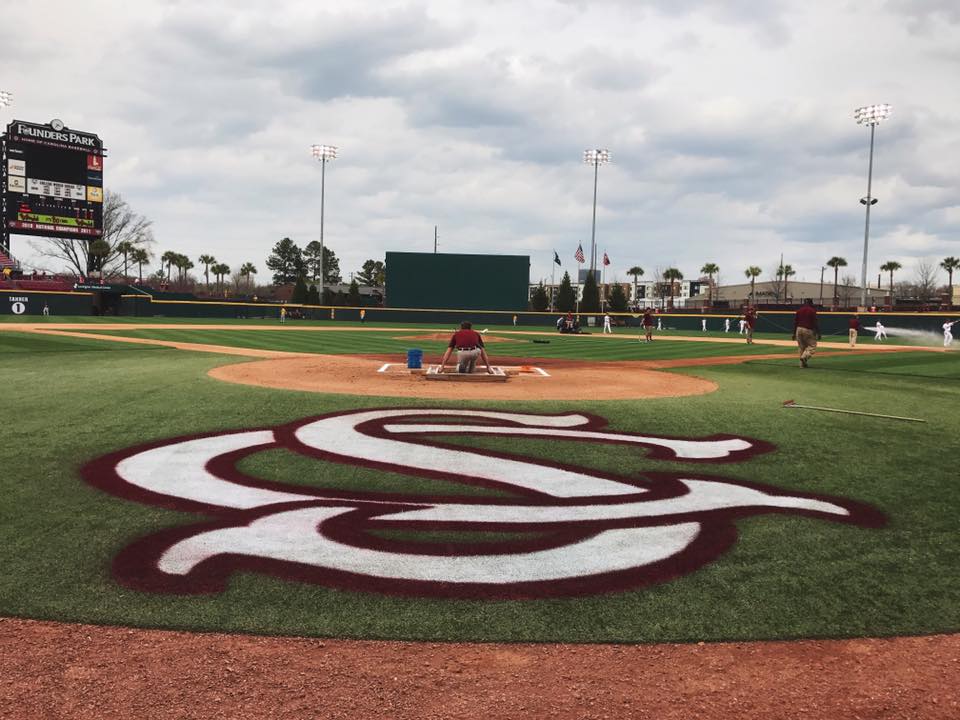 COLUMBIA, S.C. (June 30, 2017) – Mark Kingston has been named the head baseball coach at the University of South Carolina, Athletics Director Ray Tanner announced today. He becomes the 30th head coach in the history of Gamecock Baseball.

Kingston comes to Carolina following a three-year stint as the head coach at USF. He compiled a 100-78-1 record while in Tampa, helping the Bulls to a pair of NCAA Regional appearances. Kingston owns a career mark of 253-180-1 in eight seasons as a head coach, including five at Illinois State, with three NCAA appearances in that eight-year span.

Kingston has helped lead 11 teams to NCAA Tournament berths as an assistant and head coach – with four of those teams appearing in the NCAA Super Regionals, two participating in the College World Series and one winning a national championship. As a player at the University of North Carolina, Kingston was part of the 1989 Tar Heels squad that won an Atlantic Coast Conference regular-season title and advanced to the College World Series. He also helped UNC win the ACC Tournament and advance to the NCAA Regionals in 1990. As an assistant coach, Kingston helped the Miami Hurricanes capture the 2001 College World Series as the No. 1 overall seed. His 21-year collegiate coaching career also includes stops at Tulane, where he helped guide the Green Wave to the 2005 College World Series, and Purdue.

Kingston guided USF to a 42-19 mark in 2017, the first time since 1996 that the team had reached the 40-win mark. Under Kingston’s leadership, the Bulls earned their second trip to the NCAA Tournament in three years. USF won 19-straight games from Feb. 19 – March 22, the second-longest streak in program history. During that streak, USF defeated then No. 3 Florida State in Tallahassee, its first victory against FSU since 1989. On May 9, the Bulls defeated then-No. 5 Florida in Gainesville. It marked the first time in program history that the Bulls beat both FSU and Florida on the road in the same season. The victories were just USF’s second and third wins over top-five teams in program history. Kingston reached the 100-win mark at the helm of the program in the Gainesville Regional opener with a 9-1 win over Bethune-Cookman, making him the second-fastest coach in program history to reach 100 victories.

Kingston’s Bulls dominated on the mound in 2017, posting a 3.24 team ERA and allowing 7.64 hits per nine innings, both in the top-10 nationally. The pitchers led the country with 10.1 strikeouts per nine innings and set a program record with 620 strikeouts. Offensively, shortstop Kevin Merrell set an American Athletic Conference record with a .384 average, the third-straight year he led the Bulls in hitting. Merrell was named an All-American by four separate publications and was named to the AAC First Team for a second-straight year. He was one of five Bulls named to All-American Athletic Conference teams, the most since 2009. Merrell was drafted by the Oakland Athletics with the 33rd overall pick in the MLB Amateur Draft, becoming the third-highest drafted player in program history. Overall, four USF players were selected in the draft, as Phoenix Sanders went in the in the 10th round to the Tampa Bay Rays, Joe Cavallaro was taken in the 24th round by the New York Mets and Ryan Valdes was selected in the 33rd round by the Pittsburgh Pirates.

In 2016, the Bulls recorded 517 strikeouts, logging back-to-back seasons of over 500 strikeouts for the first time in school history. Merrell posted a team-high .320 batting average and a first-team all-conference selection in the AAC. Pitcher Brandon Lawson also notched over 100 strikeouts on his way to a second-team all-conference honor. The Bulls won two series against ranked teams (No. 25 Michigan State, at No. 22 East Carolina), and had three players drafted – pitcher Tommy Eveld (ninth round, Arizona), pitcher Brandon Lawson (13th round, Tampa Bay), and outfielder Luke Maglich (34th round, Philadelphia).

Kingston made an immediate impact at USF in 2015, leading the Bulls to an NCAA Regional for the first time since 2002. Kingston and his staff increased the Bulls’ 2014 win total by seven and earned the team’s first NCAA Tournament win in 13 years. Coach Kingston’s guidance helped produce four players who were drafted by Major League Baseball clubs, including pitcher Jimmy Herget (sixth round, Cincinnati), pitcher Tommy Peterson (12th round, Washington), infielder Kyle Teaf (30th round, Tampa Bay), and pitcher Casey Mulholland (37th round, Dodgers). Merrell was recognized as a Louisville Slugger Freshman All-American, and catcher Levi Borders was named to the Johnny Bench Watch list and was a unanimous selection on The American’s First Team. Herget was also named to The American’s First Team, and Peterson earned second-team honors. Merrell, first baseman Buddy Putnum, and Teaf were also named to the NCAA Gainesville Regional All-Tournament team.

Kingston came to USF with a long track record as a top-level recruiter and a producer of offensively explosive teams. He spent 2010-2014 as the head coach at Illinois State University, where he led the Redbirds to two MVC regular season championships and one conference tournament title while twice breaking the program’s season wins record. He won more than 30 games in each of his five seasons at ISU, a program-record string that included a season-record 39 wins in 2013. He reached the MVC Tournament championship game three times and compiled an overall record of 173-102 (.629 winning percentage). Kingston was twice named a “Rising College Coach” by Kendall Rogers of Perfect Game USA during a five-year tenure at Illinois State (2010-2014) in which he earned MVC Coach of the Year honors in 2010 and 2013 and helped 18 Redbirds earn First-Team all-MVC honors. Two of his players were named MVC Player or Pitcher of the Year and eight were selected in the Major League Baseball First-Year Player Draft.

Kingston led ISU to rapid success, as the Redbirds ranked second in conference wins (64) from 2010-14 while posting two first-place finishes and no worse than a fourth-place conclusion in the MVC. His overall winning percentage of .629 and average of 35 wins per season were a strong improvement over previous seasons. ISU’s average RPI rating of 69.50 from 2010-13 ranked fifth among all northern Division I programs and Kingston’s recruiting classes contained 15 players ranked in the Top-20 in the state of Illinois by Prep Baseball Report, more than any other university.

He took over the ISU program after serving one season as the team’s associate head coach and promptly posted the most successful first-year head coaching stint in program history. Kingston led the 2010 Redbirds to their first-ever share of the MVC regular-season title, their first MVC Tournament title since 1994 and their first NCAA Tournament victory since 1976. ISU’s 32-24 record was the most wins for the Redbirds since 1999.

In 2011, Kingston guided the team to a then-record season win total (36-18), including a marquee victory at Miami (Fla.), and placed seven players on the All-MVC team. The following year (2012) ISU went 33-19 and posted a 10-game win-streak, the program’s longest since 1984. Closer Kenny Long was selected by the Houston Astros in the 22nd round of the MLB First-Year Player Draft, marking three-consecutive seasons in which a Redbird was selected in the MLB draft.

In 2013, Kingston guided ISU to a program-best 39 wins (39-19), posted a school-record 12-game winning streak, won the MVC outright for the first time in school history and set a Valley-record with eight first-team All-MVC selections. Offensively, ISU paced the MVC in batting average, on-base percentage, slugging percentage and home runs and the pitching staff fired a program-record 13 complete games, including 10 shutouts.

Prior to his stint at ISU, Kingston was part of 500 wins (500-279-2) in 13 seasons as an assistant coach and was widely respected as one of the top assistants in the nation. He spent the previous seven years at Tulane University, serving as recruiting coordinator throughout his tenure and as associate head coach the final five seasons with the responsibility of overseeing recruiting, coaching hitters and developing catchers and infielders.

At Tulane, Kingston’s recruiting and coaching efforts helped the Green Wave to six postseason appearances, two NCAA Super Regionals and a berth in the 2005 College World Series. The 2005 Green Wave team was seeded as the top team overall while also receiving the top academic honor in Omaha. Tulane averaged nearly 42 wins per season with Kingston on staff.

Kingston recruited or coached seven players who became All-Americans at Tulane, including James Jurries (2002) and Michael Aubrey (2003). The Green Wave sluggers became the first hitters in 18 years to hit .400 for the season and both earned Conference USA Player of the Year recognition. Aubrey was selected by the Cleveland Indians 11th overall in 2003, the highest Tulane player ever taken in the draft.

Prior to Tulane, Kingston spent two years at Miami (Fla.), where he helped the Hurricanes capture the 2001 College World Series as the No. 1 overall seed. While at Miami, the Hurricanes finished with top-five school single-season marks in batting average, runs scored and slugging percentage, and led the nation with 228 stolen bases in 2001. In the run to the 2001 national title, the `Canes had an NCAA-best 17-0 run to end the season and set a College World Series record with 12.3 runs per game while hitting .373 as a team in Omaha.

Kingston spent one year as an assistant at Illinois State, helping the 1999 Redbirds set then-school records for wins in a season (35), runs scored, RBI, doubles, hits and walks, while finishing second in school history in home runs, total bases and batting average.

Kingston began his coaching career with two seasons at Purdue, helping the Boilermakers post three of the top-seven batting averages in school history and place five position players on the All-Big Ten team after not posting any the year before his arrival.

A 1995 graduate of North Carolina with a degree in communications, Kingston was part of the 1989 Tar Heels squad that won an Atlantic Coast Conference regular-season title and advanced to the College World Series. He also helped the team win the ACC Tournament and advance to NCAA Regionals in 1990 as a sophomore. Kingston received the Trippe Bourne “Most Dedicated Player” Award for his outstanding work ethic and leadership during his junior campaign, and was named a team captain his senior season.

Drafted by the Milwaukee Brewers out of North Carolina in 1992, the Northern Virginia native played professionally for five seasons with Milwaukee and the Chicago Cubs organizations.

Kingston attended Potomac High School (Virginia), where he developed into a Collegiate Baseball Top-50 Prospect and was drafted by the New York Yankees after leading his team to the 1988 state championship. In 2006, Kingston was inducted into the Potomac Hall of Fame.

Kingston and his wife, the former Letitia Kelly, have three children, Kailyn Grace, Cameron James and Kathryn Patricia. He also wrote and produced two instructional videos for Championship Productions, “Keys to Consistent Hitting” and “Catching Drills and Fundamentals.” He also was the only assistant coach chosen to write a chapter in “The Baseball Drill Book” produced by the American Baseball Coaches Association.

(Editor’s Note: The above communication is a news release from a government agency and does not necessarily reflect the editorial position of FITSNews.com. To submit your letter, news release, email blast, media advisory or issues statement for publication, click here).