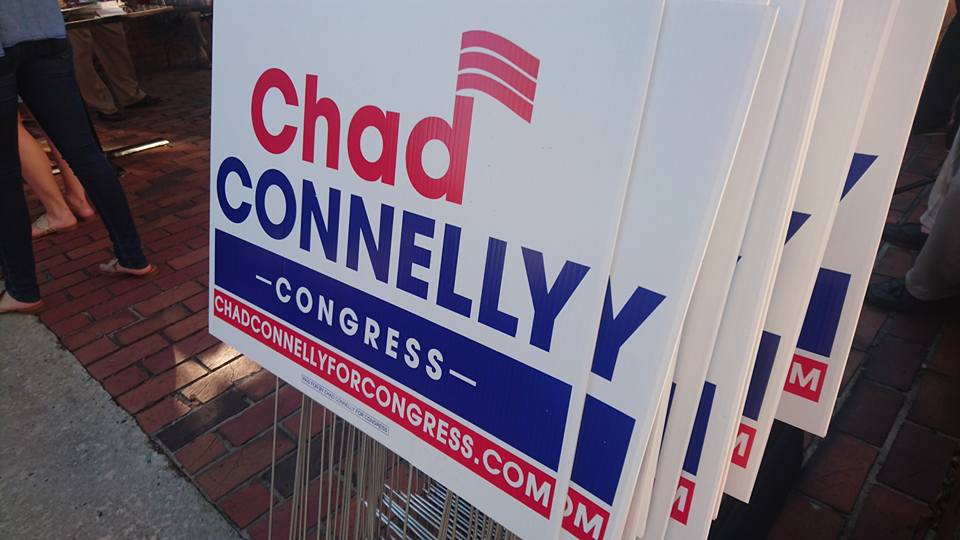 Chad Connelly – the former chairman of the South Carolina Republican Party – was paid a whopping $120,000 last year by the Republican National Committee (RNC).

What did he do to warrant such a huge salary?  Good question …

And is he still getting paid?

Yes … although most voters in the S.C. fifth congressional district were under the impression he had cut ties with the party.

Connelly’s payments from the GOP have raised questions given his status as one of six “Republican” candidates for this a GOP-leaning seat – which was vacated two months ago by Mick Mulvaney, the new director of the White House’s Office of Management and Budget (OMB).

Mulvaney captured the “Fightin’ Fifth” back in 2010 during the Tea Party wave election and held it for three successive elections – easily fending off a well-funded Democratic challenger last fall.  His decision to accept Donald Trump’s appointment earlier this year set off a crowded GOP race to replace him – one in which Connelly has been among the top tier challengers.

At least until the latest campaign finance reports were filed, that is …

According to Connelly’s latest financial disclosure report – submitted to the Federal Election Commission (FEC) earlier this week – his campaign has just over $12,000 on hand as this race hits its homestretch.

Even social conservative activist Sheri Few – whose second-tier candidacy has proven more formidable than we expected – reported having more cash on hand than Connelly.

It wasn’t just Connelly’s anemic campaign filing that interested us, though.  On a hunch we decide to sift through the candidates’ personal financial disclosure reports, which are filed with the clerk of the U.S. House of Representatives.

Connelly’s report – the first one we pulled (alphabetically) – contained an interesting item.

As you can see from the document above, Connelly reported being paid $120,004 by the RNC for work as the party’s “National Director of Faith Engagement” during the 2016 calendar year.

What sort of job title is that?   Good question … but it sounds a lot like a position that would be filled by the love child of Jimmy Lee Farnsworth (of Fletch Lives fame) and Dana Carvey’s “Church Lady.”

And let’s be honest?  Did the GOP really need to pay somebody to sway church-going Republican voters away from Hillary Clinton?

Connelly’s cushy gig isn’t what really interested us, though: It was the disclosure that he is still getting paid by the party.

In addition to his 2016 salary, Connelly reported receiving $35,000 from the RNC during the first three-and-a-half months of the current year.

Hold up … the national Republican party has been paying this guy while he campaigns in a contested GOP primary?

How is that fair?

Connelly has told voters on the campaign trail that he resigned his party post when he announced his congressional bid in mid-February.  What he neglected to tell them, though, was that he continued to be paid by the party as a consultant.

“He works as a consultant now, not a full-time employee,” Connelly spokesman Luke Byars told us.

“He resigned in February and started as a consultant after that,” Byars added.  “He resigned a week before he filed for the race.”

Yeah.  That strikes us as exceedingly deceptive … especially from a candidate trying to portray himself as an “outsider.”

Of interest?  News of Connelly’s ongoing GOP establishment payday comes on the eve of him being joined by U.S. Rep. Mark Meadows – a North Carolina GOP lawmaker who leads the fiscally conservative “Freedom Caucus” in Washington, D.C.

Meadows previously endorsed Connelly and is scheduled to campaign alongside him in the coming days.  We wonder: Are Meadows’ fellow Freedom Caucus members aware he is campaigning with a candidate who is on the GOP payroll?

To be clear: We have nothing against Connelly.  In fact, we’re not sure he wouldn’t be better on certain taxpayer issues than some of the other top tier candidates who are currently polling ahead of him in this race.

But his holier-than-thou sanctimoniousness has always rubbed us the wrong way – and the fact he’s in bed with the GOP establishment on the one hand while waving the banner of “outsider” on the other.

Well, that just strikes us as profoundly hypocritical … which we’re guessing is precisely why Connelly hoped it would never get out.

Gamecock Athletics: Contract Extensions All Around