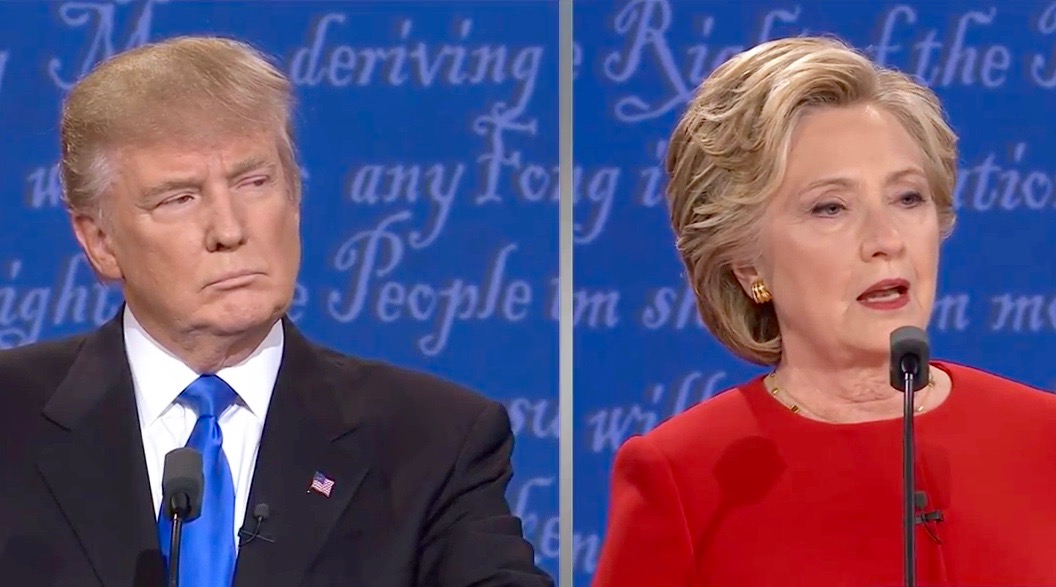 Neither candidate scored a knockout punch, though, and the exchanges between the two of them were often exceedingly sloppy due to the loose format of the encounter – which was held on the campus of Hofstra University in Hempstead, New York.

Libertarian party nominee Gary Johnson and Green party nominee Jill Stein were not invited to participate in the exchange as neither hit the fifteen percent mark in mainstream polling.

In the early stages of the debate, Trump was positively mauling Clinton – battering her repeatedly on economic issues, most notably her support for globalist trade deals.  Clinton appeared flustered while Trump leveled blow-after-blow – including an especially well-executed criticism of her flip-flop on the proposed Trans-Pacific Partnership (TPP) agreement.

As the debate wore on, though, Clinton seemed to find her footing – while Trump repeatedly found himself on the defensive, a problem he frequently compounded by returning to Clinton’s attack narratives long after it appeared as though everyone had moved on.

Capably assisting Clinton?  The “moderation” of NBC’s Lester Holt, who seemed to approach the exchange with the same objective Fox News appeared to have during the first GOP debate: Stopping Trump.

Despite several uneven responses, the GOP nominee did pack his performance with a slew of solid one-liners – language that will no doubt play exceedingly well among lower-income voters in swing states.

Trump’s best line of the night?

“Hillary has experience, but it’s bad experience,” he said on several occasions – alluding to Clinton’s many foreign policy failures as well as her support for the failed economic policies of U.S. president Barack Obama.

“Our country is suffering because people like Secretary Clinton have made such bad decisions,” he said.

Trump also hammered Clinton on the jobs issue, repeatedly referencing the ongoing outsourcing that has been particularly damaging to the economies of swing states like Michigan, Ohio and Pennsylvania.

Clinton’s line of the attack against Trump on the economy?  A tired old “trickle down” rhetorical device that has been used repeatedly against presidential candidates who support across-the-boards tax relief.

“The kind of plan that Donald has put forth would be trickle-down economics all over again,” Clinton said. “In fact it would be the most extreme version the biggest tax cuts for the top percents of the people in this country than we’ve ever had.  I call it trumped up trickle-down because that’s exactly what it would be.”

Talk about a candidate showing her age …

Clinton was more successful in slamming Trump for his refusal to release his tax returns, saying “there is something he is hiding.”

“I will release my tax returns against my lawyer’s wishes when she releases her thirty three thousand e-mails that have been deleted,” he said, a reference to the scandal Clinton can’t seem to shake.

In fact Clinton seemed to dig her hole deeper when she apologized for her “mistake” in setting up (and then scrubbing) a secret, private email server to handle her communications while serving as Secretary of State.

“That was more than a mistake,” Trump interjected.  “That was done purposely.”

All in all?  We’d call this debate a draw … which has to be disappointing to Trump given how well he started.

After seizing the initiative, the GOP nominee simply couldn’t keep it – missing multiple opportunities to deliver even stronger hits on Clinton’s failed record.  Meanwhile, he repeatedly allowed Clinton (and Holt) to get him – and keep him – off message.

Of course in the battle for swing state soundbites, we’d have to say the debate was a win for Trump – who landed his best jabs on substantive economic policy issues while Clinton’s best moments came when she was attacking him over his political incorrectness.

“This is a man who calls women pigs, slobs, and dogs,” Clinton said toward the end of the ninety-minute exchange.

Yeah … which issue do you think out-of-work voters are going to care the most about?

Trump and Clinton will face off again on October 9 at Washington University in St. Louis, Missouri.  That exchange will be moderated by CNN’s Anderson Cooper.

Gennifer Flowers Won’t Be At The Debate