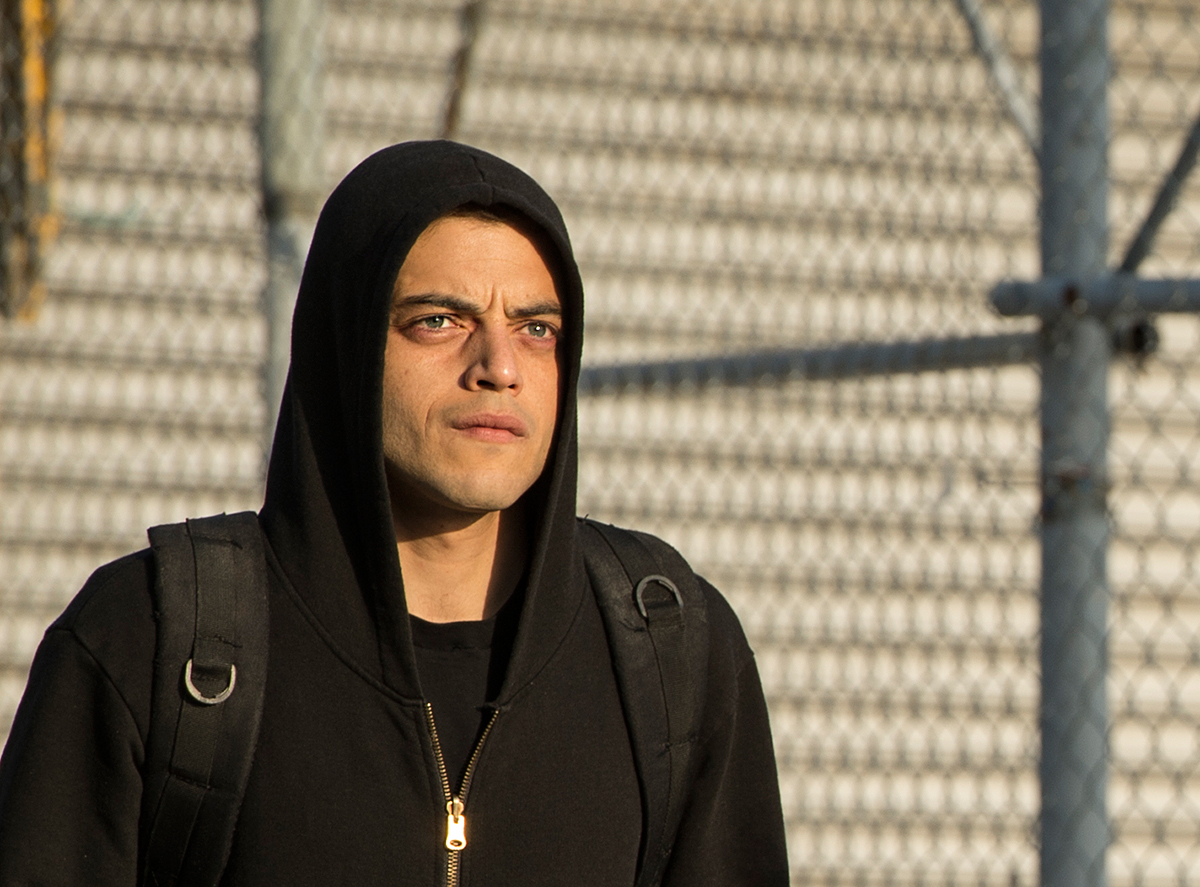 Last week we published a lengthy “What to Watch” article on Amazon’s original series The Man in the High Castle.

As we were penning that review – and contemplating future installments of this format – it struck us what a distinctly first-world problem “What to Watch” really is.

At least for now …

Seriously … the world is kind of going to hell, isn’t it?  And we all kind of know it, don’t we?   And as the storm clouds gather/ darken, it’s becoming increasingly/ painfully clear that you’re either in the shrinking ultra-minority of “the connected” – or you’re not.

And as those who are “not” work increasingly hard to make ends meet (in the jobs still left), we become increasingly obsessed with the search for distractions – especially if those distractions offer us something to believe in.  An idea to embrace.  A protagonist to cheer for.  And perhaps most importantly, an enemy to blame.

Mr. Robot – a USA Network original series – offers viewers all that and then some.

Created by Sam Esmail, the series stars American actor Rami Malek as Elliot Alderson – a brilliant cybersecurity programmer (and hacker) who is recruited by the show’s title character, “Mr Robot” to join his anarchist, “hacktivist” network.

Their goal?  A revolution unlike any other in world history.

Mr. Robot – played by Christian Slater – aims to pull off the greatest redistribution of wealth in human history by wiping away all debt.

Leveling the playing field once and for all.

Alderson is an easy mark for such a plan, too.  In addition to a host of other neuroses, he is perhaps most severely “afflicted” by a hyperactive sense of justice – an insistence on righting wrongs that compels him to use his digital wizardry to expose pedophiles, corporate cheats and cheating spouses.

Alderson’s musings about the state of the world in which we live are woven throughout the narrative of the show via a series of rambling voiceover monologues.

Here’s one in which he answers (in his head, anyway) a question  put to him by his shrink: What is it about society that disappoints you so much?

Oh, I don’t know, is it that we collectively thought Steve Jobs was a great man even when we knew he made billions off the backs of children?  Or maybe it’s that it feels like all our heroes are counterfeit, the world itself just one big hoax.  Spamming each other with our running commentary of bullshit masquerading as insight, our social media faking as intimacy.  Or is it that we voted for this?  Not with our rigged elections – but with our things, our property, our money.  But I’m not saying anything new. We all know why we do this.  Not because earrings or the Hunger Games books makes us happier.  But because we want to be sedated. Because it’s painful not to pretend.  Because we’re fucking cowards.  Fuck society – but I’ve said that already.

If you’re looking for mindless entertainment, Mr. Robot probably isn’t for you.  If, on the other hand, you are looking to be challenged – or looking to see someone challenging the prevailing preconceptions and pernicious realities of our time, by all means check it out.