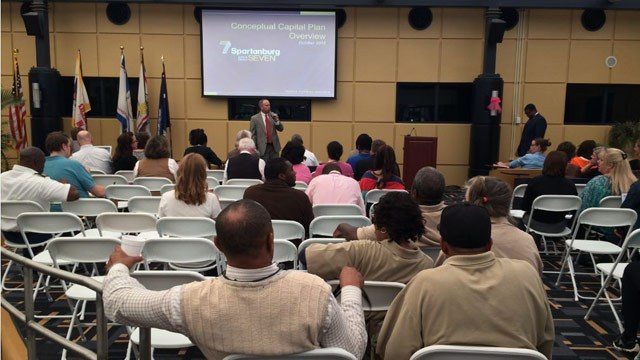 There’s a bond referendum on the ballot in Spartanburg, S.C. this week – and all of the local officialdom is singing its praises.  The liberal local paper has offered the referendum its full-throated support – both editorially and in its exceedingly biased “news” coverage.

“Spartanburg County School District 7 leaders have created a responsible and visionary plan for providing educational facilities to children in the district for the foreseeable future,” the paper opined this week.  “District residents should approve that plan in Tuesday’s referendum.”

“It makes little sense to vote no,” the editorial added.

Meanwhile a front-page “news story” on the referendum touted its support from “ministers, political leaders and community members.”  The old “bandwagon effect.”

What’s on the line here?  A whopping $185 million in new borrowing – which will be paid off via higher property taxes on owner-occupied homes, vehicles and commercial/ rental property.  What do officials propose to spend that money on?  More cathedrals of failure …

Here’s the thing, though: We’ve spoken to conservative and liberal activists in the Spartanburg area – and they’re telling us the same thing.

Something’s “off” with this election.

First of all, there’s been an embarrassing lack of scrutiny regarding the basic financial underpinnings of this deal, the process by which it has been approved for a low-turnout election date and the special interests pulling the strings behind the scenes.

Seriously: Isn’t it the job of local media to dig on referendums this?  As opposed to cheerleading for them?

First of all, if you remember your recent history Spartanburg School District 7 (yes, they have seven friggin’ school districts in one county) was the bureaucracy busted seven years ago using tax dollars to install a new putting green at the private country club where its school board members played golf.

First, let’s look at the financials of the deal.  While the $185 million covers the construction phase of the bond, it’s far from the total tab.  That’s closer to $500 million.  Also, the tax hike that’s being discussed in the media would only last through the construction phase.  In 2023, the hike would dramatically climb – and stay at its elevated level through 2047.

“If you own a $100,000 home you should get a $256 tax decrease. But that won’t happen if this boondoggle passes,” tax hike opponent and retired U.S. Navy officer Barry Hull wrote on his Facebook page.  “Your taxes, for this bond package alone, on a $100,000 home will go up an additional $296 per year.  And that tax applies to all other property as well, so your overall tax burden will be much higher.”

According to Hull, the justification for this exorbitant tax hike is dubious at best.  At worst, he claims it is a deliberate dereliction of the district’s obligations to current students – all in an effort to fabricate the need for costly new structures.

“Humans have been plugging leaks in roofs, repairing drafty rooms and cleaning mold for thousands of years. It’s actually not that difficult,” Hull wrote.  “So the next question might be, ‘Why would they let the roof leak when the repair is easy?’ The answer is because letting your current building fall into a state of disrepair is the best way to get a construction bond passed.”

Hull also ripped the engineering firm who conducted a “facilities study” in advance of the referendum.

“They conclude we need a new school because that conclusion puts millions of dollars in their pocket,” he wrote. “Actual engineers determined the complaints to be cosmetic, NOT structural, and easily remedied.”

Both board members voted to put the referendum on the ballot, incidentally – and neither conflict has been mentioned once by the local liberal press.

“No one likes to be duped, but unfortunately the slick talkers on the proponent committee have done just that,” Hull concluded.  “They have duped many good people into believing that this is about the education of our children. It is not. It is about lining the pockets of fat cats and cronies with hundreds of millions of tax payer dollars while leaving future generations to pay the debt. And all the while telling us it’s ‘for the children.'”

Conservative activists aren’t the only ones questioning the cost, timing and motivation of this referendum.

“All the pro-referendum people are saying, ‘Oh, it’s the tea party complaining,'” one liberal activist told us.  “I’m not in the Tea Party and I think they are raising justified conflicts that at least should be looked into.”

The activist also questioned the referendum’s call for a new elementary school to be located in the midst of some recently-renovated mill apartments.  The location of the proposed school has many questioning whether favor is being shown to a politically-connected development firm.

Not only that, there’s the question of the election’s timing.  First introduced to voters in October of 2015, last month it was placed on the ballot and the voting will take place March 15 – a.k.a. tomorrow.

“They did a good job of getting it in under the radar,” the liberal activist noted.  “Which is always a sign that something smells.”