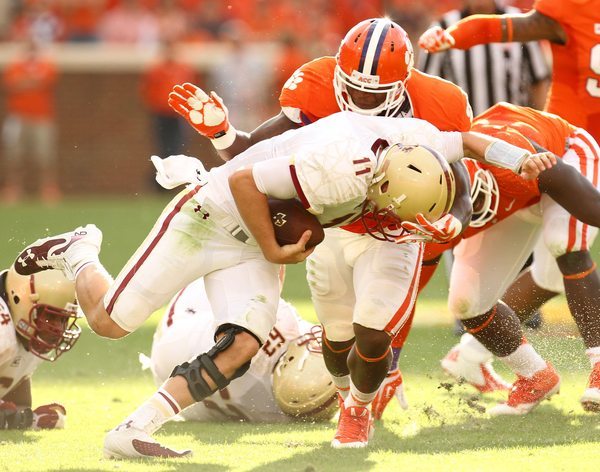 || By FITSNEWS ||  Clemson University saw two of its defensive stars taken in the first round of the NFL draft in Chicago, Illinois this week.  Standout defensive end Vic Beasley – the ACC Defensive Player of the Year in 2014 – was chosen No. 8 overall by the Atlanta Falcons, while linebacker Stephone Anthony was selected with the 31st pick of the draft by the New Orleans Saints.

“Vic called his shot,” Clemson Head Coach Dabo Swinney said.  “When I  saw him … he had a red and white suit on.  I asked him about wearing those colors and he said they are the colors of the Atlanta Falcons.  That is where he wanted to go and where he thought he would go.”

An Adairsville, Georgia native, the back-to-back All-American had an amazing NFL combine performance in 2015 – silencing his critics (including us).

Anthony – Clemson’s leading tackler in 2014 – was a first-team All-ACC performer with ninety total stops (including 10.5 tackles for loss).

Clemson has seen two players selected in the first round of the NFL draft on two previous occasions.  Following the school’s 1981 national championship, defensive tackle Jeff Bryant and wide receiver Perry Tuttle both went in the first round.  Three years earlier, wide receiver Jerry Butler was taken by the Buffalo Bills and quarterback Steve Fuller was chosen by the Kansas City Chiefs.

Clemson has had a first round selection in each of the last three drafts (Beasley and Anthony in 2015, wide receiver Sammy Watkins in 2014 and wide receiver DeAndre Hopkins in 2013).

In other draft news, Heisman trophy-winning quarterbacks Jameis Winston of Florida State and Marcus Mariota of Oregon were selected first and second overall, respectively, with Winston going to the Tampa Bay Buccaneers and Mariotta going to the Tennessee Titans.

Beasley and Anthony will obviously be missed in Tigertown this season, but Clemson recruiting has been on a roll … far outpacing the talent level brought in by in-state arch rival, The University of South Carolina.

Last year, Gamecocks’ defensive end Jadeveon Clowney was taken with the first pick of the draft – although his first season with the Houston Texans was a wash due to nagging knee problems.  Clowney underwent a risky microfracture procedure last December in the hopes he will be ready to play in 2015.

This Is The National Pastime?