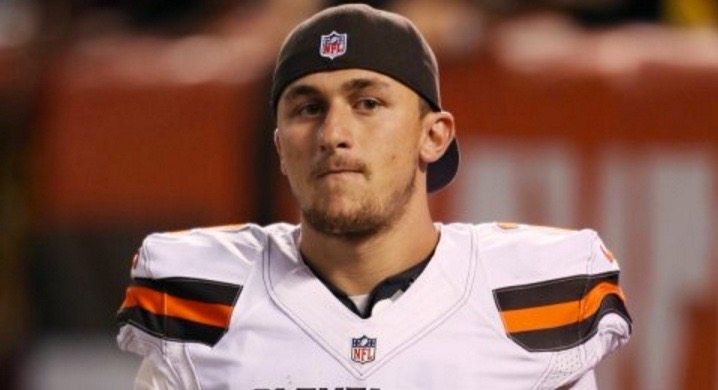 QUARTERBACK ON THE OUTS IN CLEVELAND

At the apex of the Johnny Football legend in 2012, there was an expression which embodied his wide open approach to the game.

Well, it looks like the brash signal caller might need to come up with a “Plan B” after all …

Johnny Manziel – the Texas A&M superstar selected by the Cleveland Browns with the No. 22 pick of the 2014 NFL draft – is on the verge of a flameout to rival that of Ryan Leaf or JaMarcus Russell.

The 2012 Heisman Trophy winner will be released by the Browns in March, sources close to the team are confirming to ESPN.  Why would they wait?  Well, that is the soonest they can get rid of him and remain within the league’s salary cap regulations.

“We’ve been clear about expectations for our players on and off the field,” a statement from the Browns’ organization noted.  “Johnny’s continual involvement in incidents that run counter to those expectations undermines the hard work of his teammates and the reputation of our organization.  His status with our team will be addressed when permitted by league rules.  We will have no further comment at this time.”

What did Manziel do this time?

According to police in Fort Worth, Texas, he had an “altercation” with his ex-girlfriend Colleen Crowley last weekend that ended with police using a helicopter to search for him.

Manziel was not arrested in connection with the incident, but an investigation into an alleged assault is ongoing.

This is the second domestic incident involving Manziel and Crowley – and apparently the Browns have finally had enough of all the drama associated with their maturity-challenged quarterback.

Manziel appeared in fourteen games over two seasons in Cleveland – completing 147 of 258 passes for 1,675 yards and seven touchdowns.  He also threw seven interceptions en route to a career 74.4 passer rating.  Manziel also had 259 yards on 46 rushing attempts – with one rushing touchdown.

He compiled a 2-6 record as the Browns’ starting quarterback.

We’re sad to see the first chapter of Manziel’s NFL career end this way.  He was one of the most electrifying quarterbacks the college game has ever seen – and we were hoping to see him showcase his skills at the next level.

Whatever his on-field future holds, we just hope he gets his act together off the field …

I looked up the definition of self destruction today and say a picture of Johnny Football.

Will Colleen Crowley still be with Johnny Manziel once he loses all his money and is no longer able to be gainfully employed?

Textbook definition of a punk.

He doesn’t need football. Family money and a life of privilege make the road to adulthood almost insurmountable. If domestic abuse is an issue, Johnny Felon needs a visit to the big house.

He is a closet queen, so acting out is normal.

Gee, Coach Muschamp should hire him as an Assitant Assistants QB Coach. Muschamp has spent millions on assistant coaches coming in at 4 on coaching staff strength…yet is ranked 74 in recruiting class strength? Coaches don’t play on the field. Damn you Tanner, get John Harbaugh in 2018. Fuck Muschamp

Infidel douchebag, this is what happens when you do not follow the teachings of Muhammad.

When the inevitable happens, there will hand wringing and lamentations wondering how “we” let Johnny down. In the famous words of Plato, “A douche bag gets what a douche bag has coming to him”, or something like that.

His actions on the field when he was at Texas A&M should have given people an indication as to what kind of nut this person is now.
Great talent. Miserable attitude.