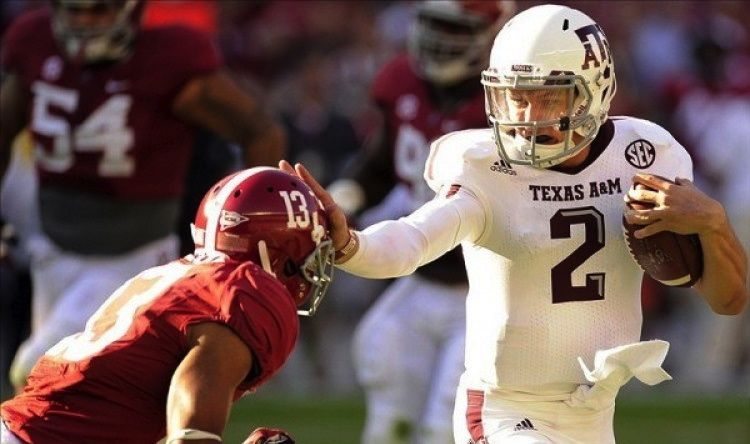 When we first started following Texas A&M quarterback Johnny Manziel, a friend of ours offered up a pretty concise summation of the 2012 Heisman Trophy winner’s modus operandi: “Johnny Football. Born to ball. No plan B.”

Well, Johnny Football might want to start working on a “plan B …”

For those of you who haven’t been following his tumultuous offseason, Manziel appears to be on the brink of a full-blown meltdown. He’s pleaded guilty to a 2012 arrest for his involvement in a bar fight. He was forced to leave Peyton Manning’s passing academy after he overslept or became too “dehydrated” – depending on which excuse you believe. He got a parking ticket and proceeded to freak out on Twitter – saying “sh*t like tonight is a reason why I can’t wait to leave College Station … whenever it may be.” His prior treatment for alcoholism and anger issues has been exposed.

Most recently (and most seriously) Manziel has been accused of taking money in exchange for autographing memorabilia, which would be a direct violation of NCAA rules prohibiting athletes from accepting cash for “promoting or advertising the commercial sale of a product or service.”

According to one report, Manziel was paid $7,500 to sign Texas A&M helmets while attending the Walter Camp Football Foundation in New Haven, Connecticut. Assuming an NCAA investigation were to find him guilty of violating this rule, Manziel could be declared ineligible for the 2013 season.

“A single alleged incident is one thing, but add it all together and NFL executives see major red flags,” ESPN’s Ashley Fox wrote. “Whenever Manziel decides to leave college, the question will be: Is any team be willing to spend a first-round draft pick on him, guarantee him millions of dollars and make him the face of their franchise after how poorly he has responded to fame so far?”

In 2012, Manziel put up astronomical numbers against the best competition in college football. He completed 295 of 434 passes (68 percent) for 3,706 yards and 26 touchdowns. The 6-foot-1, 200-pound Kerrville, Texas native was every bit as successful running the football – amassing 1,410 yards and scoring another 21 touchdowns.

On the strength of Manziel’s Heisman season, Texas A&M posted an 11-2 record – capped by an emphatic 41-13 drubbing of Oklahoma in the Cotton Bowl. Manziel is also the main reason the Aggies are entering the 2013 season ranked No. 6 in the nation.

This website has made it clear we think NCAA rules regarding collegiate athletes are ridiculous. We’ve also made it clear we don’t believe higher education is a core function of government – and that public institutions ought to be privatized. Were those two things to happen, there would be no problem with Manziel selling his autographs – or getting paid to play football for Texas A&M.

But while government-funded institutions and the NCAA condemn thousands of players each year to the modern-day equivalent of indentured servitude, the free market is still alive and well when it comes to top players being drafted and signed to National Football League teams. And Manziel’s stock in that regard is slipping … precipitously.

We hope Johnny Football gets it together. He has the potential to be the most exciting pro quarterback prospect since Michael Vick – but he’s burning through that potential at a frightening clip. And if he wastes his chance and truly has no “plan B” – well, that’ll just be depressing.

Danny Ford To Be Honored