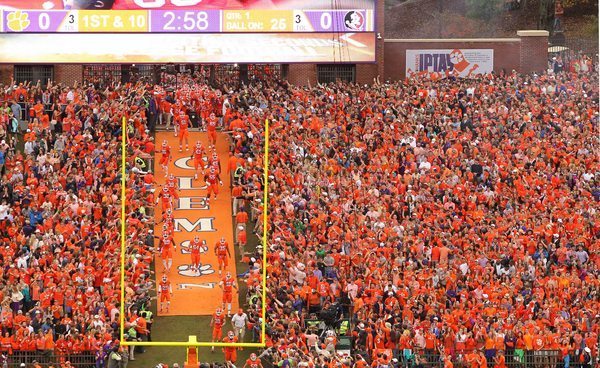 TOO MUCH JESUS IN TIGERTOWN?

Clemson University’s football team came up just short in its bid for a national championship this week … but the program’s rise to national prominence is reenergizing its opponents.

And no, we’re not talking about Twitter trolls from its arch rival, the University of South Carolina.

We’re referring to the Freedom From Religion Foundation, a Wisconsin-based group which filed a complaint against Clemson and head football coach Dabo Swinney back in 2014.  That complaint accused Swinney of appointing a team chaplain, scheduling team devotionals and providing transportation for players to Christian church services, among other “offenses.”

“We don’t think the university has taken appropriate corrective action,” an attorney for the group said this week.  “We still have concerns about how that program is being conducted. The university needs to appropriately monitor religious activity in the program.”

In fact the group plans on suing Clemson to make sure it does just that.

A year ago, Swinney – a vocal Christian – pointedly addressed these criticisms, saying “ain’t nothing (going) to change.”

“We’ve never tried to force anything on anybody,” he told The (Charleston, S.C.) Post and Courier.  “Everybody who comes here to Clemson knows who we are as people.  There’s no surprises in that regard.”

As much as we hate to give such political correctness the time of day, the God-haters have a point here.  As long as government remains in the business of higher education – and by extension the business of major college football – there are going to be grounds for lawsuits like this.

Of course Swinney has the First Amendment right to profess his faith publicly – and share it with others as he sees fit.  And as long as there’s no evidence his religion is impacting the discharge of his professional duties, then he has a compelling religious freedom argument to counter these criticisms.

But again … all of this leads us back to our fundamental point: That government has no business being in the higher education business, period.  The sooner it extricates itself from that business, the sooner we can stop wasting time addressing nonsense lawsuits like this one.