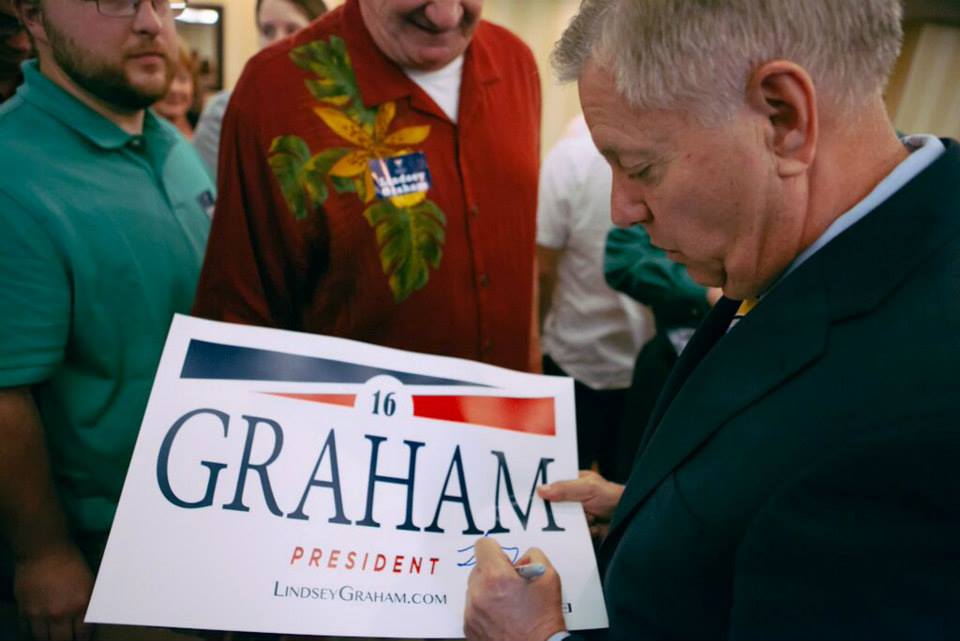 WARMONGER SET TO DROP OUT OF 2016 CAMPAIGN

U.S. Senator Lindsey Graham met with key staffers on his presidential campaign this week and told them he no longer has the resources to continue paying them, multiple sources in the liberal warmonger’s obit … errr, orbit told us.

These same sources told us Graham could announce the official suspension of his 2016 bid as early as this week.

To say Graham’s presidential aspirations never took flight would be a colossal understatement.  He’s been polling at or near zero percent in national polls for months – and last month he failed to make the cut for the second tier “Republican” debate (a.k.a. the “kiddie table”).

Graham has also failed to earn the support of his own constituents, averaging an anemic two percent in South Carolina according to the latest aggregate polling data from Real Clear Politics.

Yet what Graham lacks in popular support in the Palmetto State, he commands in institutional obedience – as evidenced by the dozens of South Carolina politicos who have refrained from jumping into the presidential fray for fear of reprisals from the notoriously thin-skinned politician (who has five years left on his U.S. Senate term).

The moment he drops out, we expect a flood of South Carolina endorsements to be announced … most of them likely to accrue to the benefit of the Jeb Bush and Marco Rubio campaigns.

What’s next for Graham?

Well, his long-term goal of positioning himself as a viable candidate for Secretary of Defense in a GOP administration (let’s be honest, he was never really running for president) certainly appears to have taken a substantial hit.

Which is a good thing in light of the failure of his “invade everybody” foreign policy and the less-than-savory “allies” he has engaged in America’s failed War on Terror.

If a candidate drops out and no one is around to hear it, does it make a sound?

Not that facts matter to you anyway.

You’ll have to consult with the men in the bathroom stalls in DC to find out if he makes a sound when pulling out.

Actually, it wouldn’t be totally out of the question for him to get a position in Hillary’s administration, if she wins.

He was running at least partly to help Jeb, but Bush sank like a stone before it got that far.

You do realize that when you went to the polls and hit the straight ticket Republican option, you inadvertently voted for Graham, right?

When Graham officially announces that he is out of the race, I bet there will be a stampede by the other candidates to gather in his support in the polls…OOPS…hold on a minute…never mind.

What happened to all the Trump pieces? He’s the one making the headlines.
Those are fun to laugh at, at least. More stupid Trump stuff, please!

I thought he wanted to be “a secretary”, not “the Secretary”.

If the voters of South Carolina would sack his ass I’m sure some defense contractor would hire him as one. He could even wear a skirt to the office.

I would say, great news but there is nothing great about Grahamnasty just another turd down the drain. Let’s see: he was re elected in 14, that means he has three more years to act like a Democrat then two years to act like a half assed Republican before we get another chance to rid our great state of this POS. WOW, I’ve gotten into a rut, it looks like he brings out the excretory part of me. LOL

Now he will have more time to be on the Sunday Shows.

His contractors, consultants and advisors made a fortune, as was planned and he is positioned for his dream job.

So, this is a successful venture for a politician. However, it sucks for those people he was elected to support.

He is such a silly man.

All’s I cans say is let Sic Willie & Graham go “toe to toe” in a boxing ring and see what would develop…
it’s the only real way to see how it would turn/settle out
And my money is on Graham………..

Ass-to-mouth Graham is like Obama & the entire U.S. Congress, a flunky of the Zionist cabal. He goes to bed every night dreaming about things to do for Israel.

Senator Graham at home & if you watch closely at the 40 second mark you can see his boy play thing in the background. Though an attempt has been made to delete him. https://www.youtube.com/watch?v=ttGsjv4uBwc