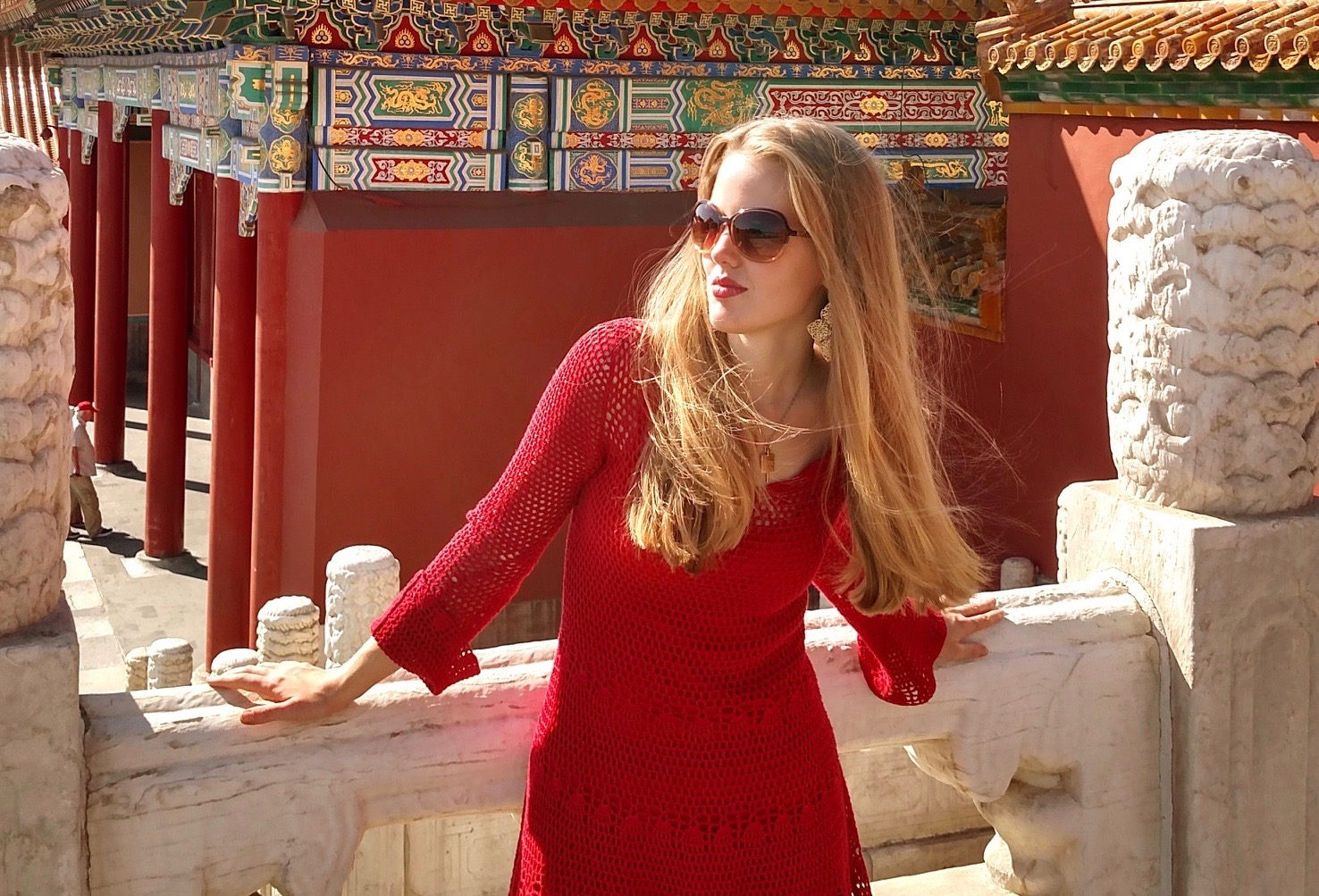 “DISPATCHES FROM A BLOND IN BEIJING”

|| By EMILY CONRAD || Beijing is perhaps the safest place to live during times of global insecurity.  At every metro station, in times of anxiety and peace alike, every traveler must go through a security check.  At the train station, there are tall platforms manned by soldiers with automatic weapons to maintain order. Police and “citizen watchdogs” seem to be on every street corner, the latter wearing yellow armbands with red Chinese characters over their everyday clothes. Sometimes during more politically sensitive times, like before the military parade in September, all hazardous materials are banned from sale, including kitchen knives.  The acceptance of refugees is a foreign concept; it is difficult enough for university-educated foreigners to make their way into the Middle Kingdom.

If one really analyzes any Beijing street scene, one would doubtlessly see security cameras.  Moreover, it is widely accepted among the Chinese population that all of their communication can be monitored – for the sake of security, of course.

In August I arrived in Beijing to begin a year of graduate studies in international relations at Tsinghua University as a Chinese Government Scholarship recipient. My experience living and studying here has challenged truths which I formerly believed were self-evident.  As an American, I have been raised to treasure rights and liberties above all else.  I was taught that a bad government was one that undermined the individual.  However, now living under a communist government with limited rights, I am surprised that I do not feel restricted or in an unsafe environment.  This discrepancy between what I believe about government and what I am currently experiencing is prevalent among many westerners in China.  It is also the key to understanding one of the greatest desires of the Chinese Communist Party.  It wants the West, particularly the United States, to recognize the legitimacy of its government and economic model.  Alternatively, most Westerners view the communist form of government as a flawed system which must be changed in order to allow the country’s own citizens to prosper.

In other words, the purpose of a government is to “do good.”

Past these core functions, people differ on their opinions of government, leading to intense political debate.  Some believe that individual rights and liberty should supersede all else and advocate limited government interference, allowing capitalistic market forces to run their course, even if it creates what we refer to in economics as negative externalities.  Others believe that the government needs to take a guiding role in developing social infrastructure – developing such institutions as an education system, a health care system, and an interstate transportation system.  These people believe that when the free market is the sole actor in the social infrastructure, there are winners and losers, which ultimately does not contribute to long-term growth.  Then, there are those who believe in strong government involvement and that the government apparatus must be actively engaged to create a better society.

The definitions of a better society vary between country and culture – from sharia law in the Arab World to laws dictating the behavior of individuals and private businesses in the United States.

The question thus becomes, can we clearly define a “good government” from a “bad government?”  In the West, we are inclined to believe that all democracies are good and all socialist or communist countries are bad.  Yet, there are clearly exceptions to this rule.  Venezuela was one of the most stable democracies in the world when Hugo Chavez rose to power in 1998 – and the country still remains, at least nominally, a democracy.  Instead of judging countries on their nominal government type, the Chinese would argue that it might be helpful to analyze countries instead by how well they achieve their function of domestic lawfulness, international security, and economic prosperity.

China has done well on all of these accounts, particularly with economic prosperity. In 1979, President Deng Xiaoping began the slow process of China’s opening to the West and embrace of capitalism. The transition was spurred by two separate philosophies:

“It doesn’t matter if it is a black cat or a white cat, as long as the cat is good at catching mice.” This quote was the justification for transitioning to a market economy under communist rules.

“Cross the river by feeling the stones.” This quote expressed China’s intention to implement market reforms slowly, by testing them out first and not introducing them before the country was ready. The capitalistic market reforms conducted by both of these strategies have led to Chinese gross domestic product (GDP) rising at an average rate of 10 percent per year since 1979 and over 679 million people lifted out of poverty. China often refers to itself as having “socialism with Chinese characteristics,” not as a socialist country, in order to incorporate its unique blend of capitalism.

I recently attended a roundtable discussion with prominent Western and Chinese scholars following Chinese President Xi Jinping’s visit to the United States. During this event, the Chinese admitted their frustration with the United States’ continued desire that China adopt a more democratic system, the root of which they believed was a lack of respect for what their current system under the Chinese Communist Party has achieved. Would democracy have served China better in its past history? There is really no way of knowing. Would democracy serve China better in the future? This is likewise a question that I have difficulty answering. Chinese citizens do not have an understanding of democratic culture or what it means to vote, making any sort of hypothetical transition unstable.

Regardless of your opinions on different types of governance, in a world where China is gaining more and more power in the international sphere, it is important to understand what the Chinese want. The Chinese want their government and economic system to be legitimized through western approval. While this may seem like an easy enough concession for the West, to do this could potentially come at a high price.

If the United States was to ever recognize China’s system as legitimate, it would possibly alter the world order by delegitimizing the democratic, capitalistic system that the United States has been actively promoting. In order to make sure that this does not happen, we need to be absolutely certain that our form of democracy can compete and provide the world’s citizens with just as good, if not better, economic opportunities than the Chinese system. Is the United States ready for this sort of challenge? Whether it currently is or not, we need to be ready when the time is right. Our elected officials should already be thinking strategically about the future and how our values of democratic, individual rights will be able to compete internationally.

Emily Conrad works in communications for an international textile firm in Spartanburg, S.C. A Phi Beta Kappa Wofford College graduate, she is the founder of book blog, Global Book Challenge.  If you have any questions about China you would like to ask her, please send them to Will Folks (email here) – who will forward them as appropriate and as time permits.