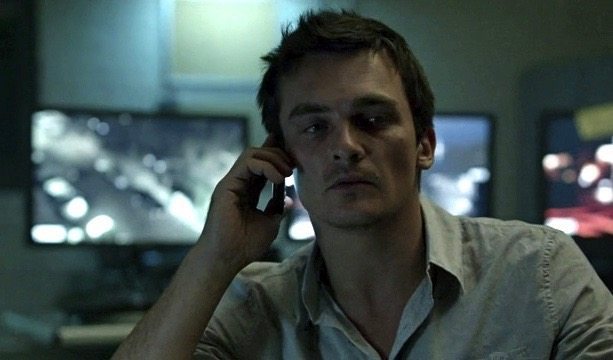 A SOLUTION FOR THE “END TIMES” WAR WITH ISIS

We don’t watch Showtime’s Homeland, although we’ve heard from those who do that we should.  And judging from the first clip of the show anyone has forwarded us, they’re absolutely right …

The clip below is taken from the first episode of the show’s fifth season (currently airing), and features fictitious Central Intelligence Agency (CIA) black-ops agent Peter Quinn (portrayed by English actor Rupert Friend) outlining the options for addressing the rise of militant jihadists.

All we can say is … “wow.”  Also, we’re doubly impressed that Quinn (according to his Homeland Wiki bio) attended our founding editor’s alma mater, The Hill School in Pottstown, Pennsylvania.

The two options presented by Quinn for addressing ISIS are worth discussing.  The first option – putting 200,000 U.S. ground troops (and an equal number of doctors and teachers) in Syria – is the path favored by America’s military industrial complex, whose warmongers are eager to continued reaping huge profits from the war against ISIS.  It’s basically the path we’ve followed in Afghanistan and Iraq.

The second option – dubbed “hit reset” (a.k.a. pounding the ISIS stronghold of al-Raqqa “into a parking lot”) – is a new option.

Years ago another fictitious monologue from the hit program The West Wing addressed the militant jihadists.  Its conclusion?  “They’ll like us when we win.”  The “hit reset” option looks at the situation a bit differently.  Specifically, it concludes as follows:

That’s a hard truth – but it’s truth nonetheless.  And as the “end times” battle of which Quinn speaks continues ramping up, we believe it is an option America’s leaders should begin considering more seriously as opposed to throwing more of our blood and treasure into the cauldron.

Here’s the thing: Many confuse this website’s support for non-interventionist foreign policy as being dovish.  Rest assured, it is not.  It is purely fiscal in nature (much like our opposition to opening America’s borders to a flood of Middle Eastern refugees).  We simply don’t believe it makes sense to spend trillions of tax dollars that we don’t have on wars of occupation that have failed to do anything but make our enemies stronger and angrier at us.  Nor do we believe it makes sense to spend hundreds of billions of additional money we don’t have defending Israel and other countries while simultaneously flooding the region with weapons (many of which wind up in the wrong hands).

We cannot afford to continue these ill-conceived policies.  Nor can we afford to launch another Middle Eastern invasion/ occupation.

So what to do?  Here’s what we would recommend …

U.S. leaders should immediately agree to cease any and all offensive operations against ISIS and remove all U.S. military assets from the Middle East.  More importantly, America should stop subsidizing the defense of Israel and the weaponization of various factions in the battle for Middle Eastern supremacy.  We should pull out of the area completely, in other words.

Why?  Because our strategy there has failed (at a colossal price tag) … and it will continue to fail moving forward.  Guaranteed.

In exchange for this concession (which our nation’s current fiscal situation necessitates, it’s worth noting), ISIS will vow to never again target Americans at home or abroad – including our tourists, our flagged vessels, etc.  In fact, its caliph will issue a fatwa expressly and permanently condemning violence against America and her citizens in acknowledgement of our support for self-determination in the Arab world.

Basically it’s like this: We agree to stop trying (and failing) to “make the world safe for democracy,” and they agree to leave our democracy – such as it is – alone.  Or else.

Which is where Quinn’s “hit reset” comes into play, albeit on a much broader scale than the mere razing of al-Raqqa.  If ISIS refuses to reach this accord – or if it accepts the terms of America’s ultimatum and then carries out attacks against U.S. citizens anyway – then the population centers of the Arab world will be subjected to the most deadly, disproportionate retaliatory violence ever unleashed by one group of human beings against another.  We’re talking about the wholesale slaughter of tens of thousands – possibly hundreds of thousands or millions – including the use of nuclear weaponry to accomplish the objectives if necessary.

That’s right … and the collateral damage would be based on a simple ratio: Kill one of us, we kill a thousand of you.  Women, children – we don’t give a f*ck.

Some believe such a strategy is cruel.  Others might regard it as being unrealistic (believing Islamic militants will never consent to rescinding jihad against the infidels in America).

Maybe so.  But it is a strategy.  And if it fails, it will have been the choice of the jihadists to plunge the world into this new darkness …

The bottom line is simple: ISIS is playing the game with the simple objective of killing everyone who isn’t a Muslim.  And the only way to fight an enemy like that is to offer them the same choice.

Stop the violence – or be consumed by it.