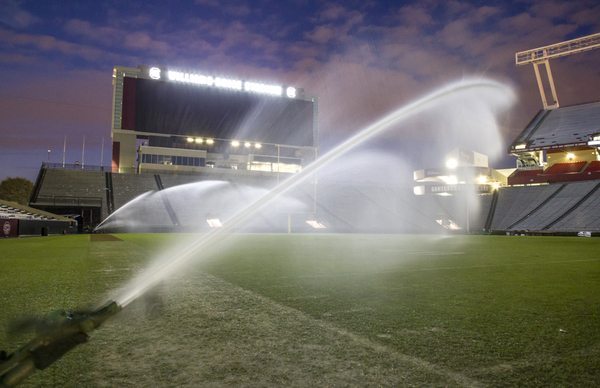 As the University of South Carolina seeks to find a long-term replacement to legendary head coach Steve Spurrier – who announced his resignation earlier this week – it must confront some painful fiscal realities.

Chief among them?  A massive $150 million in athletic department debt – one of the highest levels of debt in the nation.

“That’s standard in terms of having debt but that’s a little bit high,” ESPN’s Darren Rovell noted this week.

Rovell added that the Gamecock’s red (garnet?) ink could be a major impediment in the program’s search for a new coach because it restricts the likelihood of facilities expansions.

“What does that mean?  It means you can’t really do as much as you want with facilities because you are running out of the ability to – to get money lent to you,” Rovell said.  “That might be a negative for a coach coming in – to be able to keep up with the Joneses.”

South Carolina’s athletics department was slated to bring in $101.7 million during the 2014-15 fiscal year – with projections of $106 million for the current fiscal year (2015-16).  Roughly one-third of that total comes in the form of payouts from the Southeastern Conference.

Last year the program paid out $10 million toward its debt … which is capped at $200 million at the state level.

The Gamecocks consistently rank in the bottom half of SEC schools in terms of budget – but among the top third in debt.

Of course they play in, well, South Carolina … where fiscal recklessness is par for the course in state government.  And where even athletic budgets are replete with wasteful projects (and where taxpayers still pick up sizable chunks of coaches’ multi-million dollar salaries).

Which brings us to our main point: As we noted last fall, college football is a business – one that should be subject to an un-manipulated marketplace, not some quasi-government scam in which dirt poor athletes (and taxpayers) are brazenly taken advantage of.  The same is true of higher education in general.

It simply isn’t a core function of government …

We’ve said it before, we’ll say it again: These institutions must be set free to pursue their destinies in the private sector.  Because the last thing we need is state leaders manipulating a debt limit or transferring budget funds in an effort to hire a better football coach.

Which reminds us, the more taxpayers get nickeled and dimed, the less likely they can afford football tickets … especially for a team that was already trending downward prior to this season’s implosion.

Shawn Elliott For The Win