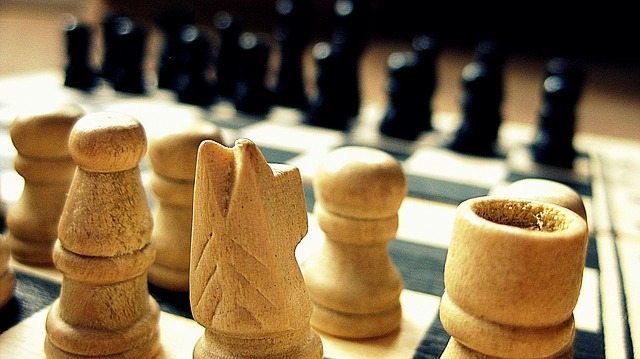 I have a long history with the game of chess.  My dad taught me how to play as a young boy – on both a real live board and on the first personal computer our family ever owned (way back in the mid-1980s).

A decade later during breaks at my first after-school job (hauling boxes of frozen chicken at a Columbia, S.C. refrigerated warehouse), I tested my skill daily against a black grandmaster named Marvin.

Marvin had a pocket-sized chess board consisting of small plastic pieces with magnetized bases.  It probably sold at the time for less than a dollar.  How good was he?  Very.  In fact he would routinely set me up by deliberately sacrificing his queen (the most powerful piece on the board) in order to gain a strategic advantage regarding the positioning of other pieces.

“I play better without my b*tch,” he would say.

Anyway, I rarely get to play anymore … which is too bad.  Every once in awhile I’ll go up against the computer on my iPad, invariably losing in less than forty moves (although I’ve played it to a draw a couple of times).

It’s a fun game … it’s also becoming increasingly popular around the world thanks to No. 1 player Magnus Carlsen of Norway – the reigning world champion in classical, rapid and blitz chess.  Carlsen, 24, has a current FIDE (Fédération Internationale des Échecs) rating of 2876 – just off of his peak rating of 2882, which is the highest score in history.

Why write about this now?

Because Berlin is currently hosting the World Chess Rapid and Blitz Championship.  In addition to welcoming current champions, the event also pays homage to great players from the past including the late Bobby Fischer and Russian chess legend Boris Spassky.  In fact the opening ceremony of the championship featured the German premier of Pawn Sacrifice, a film about the legendary 1972 match between Fischer and Spassky (starring Tobey Maguire as Fischer and Liev Schreiber as Spassky).

Want to learn how to play chess?  There are dozens of online sites you can visit (and dozens of chess apps for your phone or your tablet).  And there are also numerous local chess clubs you can participate in if you’d like to play the game the way it was intended.

Clemson’s Political Correctness Is Getting Out Of Hand