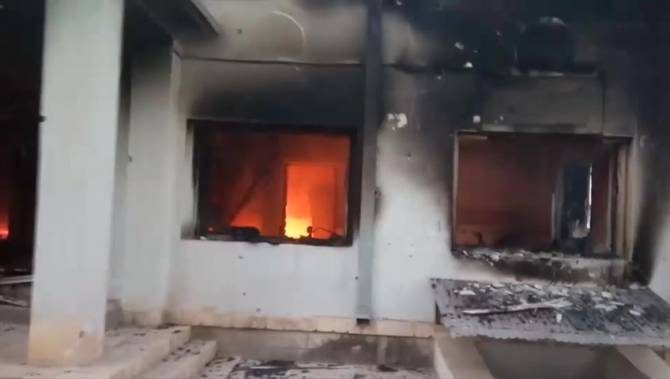 || By RON PAUL  || Following the recent Oregon school shooting, many politicians rushed to the microphones to call for new gun control laws. President Obama even called on gun control supporters to “politicize” the shooting, while some members of Congress worked to establish a special commission on gun violence.

The reaction to the shooting stands in stark contrast to the reaction to the US military’s bombing of an Afghanistan hospital run by the international humanitarian (and Nobel Peace Prize winning) group Doctors Without Borders.

Our Nobel Peace Prize winning president Barack Obama did apologize to his fellow Nobel laureate for the bombing.  However, President Obama has not “politicized” this tragedy by using it to justify ending military involvement in Afghanistan.  No one in Congress is pushing for a special commission to examine the human costs of US militarism, and the mainstream media has largely ignored Doctors Without Borders’ accusation that the bombing constitutes a war crime.

The reason for the different reactions to these two events is that politicians prefer to focus on events they can “politicize” to increase government power.  By contrast, politicians ignore incidents that raise uncomfortable questions about US foreign policy.

If the political and media elites were really interested in preventing future mass shootings, they would repeal the federal “gun-free” schools law, for example.  By letting shooters know that their intended victims are defenseless, the gun-free schools law turns schoolchildren into easy targets.

Even some who oppose gun control are using the shooting to justify expanding federal power instead of trying to repeal unconstitutional laws.  Some opponents of new gun control laws say Congress should expand the federal role in identifying, tracking, and treating those with “mental health problems.”  This ignores the fact that many shooters were using psychotropic drugs prescribed by a mental health professional when they committed the horrible acts.  Furthermore, creating a system to identify and track anyone with a “mental health problem” could deny respect for individuals’ Second Amendment and other rights because they perhaps once sought counseling for depression while going through a divorce or coping with a loved one’s passing.

While our political and media elites are eager to debate how much liberty people must sacrifice for safety, they are desperate to avoid debating the morality of our foreign policy.  To admit that the US military sometimes commits immoral acts is to admit that the US government is not an unalloyed force for good.  Even many proponents of our recent wars support using the US military for “humanitarian” purposes. Thus they are as reluctant as the neoconservatives to question the fundamental goodness of US foreign policy.

Anyone who raises constitutional or moral objections to the US use of drones, bombs, indefinite detention, and torture risks being attacked as anti-American and soft on terrorism.  The smear of “terrorist apologist” is also hurled at those who dare suggest that it is our interventionist foreign policy, not a hatred of freedom, that causes people in other countries to dislike the United States.  Which is a more logical explanation for why someone would resent America — a family member killed in a drone attack launched by the US military or rage over our abundance of liberty?

The disparate reactions to the Oregon school shooting and the Afghanistan hospital bombing shows the political class is unwilling and unable to acknowledge that the US government cannot run the world, run our lives, or run the economy.  Clearly, politicians will never stop expanding government and give us back our lost liberties unless and until the people demand it.

Syria Showdown: Where Is Maverick When We Need Him?