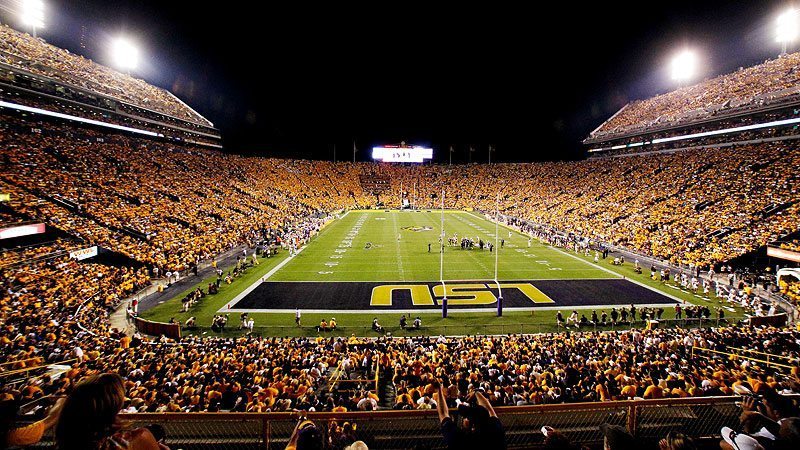 Citing an unwillingness to tie up first responders dealing with the aftermath of “Floodmaggedon,” the University of South Carolina has moved this weekend’s football game against No. 7 Louisiana State University to Baton Rouge, Louisiana.

The news comes less than 48 hours after officials assured fans the game would be played as scheduled in Columbia, S.C.

“We made the extremely difficult decision to cancel classes for the week due to the stress 34,000 students would place on the region’s recovering infrastructure, there is no doubt 85,000 fans would exact the same toll,” University of South Carolina president Harris Pastides said in a statement. “In the spirit of supporting our South Carolina community that is so supportive of Gamecock Nation, we have decided to move the game to Baton Rouge.”

The real reasons behind USC’s decision to move the game?  The city of Columbia, S.C. – where the school’s home stadium is located – is still dealing with contaminated water in the aftermath of the storm as well as a major breach of a canal near its largest wastewater treatment facility.

“Moving the game is best,” Gamecock head coach Steve Spurrier told local television station WIS TV 10 (NBC – Columbia, S.C.). “The governor, our president, law enforcement, they all think this is the right thing to do. We’re just not ready for a ball game Saturday afternoon.”

No matter what the reason for this geographic relocation, the outcome of this game has never really been in question …

LSU and its Heisman Trophy running back Leonard Fournette are expected to run all over the Gamecocks … no matter where they play.  The Tigers (4-0, 2-0 SEC) were a 13.5-point favorite over the Gamecocks (2-3, 0-3 SEC) as the road team – a spread that’s expected to widen now that they will be playing in front of their own fans.

UPDATE: According to the The New Orleans Advocate, “it’s expected that South Carolina will keep the ticket revenue and reimburse LSU for its expenses to conduct the game.”

At least that makes sense.

I think the city really could have used this game, if nothing else as a distraction from the turmoil surrounding us. however i will say that if it has to be an away game, Baton Rouge is probably the ideal spot. The citizens of Louisiana still remember Katrina and should be excellent hosts for the gamecock faithful. Expect to see a lot of support for the gamecocks and south carolina in general.

nice thoughts about the folks there….

Pastides has to change his flight from LA to Baton Rouge

You have won the internet for dumbest thing ever posted!

SC will get the gate and the concessions. It’s actually the best alternative among a slew of imperfect options.

Thousands of people across South Carolina drive up to Clemson for football games. Do we really need more people driving around the state?

Who cares what is said in the New Orleans Advocate. As soon as LSU announced the home game and was able to get firm commitments on ticket sales, (and then generates revenue) it will be lawfully obligated to “mitigate” its damages and, therefore, money will be available to reimburse Williams-Brice ticket holders.

Quit “stirring the pot” with this nonsense, Will.

Unfortunately, Will can’t report the facts/truth without resorting to cheap sensationalism, racism or outright lies and distortions.

Et tu Mandingo? Captain Renault is shocked at your allegation about Folks.

Captain Renault is shocked that you would accuse Folks of stirring the pot.

Damn, y’all need to ban your idiot kicker from Twitter. He just got owned by Nancy O’Dell.

I’m Tiger (Clemson) fan and believe that Death Valley (at Frank Howard Feild) is the closest place to heaven on this earth. I’ve felt that all the others are copycats.

When I heard that the LSU Tigers would be hosting the Gamecocks at Death Valley in Baton Rouge, and would be giving the guest a home feild atmosphere; That the LSU band will be learning the South Carolina alma mater (Latin for nourishing mother) and fight songs; I admit I got misty eyed. This is truly a wonderfully thoughtful gesture. I will never think about LSU the same.

It’s heartening to see when folks can rise above their hum-drum attitudes…. the attending Carolina fans will appreciate the welcome —- and they and the team will share their feelings when they return …… this could be the game of the week!

Let’s see now—the Gamecocks?…right—let’s move it to the
Baton Rouge Cemetery since the ‘Cocks are already dead !!!

Is Clemson still playing at home this weekend? Would the Law Enforcement and EMS resources needed for this event be better spent dealing with the flooding and flood victims in other parts of the State?

Hey Mr Kicker, How was your trip to “The Real Death Valley”?