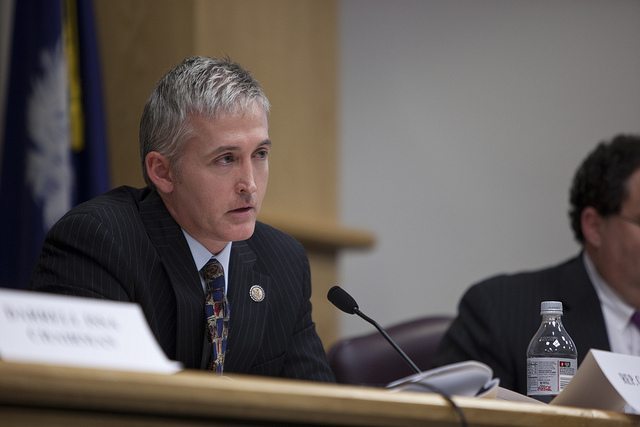 LAWMAKER WANTS TO KEEP HIS FOCUS ON INVESTIGATION OF HILLARY CLINTON

|| By FITSNEWS || Looks like all that speculation about U.S. Rep. Trey Gowdy becoming a contender for the next “majority” leader of the U.S. House of Representatives was just that … speculation.

Gowdy isn’t interested, according to his closest congressional confidante.

“There’s been a lot of chatter today about Trey Gowdy running for Majority Leader,” Gowdy’s colleague Mick Mulvaney wrote on his Facebook page.  “I just talked to Trey for 20 minutes. He made it clear to me, in no uncertain terms, that upon further reflection last night and tonight, he is OUT of any consideration for any leadership position. He wants to focus on his work on the Benghazi commission. While I think he would have been a great majority leader, I absolutely respect this decision. He isn’t the kind of guy to leave a case midstream, and it makes complete sense to me that he has decided to stay and continue his work on Benghazi.”

Earlier in the day, Gowdy received several endorsements for the post – and Mulvaney indicated he would make an excellent compromise candidate.

The US Congress Must Radically Reinvent Itself … Or Else