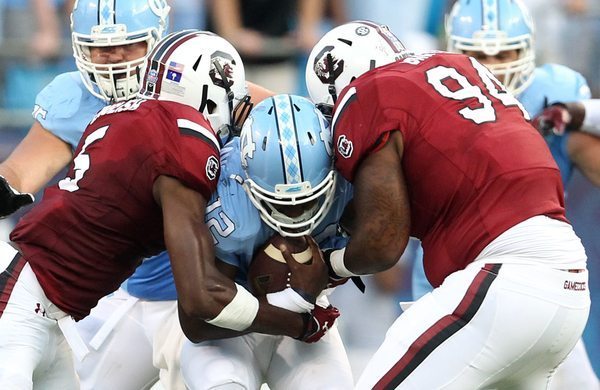 || By FITSNEWS || In what was billed as a battle of high-octane offenses, the University of South Carolina football program managed to survive a defensive struggle against a middle-of-the-pack Atlantic Coast Conference squad.

Head coach Steve Spurrier‘s Gamecocks (1-0, 0-0 SEC) outlasted the University of North Carolina 17-13 in Charlotte, N.C. on Thursday night – a shaky season opener for a pair of teams looking to rebound from disappointing 2014 campaigns.

Still, it was a depressing effort for Spurrier’s offense – which put up big numbers a year ago only to be sabotaged by a porous defense.

This year’s defense looks pretty porous, too … relying on mistakes by North Carolina quarterback Marquise Williams to steal a win in this rekindled rivalry. 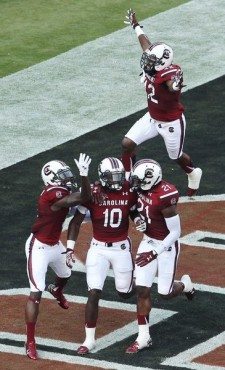 It wasn’t pretty though …

Despite putting up only 13 points, the Tar Heels (0-1, 0-0 ACC) wound up exceeding their average per game yardage from a year ago – amassing 440 yards against a unit led by the much-maligned Lorenzo Ward and his new co-coordinator, former Chicago Bears’ defensive coach Jon Hoke.

Where do the Gamecocks go from here?  Well, we can tell you where they won’t be going: The Top 25, where Spurrier’s program was a fixture from 2010-13.

Spurrier and Co. will have nine days to work out the kinks before opening Southeastern Conference (SEC) play at home on September 12 against the University of Kentucky – one of the three teams which stole wins from South Carolina a year ago.

After that, the Gamecocks go on the road against ninth-ranked Georgia on September 19 before returning home to play unranked Central Florida on September 26.