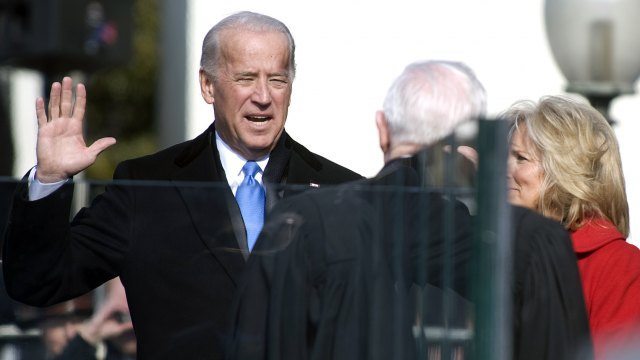 || By FITSNEWS || A movement hoping to get U.S. vice president Joe Biden to jump into the Democratic presidential contest is picking up steam …

The “Ridin’ with Biden” organization rolled out a list of South Carolina supporters this week – including support staff to help work the media and grassroots.  Leading the effort?  S.C. Senator Gerald Malloy and former state superintendent of education Inez Tenenbaum.

“Over the last few weeks, I have been hearing from folks in my Senate District and throughout the state and the message is clear: South Carolina wants Vice President Biden to not only run for President, but to be the next President of the United States,” Malloy said.  “South Carolina is ready to lead the effort to Draft Biden.”

Tenenbaum said Biden “would make South Carolina Democrats proud as the next Democratic nominee and ultimately the next President of the United States.”

In other words “Ridin’ with Biden” is an actual thing … not just a press release from a couple of politicians.

Will the effort work?

It’s Gonna Be A Long Season

“Al Gore For President” Rumors Ramp Back Up

Biden man, Binden man, beatin’ Trump, you know he can, been around, a million years, cracks you up, brings you to tears,

Well when you play against the little league team, usually one really good player is plenty.

A criminal, a brain injured, racist, plagarizer/pervert and a communist would make a nice team in a 3rd world banana republic like you are familiar with, NOT in America.

Call one of the Kardashians.

Well a C- minus student from Yale and a lying sack of turd from the Nixon administration was good enough for you in 2000 and 2004. Or have you forgotten.

Some tourists in the Museum of Natural History
are marveling at some dinosaur bones. One of them asks the man in a suit standing nearby. “Excuse us, please, but do you work here and can you tell us how old the dinosaur bones are?”

The man replies, “No, I am Vice-President
Joe Biden, and I don’t work here, but I do know their age. They are 3 million, forty-one years, eight months, and two days old.”

“That’s an awfully exact number,” says the tourist. “How do you know their age so precisely?”

VP Biden answers, “Well, the dinosaur bones were three million years old when I came to Washington and started working in the Congress, and that was forty-one years, eight months, and two days ago.”

Nice one. Now, if I run into Grand Tango at the grocery store and ask how old the eggs are what will the answer be?

Just don’t ask him about potatoes….

FITSNews got em a Knight on a White Horse.

You are some humorous Mofos….

Bottom line: If you cannot find a black candidate to bring out the Multi-Voters (and there are voter integrity laws now, too) you in a HEAP a Trouble.

Sucks to be you, especially after Obama has screwed up our country…

Crap off your legs? Again with the fecal fixation. Do you crap your pants?

That’s GT right there…notice he slipped up with the capital “T” in trouble, and the capital K and M?

You nailed the fecal reference…just missing a little dick sucking and he’s back to old form.

The federal government has tricked the American people for years by falsely using the 12 million number as a head-count of how many illegal aliens are illegally in our beloved nation. Some estimates are saying as high as 35 or 40 million illegal aliens are hiding in America, that is somewhere around 10%+ of our population.

Not to mention the babies having been spawned by illegal aliens, called anchor babies. These millions upon millions of anchor babies have been falsely given citizenship as the result of a twisted interpretation of the 14th amendment. We must fight this judicial perversion with all that we’ve got!

“falsely givevn citizenship” you are so freakin’ funny. They obtained their citizenship the same way your Mom did – they came from between the legs of an immigrant. Ya-zoooo!!!!! That’s the law dude. As Donaldo says – “We are a nation of laws.” Don’t like it – get it changed – else shut up. I’m guess though you’ll do neither – just complain it ain’t fair to nativist whitey and do nothin’ about it.

Biden is destined to get into this race, Hillary is dying, Sanders should be running for the Mayor of Moscow, and the rest of the Democrat candidates could not find their ass with both hands.
All we need now, is for the Press to get on board, Where is Chris Matthews, will he get “a thrill up his leg?” Guess that will only happen when he sees Biden swimming nude in front of female Secret Service officers.
Will David Brooks make a proclamation that Biden would make a good President after he sees the cease in pants?
If we start hearing those kind of pronouncements, we can assume that Hillary’s chances for the nomination are on a downward swirl in the nearest crapper.
Hillary(Don’t forget to wipe)

erneba what a guy and such a gentleman, It’s a shame your old lady forgot to swallow.

The sheer number and extent of Biden’s fibs, distortions, and plagiarisms struck many observers at the time as worrisome, to say the least. While a media feeding frenzy (a term popularized in the 1988 campaign) always creates an unseemly air of hysteria, Biden deserved the scrutiny he received. Quitting the race was the right thing to do.

Twenty-one years on, how much should Biden’s past behavior matter? In and of itself, the plagiarism episode shouldn’t automatically disqualify Biden from regaining favor and credibility, especially if in the intervening two decades he’s not done more of the same, as seems to be the case. But no one has looked into it. The press should give his record since 1988 a thorough vetting. It’s worth knowing whether the odds-on favorite to be our next vice president has truly reformed himself of behavior that can often be the mark of a deeply troubled soul.

Not an issue. Look at Trump – he’s a lying sack of shit and no-one cares.

Honesty, like Patriotism, is not a requirement to be a Democrat.
Look at the Clinton’s, they have made a mockery of telling the truth.

Malloy better watch out. Loftis is after him now RSIC hired his kid. Watch out for skeletons.

Thrilled as if we heard Obama had gone back to Kenya and
that the “cripple” IS—Killiary !!!

they hired a real losing team. isaiah nelson and morgan allison were terrible leaders who achieved nothing during their tenure with scdp in 2014. godspeed to this losing crew.