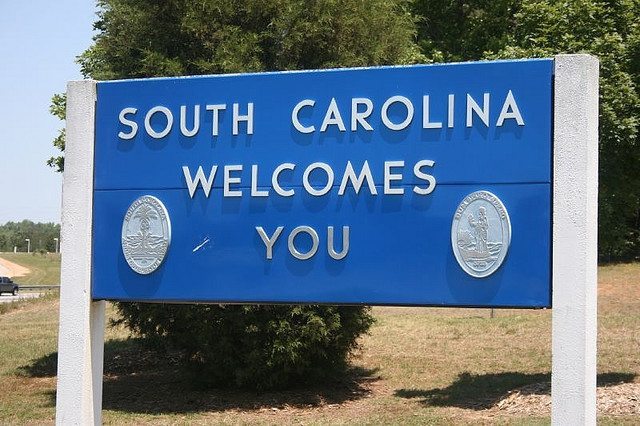 || By FITSNEWS ||  Two days before his latest visit to South Carolina, another poll is showing GOP presidential frontrunner Donald Trump with a commanding lead in the Palmetto State’s “First in the South” presidential primary.

According to a new Monmouth University survey (.pdf here), Trump is the first choice of 30 percent of likely “Republican” primary voters in the Palmetto State – giving him a 2-to-1 advantage over retired neurosurgeon Ben Carson, who is supported by 15 percent of likely primary-goers.

“Political experience is not a particularly valuable commodity this primary season,” Monmouth’s pollsters said, noting that 61 percent of respondents want “a president from outside of government who can bring a new approach to Washington” as opposed to only 28 percent who prefer “someone with government experience who knows how to get things done.”

Those voters overwhelmingly prefer “The Donald” – results consistent with other recent “First in the South” polling.

That’s quite a cross-section of ideological support …

Prior to Trump’s meteoric rise, Bush and Walker were the early South Carolina frontrunners …

U.S. Senator Lindsey Graham of South Carolina also drew four percent in the survey, another embarrassing showing in his own backyard.

“It’s interesting that Ben Carson, whose parents come from neighboring Georgia, is outpolling the state’s own senator as a second choice,” Monmouth’s pollsters noted.

Meanwhile Ohio governor John Kasich, former Arkansas governor Mike Huckabee and U.S. Senator Rand Paul of Kentucky each drew three percent support.  None of the other six candidates in the race eclipsed the two percent threshold, while 11 percent of respondents said they were undecided.

For those of you keeping score at home, Monmouth surveyed 453 likely GOP primary voters from August 20-23 via telephone.  Its poll has a margin of error of plus or minus 4.6 percentage points.

Well, since you asked, here’s an interesting take on it from our friends at Market Research Foundation (MRF).

That breakdown could shift even further in favor of the outsiders in the event the economy goes (further) south.

“As global economic headwinds intensify – further straining America’s already less-than-robust consumer ‘recovery’ – will the outsiders reap additional electoral benefits?  Or can any of the conventional candidates find a way to tap into the prevailing angst?” its analysts wondered.

Good questions … in fact the answers to those questions will likely to determine the eventual GOP nominee.

It was said that the Bush presidency brought on Obama. Is this early Trump supremacy thanks to the Marxist in Chief?

It shows that Americans of all flavors are fed up with politics as usual. And lying politicians. Someone from the business world that can get things done is a welcome change from promises that are never followed up on. Trump is answering a need from the everyday people that it is time for a change.

if you think the business world isn’t political then you are fooling yourself.
Heck Trump was cozied up with the Clintons just a few years ago. Donated to their foundation. He is an immature, selfish, opportunist. Great for a business, probably not so great for the White House.

These suckers will vote for any dumb clod that shouts enough dog whistles!

Or shits a few dog whistles.

All right. Let’s get out the liquid lightenin’ and spike the punch. Can’t wait for the Twitter feeds next time he’s liquored up. “@Haley is a horrible woman. I hear she’s a swinger while her state is overrun with illegals and doles out money to China. Disgracefull – The Donald”

I told ya Trump doesn’t drink.I can’t believe you are repeating that.

I kinda feel for ya, you need to change with the times. It was good then, I miss it too.

What this poll tells us is that support for the immigrants in chief (Piyush “Bobby” Jindal, Raphael “Ted” Cruz, and Marco Antonio Rubio), and Koch puppets, Walker and Fiorina is collapsing fast. Americans want an American President. Not someone with roots in the third world. And they don’t want a puppet under the thumb of Koch.

Hey be careful, our Governor, Nimrata Nikki Randhawa Haley, is and anchor baby.

Nice try Bernie, but Donald works for me!

Everyone Was Laughing and High-Fiving: The Presidency of Donald Trump

(Says the man having a delusion)

Senator Bluster informs his staff that he is going to train his memory. “I don’t know what system to use, but I’m looking for one that will enable me, when I am interviewed, to remember what to forget.”

????????????????????????????????????? my mate’s mother makes $81/hour on the web…….on weekday I nontransmissible a high of thedistinction McLaren F1 once I been earnin ten953$ this most recent 4weeks and inway more than 10 miss month . motivation behind truth sometimes|this can be} as a rule routinely the essential financialy satisfying i even have ever done . i began this 9-months past and basically progressively began securing really seventy seven$… p/h . More on the article– >………

Dear Megyn,
I don’t know what go into me last night. I think, really, I was hurt that you did not invite me on your vacation. As you know, I’m hugely wealthy, hugely. But in the end, money isn’t the end all be all. I seek love, affection. And I find you highly attractive. I think that’s why I went so bonkers after the debate. What I really wanted to tell you was that I think you’re beautiful, and I love you. I want to be closer to you (descreetly of course so our spouses don’t find out). But I’ve always struggled with talking to “the ladies.” That’s why I’ve always chosen Eastern European women, they usually don’t speak English and it’s much easier. But you’re the true prize. Megyn, come with me to Aruba. I’m building a new hotel there, and will give you your own suite – call it a suite for the sweet. I’ll bath you in champagne, feed you cavier on little crackers and later, after the election, I’ll tweet to the world about our love. – Donny

The red joker is trump.