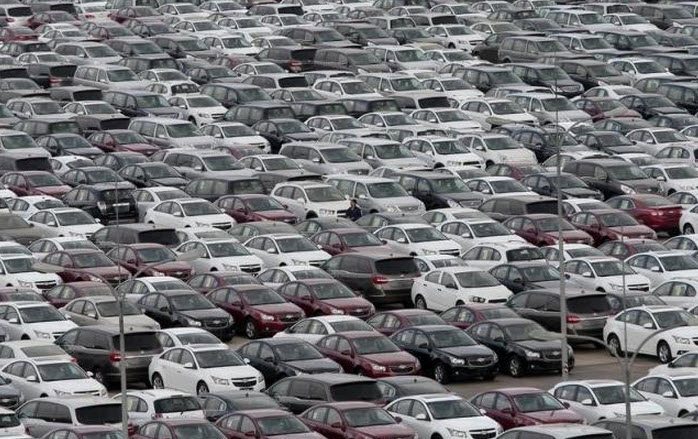 || By FITSNEWS || How does the Chinese economic slowdown affect you?

That’s because the Chinese car market – which GM and other U.S. carmakers are relying on to sustain their growth projections – is tanking.

“China’s import car dealers saw inventory days reach a mind-blowing 143 days in May. For context, the normal average has been 24-36 days,” the website Zero Hedge reported this week.

That follow’s last Friday’s report in The Wall Street Journal indicating June passenger car sales fell 3.4 percent – only the third monthly decline in three years (and the other two were the result of a weeklong holiday and a political crisis).

“Auto executives had been forecasting 2015 sales in China to slow to a high, single-digit percentage gain over 2014, but that now looks optimistic,” the Journal‘s John D. Stoll noted.

Indeed it does.  In fact the China Association of Automobile Manufacturers has slashed its 2015 growth projections from 7 percent to 3 percent – with further downward revisions possible.

What will Detroit do?

Probably nothing.  After all they can just pass the bill onto you in the event their Chinese sales projections continue to implode.

As bad as things are in China, though, life is still good for Hangzhou billionaire Li Shufu – who is getting a massive incentive deal from the taxpayers of South Carolina to locate his newest Volvo manufacturing facility in the Palmetto State.

In fact Shufu’s plant will get a $70 million interchange (at a time when S.C. lawmakers are clamoring for a gas tax hike to “fix our roads”).

Fixed it for you, leaving out that middle segment of ramming it up my ass just didn’t sit right

Aren’t you gonna thank me for posting your bail,and the loving?

At this rate, Chinese owned Volvo could simply cancel construction in SC.

4,000 South Carolinians will make 50K a year, and you liberals can’t do anything but bitch because Haley kicked your asses, to lure jobs here.

You are some miserable, hate-filled motherfuckers. You’re too fucking lazy to work, and you hate if other people want to provide for their families.

Hey chump, how’s life in the trailer park? Gonna go back to “working” on your blog?

These images from China are so damn creepy in a beautiful way.China’s not good with city-planning
http://io9.com/chinas-brand-new-abandoned-cities-could-be-dystopian-m-1238731420

Shut up fat Americans! Shuuuutttt up! You eat too many Combination #5’s.

A wittle secret: The slop you call “Chinese” food here isn’t what we eat, or we’d be fat like you!

I bwing jobs! You know nothing blue eyed devils. I own your politicians!

We don’t want your shitty cars anyway. You buy Volvo!

clever..! wish I could have thought that one up…

Asians will gut a fish, throw away the fish and eat the guts. I’d be skinny too.

Screw GM. I have bought my last piece of crap from them.

if you’ve got a Corvette with less than 5,000 miles on it I’ll gladly take that “piece of crap” off your hands for pennies on the dollar since it is such a shitty car……………..

If you’re lucky, you might get another 5,000 on it before the ignition switch fucks up and you hit opposing traffic at 70 MPH.

What will Detroit do?

Probably nothing.  After all they can just pass the bill onto you in the event their Chinese sales projections continue to implode.

For a businessman Will doesn’t seem to know much about economics. An over supply of cars means lower prices inorder to reduce the glut.
I wonder if Ron Paul doesn’t send Will a check he can just bill Trump double. Is that how business works? Haven’t heard from Howard Rich lately, I guess I’ll have to stick it to the Koch brothers.

I wrote a few days ago, concerned about the Chinese stock market. If you remember, I wasn’t concerned so much with its value as much with the Chinese government’s interference in the market.
1. In a healthy market, stocks are vulued based on the company’s underlying value and future prospects. It’s not gambling because one stockholder’s gain doesn’t depend one someone else losing.
2. When there’s a bubble and investor ethusiasm does not reflect fundamentals, the market is like gambling or a pyramid sceme. If you get out in time you win, but those who buy the stocks they sell lose big when the bubble burst. Who wins and loses depends on when the bubble burst.
3. What China is doing is worse than the crash when the bubble burst. Instead the market desending into risky gambling, it has become a fixed gamble where certain players are guaranteed to win and others are guaranteed to lose. The market is swinging wildly and stockholders know that if the market fall to much that the government will rescue it. So stockholders can buy into a dip knowing the government will purchase or force brokerages and banks to buy. Then when the market rises the other stockholder’s sell starting another crashed providing another guaranteed buying opportunity because they know the government will not let it chase below a certain point.

This manipulation completely corrupts the market and can bankrupt financial institutions involved in the rescue.

It may not be too late for China to get out of the way and let the market crash by 50% or more. Finally, the issue of political stability is too hard to predict. I think there could be protest but the government successfully cracks down.

That bubble of investor enthusiasm has popped … The richer Chinese will be buying Silver, Gold and other commodities. They have seen Chi-Comm Central Planning fiascos before.

The EuroTrash markets are next, then our own markets.

The richer Chinese will be buying Silver, Gold and other commodities.

Yes, but they will also will be buying dollars and US Treasuries.

I believe Rom Paul has endorsed a US currency pegged to Gold, Silver and Commodities … As Alan Greenspan did throughout His tenure as Head of Fed.

Will, you have gotten real good at Control C Control V. This time from zerohedge. Of course this was last week’s news.