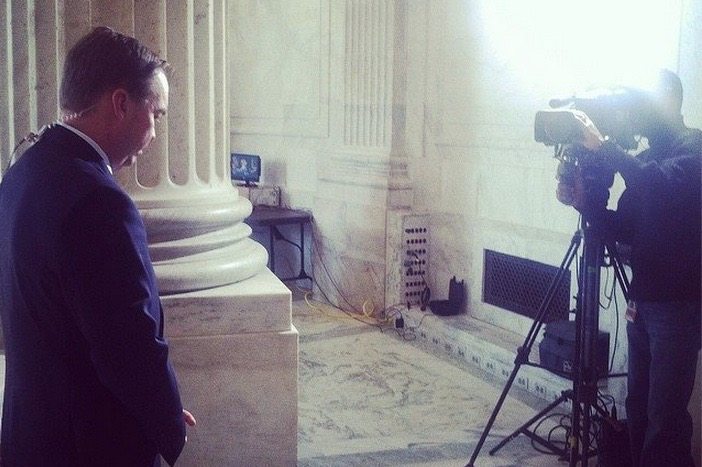 AND WHY IT MATTERS …

|| By FITSNEWS || In politics, if you’re explaining … you’re losing.

When votes or policy positions don’t speak for themselves, statements need to be crisp, compelling and laced with facts – preferably facts which are demonstrably true (or difficult to argue against).

U.S. Rep. Mick Mulvaney, however, has decided to go the Mark Sanford route.

Earlier this week, Mulvaney released a 648-word statement in which he said he was “disappointed” by an untimely and “divisive” debate about the Confederate flag, the symbol embraced by 21-year-old white supremacist Dylann Storm Roof in connection with his murderous rampage in Charleston, S.C. last week.

I will admit that I have not been as quick to call for the removal of the Confederate Flag from the State House grounds as some others. I remember that the flag is where it is as the result of something that is becoming all too rare in politics: compromise. Indeed, moving the flag from the dome to the grounds in 2000 – and the concomitant establishment of the African-American monument – could be considered as a high point in South Carolina politics: a time when people got together and worked through their differences in a way that all could accept with pride.

And my initial reaction to calls to summarily remove the flag was that such an action would be tantamount to admitting what is not true for many South Carolinians: that the flag is a symbol of hate. Yes, it was for Dylann Roof. In fact, for him it was something even more evil than just hate. But we typically do not allow such people to define what our symbols mean.

Mulvaney ultimately got around to something resembling a position, though …

But in speaking with many people over the course of the last few days, it has become clear that the flag does in fact mean different things to different people in our state. And I blame myself for not listening closely enough to people who see the flag differently than I do. It is a poor reflection on me that it took the violent death of my former desk mate in the SC Senate, and eight others of the best the Charleston community had to offer, to open my eyes to that. And because of those very different — and very valid — impressions of what the flag represented, I admit that the flag has become a distraction: something that prevents us from talking about all that is good about South Carolina. It strikes me as particularly disappointing, for example, that we have spent more time talking about the flag for the last few days than we have talking about the extraordinary display of faith, love, and forgiveness shown by the families of the victims of the shooting in Charleston. If the flag has become an excuse for people to ignore things like that, then perhaps time has come for a change.

Perhaps those who are now trying to focus attention on the flag are spending their time on the wrong things.

Why the waffling?  Well, Mulvaney represents the fifth congressional district – where polls show support for the flag is much higher than in other regions of the state.

Complicating Mulvaney’s conflicted stance on the flag?  His top political operative is one of the 170 people who will actually vote on its future.

In fact that operative – Eric Bedingfield – was one of ten lawmakers who bucked the trend and voted not to bring the flag’s removal up during an extended summer session of the S.C. General Assembly.

Bedingfield told The Washington Post his vote was “in no way reflective on whether or not I think the flag should be removed. I simply wanted to take this up in regular order, vet different proposals, hear from differing perspectives and attempt to craft a solution that best fits the people we represent.”

Mulvaney distanced himself from Bedingfield’s vote.

“I don’t tell the folks who work with me how to think,” he told the Post.

Why does the national media care what the operative of a congressman thinks about the flag?

Well, Mulvaney and Bedingfield are the tip of the spear for U.S. Senator Rand Paul‘s 2016 presidential campaign in early-voting South Carolina.

And according to the Post Mulvaney is a man on the move in Washington, D.C. – which as we noted in this column may not be a good thing.

He’s also one of the leading contenders for the 2018 “Republican” gubernatorial nomination in South Carolina.

“Mulvaney, is a rising Republican star in South Carolina who swept into office during the 2010 tea party wave and represents one of the more conservative parts of the state,” the paper reported.  “Mulvaney is talked about as a future statewide candidate, perhaps for governor in 2018 when (Nikki) Haley will be term-limited.”

So … how does all of this impact Mulvaney’s future political aspirations?  That remains to be seen … but it’s safe to say he didn’t exactly distinguish himself in responding.

In these situations, positions must be taken clearly, unambiguously.  And in lieu of taking the “right” position, politicians should adhere to the maxim of Bill Clinton – who once famously said that “when people feel uncertain, they’d rather have somebody that’s strong and wrong than somebody who’s weak and right.”