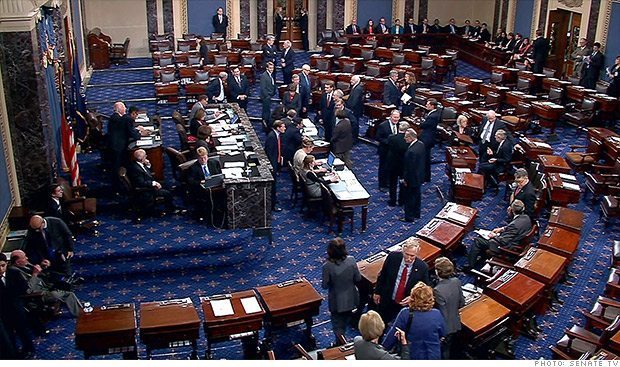 || By ROBERT ROMANO || Fast track trade authority may have passed the House, but it’s not over yet.

The legislation — which grants power to President Barack Obama to negotiate the Trans-Pacific Partnership — still must pass the Senate, where a cloture vote is expected Tuesday.

And Senate Democrats remain committed to including a provision that was stripped out of the House version of the legislation: $2.7 billion of trade adjustment assistance, a bailout to labor union members purportedly dislocated by the Trans-Pacific Partnership.

“Pro-trade Democrats feel very strongly about making sure that both get done,” said Sen. Ron Wyden (D-Ore.), a key voice on the Senate side for Democrats hours before the House vote.

When trade authority came to the Senate floor last month without trade adjustment assistance, Democrats filibustered it. In order to get it passed, Senate Republicans relented and allowed it to be included.

Meaning, we are pretty much back where we started. So far, you can’t pass a bill in the House with trade adjustment assistance in it, and you can’t pass one in the Senate without it.

To get fast track, then, one of two things will have to happen. Either House Republicans will cave and vote for trade adjustment assistance — a possibility since a motion on the issue remains on the House floor until July 30 — or Senate Democrats will have to cave and give up on it.

All of which makes the legislative wrangling to occur in the coming days quite important.

Further complicating matters, the entry of Donald Trump — an ardent opponent of fast track — into the Republican presidential race could put more pressure on Republicans like Sen. Ted Cruz (R-Texas) and Sen. Marco Rubio (R-Fla.) to move against the legislation.

But first things first. Since the ball is now in the Senate’s court, the question will first be put to Senate Democrats whether they can support trade authority going to Obama’s desk without trade adjustment assistance included.

If they are, then this is a done deal.

If not, then it’s back to square one. Stay tuned.