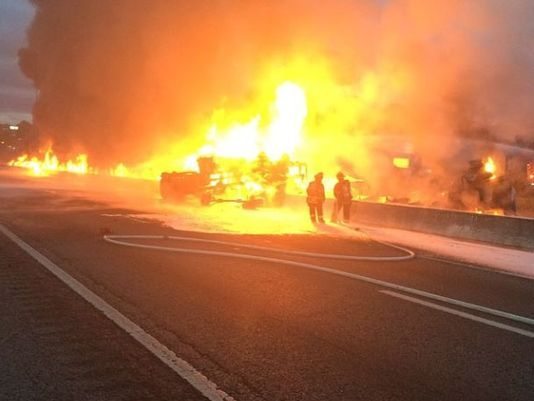 || By FITSNEWS || It’s been a bad week for motorists in the Palmetto State … and we’re not just talking about ongoing efforts to raise their taxes (by any means necessary).

A pair of wrecks in Charleston and Columbia this week caused major disruptions in traffic – although thankfully no lives appear to have been lost in either accident.

The first accident took place Tuesday on the Arthur Ravenel, Jr. bridge – which carries U.S. Highway 17 over the Cooper River between Charleston and Mount Pleasant, S.C.  What happened?  A woman attempting to change lanes slammed into a tanker truck on the bridge around 11:00 a.m. EDT – causing a nine-hour shutdown of the landmark structure.

Meanwhile early Wednesday morning just outside of Columbia, S.C., another tractor trailer carrying 8,500 gallons of fuel was involved in a ten-car pileup on a heavily-trafficked Interstate at around 5:30 a.m. EDT.

That wreck – which occurred in the eastbound lanes of Interstate 26 a few miles northwest of the state capital – shut down one of the state’s busiest transportation arteries for several hours.  Fire from the wreck was so intense it spilled over into the westbound lanes – badly damaging the roadway.

Seven hours after the crash, the westbound lanes were finally reopened – although the eastbound lanes remained closed.

The cause of that accident remains under investigation …

Another Wreck Shuts Down SC Interstate