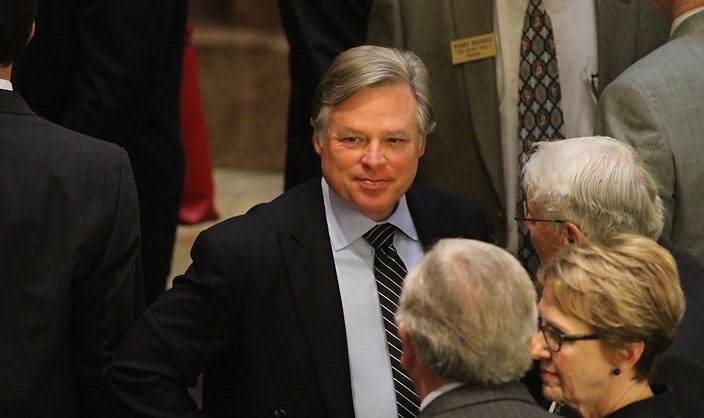 LARRY MARCHANT IS BACK!

|| By FITSNEWS ||  At the time he acknowledged having an extramarital affair with then-S.C. Rep. Nikki Haley, lobbyist Larry Marchant was at the top of his game.  His influence at the S.C. State House was unrivaled, his was business booming and his future was … as singer Tom Petty once crooned … “wide open.”

He’d even added a political consulting wing to his firm – and seemed on the verge of building an empire to rival that of veteran South Carolina kingmaker Richard Quinn.

But the Haley allegation – details of which were pretty easy to confirm – backfired on him.  Badly.  Haley made him pay – exploiting a network of Palmetto political operatives eager to repay Marchant for one-upping them in the lobby.

“She took him out,” one of Marchant’s rivals in the State House lobby told FITS.  “And you know what?  That sumbitch had it coming.”

In fact by the time Haley was referenced as the “other woman” in Marchant’s 2013 divorce, it no longer mattered that he had been telling the truth all along.  “Teflon Trikki” was cruising to reelection, while Marchant had become the definition of a cautionary tale in Palmetto politics.

All while his family life crumbled around him …

“Shortly after the primary in 2010, I learned who my true friends really were,” Marchant told FITS. “I admit I spent too much time wondering why several people had abandoned me, most of who knew about my announcement prior (to it happening).”

But Marchant wasn’t spiraling out of control – as many suspected.  There were no Don Draper-esque “what does it all mean?” binges of alcohol-soaked regret and drug-addled excess.

“I knew I was done in the lobby and quite frankly I was fine with that,” Marchant continued. “While it was financially rewarding, I was tired and no longer had a good feeling about the political atmosphere at the State House. While many thought I had gone down in flames, this period actually allowed me to reassess my life and to reboot into doing something that I could once again feel passionate about.”

His new passion?  The law …

Since his 2010 “flameout,” Marchant has gotten his law degree and passed the South Carolina bar exam – becoming the Palmetto State’s newest and, we would argue, most dangerous attorney.

If he was hungry the first time he built a company from the ground up (as a scrappy ex-staffer from the office of former governor Carroll A. Campbell, Jr.), Marchant is insatiable this go-round.

“Being sworn into the bar made me feel reborn,” he said.

Marchant tells FITS he doesn’t hold a grudge against Haley for trying to take him out.  Nor did he partake of any schadenfreude when the governor and BCBSSC took it on the chin earlier this year.

He’s not trying to settle scores, he’s focused on building his new business and gaining courtroom experience – taking on cases and clients he enjoys.  In fact you may be reading about one such case sooner rather than later …

Bottom line?  Larry Marchant is back … with nothing to fear, nothing to lose and everything to prove.

Not to you, either … to himself.