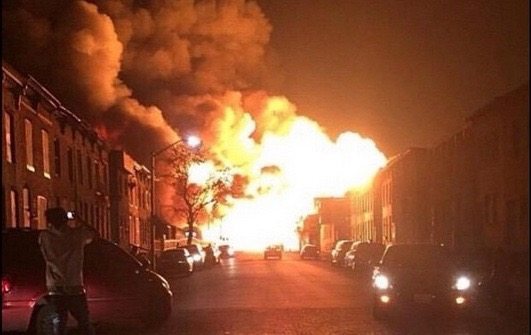 VIOLENCE IS BEING PERPETRATED BY JUVENILES, THEY SAY …

|| By FITSNEWS ||  Baltimore’s gang leaders are refuting claims that they have united in an effort to kill white police officers.  In fact they say they’ve been trying to stop the violence that has engulfed the city in the aftermath of the funeral of Freddie Gray – a 25-year-old black man who sustained a fatal spinal injury while in police custody earlier this month.

“The Criminal Intelligence Unit received credible information that members of various gangs including the Black Guerilla Family, Bloods, and Crips have entered into a partnership to ‘take out’ law enforcement officers,” Baltimore police said in a statement.

“We want to tell the people of the city right now, of Baltimore City, that the image that they’re trying to portray of the gangs in Baltimore — The BGF, The Bloods, The Crips — we did not make that truce to harm cops,” a gang member told WBAL TV 11 (NBC – Baltimore).

“We did not come together against the cops,” he continued. “We’re not about to allow you all to paint this picture of us.  We got soldiers out here right now that are dirty – we dirty.  They threw bombs at us to try and stop what’s going on right now.  You all are not about to do that to us.”

What’s not immediately clear is whether the gangs are actively trying to stop violence against police officers – or merely seeking to halt the senseless destruction of property in black neighborhoods.

“It’s really bad,” one Baltimore resident told FITS.  “It’s juveniles right now causing this mess.  It’s ridiculous. They don’t remember what that area was like when there wasn’t a CVS or (a) mall … the community worked hard to get that.”

“It’s really bad when the gangs are calling for (the violence) to stop,” the resident added.  “They know what it was like when that area was completely impoverished.”

The resident added that violence is bad for gang business every bit as it is bad for above-board business.

“They can’t deal their drugs and whatever else they do in the midst of chaos and violence,” the resident said.  “This is putting a serious damper on their business.”

Many blacks believe Gray was injured – and denied prompt access to medical attention – during what’s known as a “rough ride.”  That’s the term given when police deliberately drive vans transporting prisoners in a rough and reckless manner so as to cause the prisoners injury.

According to The Baltimore Sun, a pair of suspects won lawsuits after being paralyzed during prior “rough rides.”

Six Baltimore police officers have been suspended in the aftermath of Gray’s death, while multiple investigations into the incident are ongoing.

There was also no excuse for the response of Baltimore’s mayor – Stephanie Rawlings-Blake – who basically permitted the destruction of dozens of businesses, cars and homes.  Not to mention numerous assaults on innocent white bystanders.

“We also gave those who wish to destroy space to do that,” she said.

On the orders of Maryland governor Larry Hogan, several hundred National Guard troops have been dispatched to Baltimore – along with local law enforcement officers from surrounding areas.

“It’s not going to happen again,” Hogan said of the violence.

In Other Myrtle Beach News …

Let em burn it to the ground. These type folks need to be in a Jungle,they are sub Human.

That may be true, but you cannot say that. Please forward me your name and address.

Ever been to NW Balt’more? It ain’t no Eden.

“…We want to tell the people of the city right now, of Baltimore City, that the image that they’re trying to portray of the gangs in Baltimore — The BGF, The Bloods, The Crips — we did not make that truce to harm cops,” a gang member told WBAL TV 11 (NBC – Baltimore)…”

Yeah cause any time we want to know what gangs are up to, we’ll listen to their ‘pressers’ and beliebe what the tell us…

Well, actually, if I was making my living selling crack on corners, and herion on door steps, having 5,000 National Guard troops and 8,000 cops all up in my face wouldn’t exactly help my business. And if scares away the white kids from driving in to buy, I’m hurting. So yeah, they probably don’t want the trouble. But once it dies down, and all the whites from Frederick and Towson drive in to lookie – lou – sales will be back up. Only now they’ll have to walk over a few neighborhoods to get that six pack.

Whites in Baltimore? Haven’t seen one yet.

And 90% of that 30% likely live within a block or two of not living in Baltimore.

10,000 people are peacefully protesting, but the media only wants to focus on the few trouble makers and arrests.

Where are these 10,000 people peacefully protesting?

Come on guy, that photo was from a peaceful protest last week/weekend, NOT from the melee yesterday. I watched the news helicopter footage yesterday, there were thousands of feral “children” running around acting lawlessly. Who know who incited them, but it clearly wasn’t a “few”. You’re just trying to control the narrative. Stop.

The other part he’s missing is that the violence spilled out of that ‘peaceful protest’ though Roger is correct that they were peaceful – until they weren’t.

Hey. It happened in Bhengazi. It can happen in Baltimore.

Where’s the link to that footage? I’d love to see these “thousands.”

It was streaming live yesterday and one through the night. You clearly want to have a one sided conversation if you’re going to sit here and deny that it happened.

Hey, just saying I didn’t see it. Maybe I should have stayed glue to to the tv?

I watched one pack of wild “children” walking down the street by a new construction site, where guys were simply there trying to make a living. One little shitstick picked up a brick and threw it at a construction worker. That’s justice for Freddie?

Dude, I never stated there wasn’t ANY violence, just over reporting of it. Goddamn…

No, you said there were a “few” troublemakers that broke out of an otherwise peaceful protest yesterday. Your assertion is complete bullshit. There was an organized “purge”, do I need to explain to you what that means?

Hey, jackoff. My point was that we’re not getting the whole story from major media outlets. Maybe you and GT want nothing better to do than argue bullshit all day.

He would be doing a better job than you of hiding it.

Riot police are lining as new protests are starting NOW. Tell Roger to have the Warden turn the tv on so he can catch up.

The reality is, there were some activistd trying to keep people from looting, burning, killing and otherwise being thuggish dicks. That was the real minority, though. They were ignored, and shoved aside. There were throngs of people, just destroying everything in their path. Anarchy is not protest. Unless it is a protest against sanity and order. This is not King’s Dream in action. Malcolm’s vision, either. The New Black Panther fascists’? Absolutely. Al Sharpton’s? Maybe.

That’s just two incidents, looks like way more than a “few” to me.

Well, just look at all those “thousands”!

Like I said, that’s two incidents out of dozens. Keep those blinders on. 200 were arrested during the “peaceful protest” yesterday. What percentage do you reckon they actually rounded up?

You have an issue with reading comprehension. I said 200 were arrested and asked what percentage you thought were rounded up. “Thousands” is your final answer?

Jokes are supposed to be funny to people other than the originator.

At this very moment we are peacefully protesting this insanity on Fitsnews..

I was just sitting here reflecting on how much differently us racists of all colors here in South Carolina have behaved. I have time to reflect because – IT’S READING DAY!

2) – Kiss Your Mate Day ( Do not forget this one. Kiss her, then read her some poetry.)

People like seeing the violence, it translates into big money for corporate media, so that’s what we see.

I know right! It’s kind of like how on 9/11 there were like 310 million people in perfect peace minding their own business, but did you see a single story about about gardening or a lost puppy or the latest fashion trend? Nope, just fires and people burning. Jeez. Stupid Media.

Man these are just future Rhodes Scholars on their way to study group. Don’t mind them.

And lets not forget all of these troublemakers The police should have used live ammo. Houses burned. Property destroyed.

You are a joke. 100% Democrat Party operatives and voters from the Obama Revolutionary Army to burn our cities down.

…and so they put Baltimore on the list? You’re the joke. That city could blaze without any help.

These Amish people can really get worked up about things, especially when “they dirty” after plowing all day behind some mules

thanks — I didn’t catch it!

Hmmm, who to believe. Dirty politicians and city administration or dirty gang members?

I think it’s clear that the HBO series “The Wire” was a documentary.

What? Am I to believe that the Ice Palace folks just a few miles away at Ft. Meade — MISSED THE F’NG CLUES..??

Once again Shifty, you get it.

—- since most businesses damaged or destroyed are in or next to black neighborhoods, that way the cockroaches don’t have to run too far back to their nests..

Wish we could send the protesters/destroyers over to Ms. Rawlings-Blakes ‘hood.

Wanting to take off on something Colonel posted on another thread. The idea that you could actually just fire tennis balls and get the same effect. It seems to me, and this is a broader issue beyond Baltimore, that there is a lack of community policing i.e. cops on the beat. In a lot of the cities I travel to over the past 5 years I see less and less of it. Examples like North Charleston, Jacksonville FL, Dallas, Charleston itself – to name a few – it seems the cops increasingly patrol via car, loaded down with equipment, armed to the teeth, never interacting with the local populace. They only interact in incidents, sometimes violent incidents, but never on personal levels. NYC, San Diego, even parts of LA, I see cops walking, interacting. And those areas have lower crime rates than Baltimore. You have to wonder, if there had been more community policing over the past 10 years in Baltimore, would the initial riots not have started. The looting was a byproduct of the rioting. Had there been a higher degree of trust between the police and the neighborhoods, might things have remained more calm. There is ample evidence alone from our occupation of Iraq. In areas were troops (in many cases more elite troops) policed the areas and interacted well with the local residents, the incidence of IEDs was less, and there were more stable environments, versus less elite troops just driving around in HUMVEEs playing rambo. Colonel, your thoughts.

Of course Obama and his Justice Department put all their faith in these folks. Obama’s actions are a shame and disgrace to our American forefathers. Our fearless leader and the Democrats are no longer dividing our country they are leading the charge against it.

Just look at all this damage. They should have authorized the police to use deadly force.

Who the hell would believe anything a gang member tells them?

Who the hell would believe anything a police officer tells them?