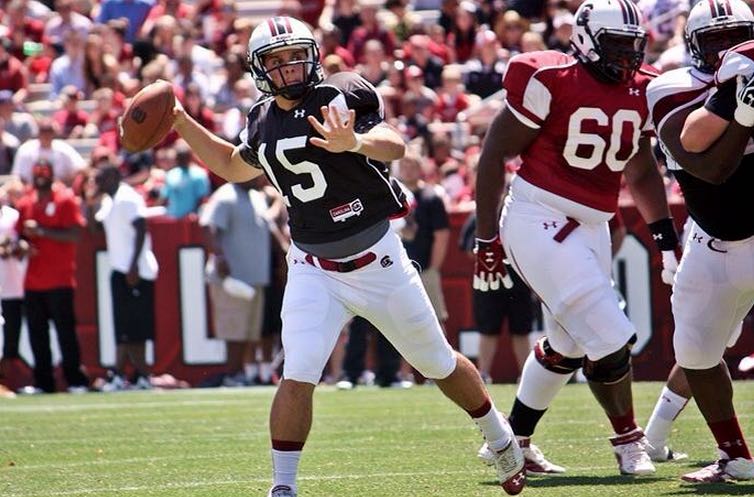 In over a century of football, South Carolina had never won more than ten games in a given year.  Or finished a season ranked in the Top Ten.

Then it happened … and not just once, but three times.  South Carolina also won a New Year’s Day bowl game three times in a row – downing a trio of national powerhouse programs in the process.

Most importantly, Spurrier’s teams beat arch-rival Clemson University five times in a row … and not some pushover Clemson team, either, we’re talking about a Tiger squad that was armed to the teeth with quarterback Tajh Boyd and wide receiver Sammy Watkins.  A team that rewrote the Clemson record book … even as it entered a period of unprecedented futility against its arch rival.

But within the Gamecocks’ streak of success there were missed opportunities …

South Carolina only captured one SEC east championship during its four-year run … and the program never made a bowl championship series (BCS) appearance.  And obviously the Gamecocks never got close to that elusive national championship.

Still, Spurrier entered 2014 cockier than ever … only to watch his program implode.

South Carolina was the most disappointing team in college football last year … by a country mile.  And the offseason hasn’t been much better.

Will 2015 see a return to national prominence?  Or another year of “rebuilding?”

The early reports aren’t good … with an analyst for Athlon Sports recently warning that South Carolina was “in danger of becoming (an) SEC East bottom feeder.”

Gamecock fans will get a first look at their 2015 squad on April 11 when the program hosts its annual Garnet and Black spring game.  Admission to the game – which will be held at Williams-Brice Stadium – is free.  (For more information, CLICK HERE).

Obviously South Carolina has to make monumental improvements on the defensive side of the ball after getting shredded last season to the tune of 432.7 yards and 30.6 points per game.  Hopefully new co-defensive coordinator Jon Hoke can help in that regard.

But there are also serious question marks on the offensive side of the ball, too.

Spurrier is now calling the plays for the Gamecock offense (which should clear up some confusion), but he enters this season without a proven quarterback for the first time in years.  There are also question marks along the offensive line with the departure of A.J. Cann and Corey Robinson.  That’s a shame, because South Carolina returns Pharoh Cooper – one of the top wide receivers in the nation – as well as considerable depth at running back, wideout and tight end.

South Carolina opens its 2015 slate against North Carolina in Charlotte, N.C. on Thursday, September 3.  It gets Kentucky, Central Florida, LSU, Vanderbilt, Florida, The Citadel and Clemson at home … and Georgia, Missouri, Texas A&M and Tennessee on the road.

Gamecock Hoops: Let’s Hear It For The Girls!