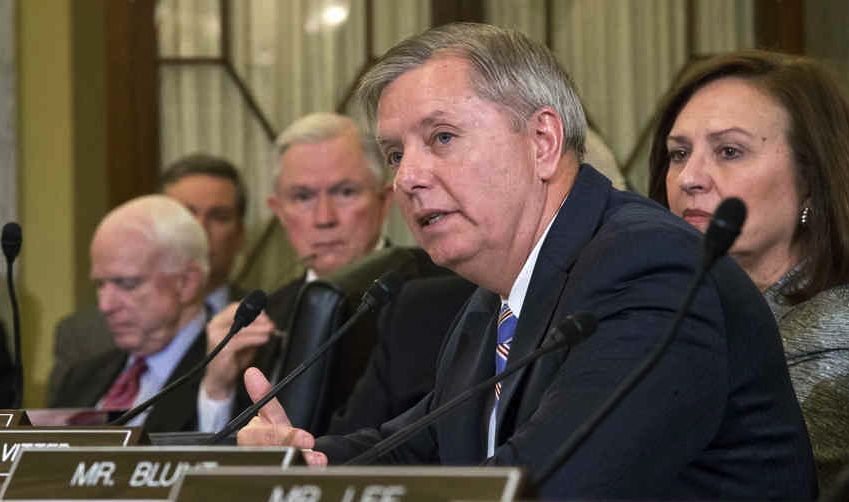 HIS WORDS, NOT OURS …

By FITSNEWS || U.S. Sen. Lindsey Graham dropped the “F” bomb, joked about his support of white men in all-male clubs and made fun of Presbyterians, Baptists and Methodists in a speech delivered to the Charleston, S.C. Hibernian Society last month.

In audio recordings from the event leaked to reporter Peter Hamby of CNN, the liberal “Republican” incumbent is heard speaking off the cuff to the influential all-male gathering of Irish Catholics.

“I’m trying to help you with your tax status,” Graham tells his wealthy audience. “I’m sorry the government’s so f*cked up.”

At another point during the speech, Graham makes a remark about his rumored presidential campaign – which we believe is something he is seriously contemplating despite the long odds.

The remark that’s got everybody buzzing?

“If I get to be president, white men who are in male-only clubs are going to do great in my presidency,” he said.

“We got any Presbyterians here?  You’re predestined to be here,” Graham joked.  “We got any Baptists?  They’re the ones that drink and don’t admit it.  Methodists?  Methodists?  (They’re) Baptists who can’t read.”

Courtesy of CNN, here’s the clip …

Actually the joke is that “Methodists are Baptists who can read …” but whatever.

Obviously Graham – who has his reelection pretty much sewn up – was joking.  But still, this isn’t exactly the sort of thing a candidate who’s been consistently polling below 45 percent wants to see hitting the press six days before voters go to the polls.

Thank God we endorsed a dead guy for this seat …

“and made fun of Presbyterians, Baptists and Methodists”

Hell! I’m Baptist and I even make fun of them. Lindsey is a Baptist. Why do you think I picked this handle?

A bus load of Presbyterians went over a cliff and they all died. Saint Peter met them at the Pearly Gates and took them on a tour of Heaven. After about ten minutes they came to a tall fence around a large compound. One of the Presbyterians asked Ol’Pete about it. “Ssh” he said, “that’s where we keep the Baptists and they think they’re the only ones here”.

too bad for that, one frag could of made a difference in Irag.

No. You are just fucked up in the head.

Hell.There are more gay white men in the clergy than anywhere else,with military,a close second.I love doing role-play with those guys,but nearly all are married.Wives can be really,really mean.Watch out.https://www.youtube.com/watch?v=00tjF2ROlwE

We always hire gays for church music director. They were usually married to a young inexperienced girl. We are so open minded.

They are in every county and town, even Mayberry.

I always wondered what the deal was with Floyd and with Howard.

Tell me something I don’t know;)

Tell me something I don’t know;)

Will this guy just come out of the closet already?

I’m actually speechless for once. Ms. Lindsey has rendered me temporarily silent.

I thought he was talking about a bath house too. In his presidency, all white men in an all-male club are going to do VERY well. If they think getting it on with a shriveled old white man is doing well, that is.

Where is the info on the trip the editor alluded to.. The one with a special friend to Ireland or somewhere in Europe? Made it sound like he was with his gay lover.

“If I get to be president, white men who are in male-only clubs are going to do great in my presidency,…”

I think he meant “are going to do ME great …”

Give him a break by god, he is a republican !!!

or Jeb or Jeg.

Obviously this was a lame attempt to be funny (I actually liked the line about Methodists) but it was still stupid as all get out.

Dead Strom would have gotten the punchline right.

Geez. Dude can’t even deliver jokes so old their whiskers have whiskers.

Still, the gullible will vote for this scoundrel. Yesterday, I spoke briefly with an old friend who had a Lindsey bumper sticker on his vehicle. I have an anti-Lindsey sticker on mine. I asked him how he could support this POS. He said that he too was troubled about amnesty and Graham’s constant annilingus on Obola, but at least Lindsey is “pro -gun”. I answered “for the moment”. I forgot to tell him that Lindsey has received generous contributions from Michael Bloomberg. Does anyone really believe those contributions don’t have expectations attached to them?

He is a pub moderate, in SC that is taboo. We only vote conservative perverts only.

He will brag about voting NO after he sneeks in a yes vote. Just like Obamacare.

But he dresses so nice.

Did the meeting occur at the Hibernian Hall. It has a fateful history for South Carolina and the South. The Democratic convention headquarters for the faction of the Democratic Party supporting presidential candidate Stephen A. Douglas (1860) before the War of Northern Aggression was held there. They couldn’t unify to party assuring Lincoln’s election.

Ok, so now if he lets loose 2,178 more gaffes he will tie Joe Biden (but only if Biden loses his ability to speak today).

It wouldn’t matter if Joe’s tongue fell off, he would write something stupid on a whiteboard.

Sic Willie knows, or he should know, what the norm is for speakers invited to the podium at the Hibernian. This has gone on for decades. His beloved Sanfraud couldn’t stand the heat and left when they played “Don’t cry for me Argentina”. By the way, another fact that Sic Willie acts like he doesn’t know, you do not have to be an Irish Catholic to be a member.

If the speaker is a politician, they should know by now that at least one person in the room does not like them and has a camera.
Even if Graham lives in such a cocoon that he’s oblivious to 21st century technology, any politician should know better than to say in that kind of ‘private’ setting what he would not say on camera at Fox News.

Old rules said you had to be Irish Catholic, not so much any more. I personally know a couple of Jews and Greeks that are members.

but what about The Blacks?

For the record, the Hibernian Society of Charleston is not the Ancient Order of Hibernians — although there certainly may be some overlap — and has members who are both Protestant and Roman Catholic.

What’s the big deal? He’s telling the truth. Especially about the Baptists.

Alternatively, you could just tap your foot in a D.C. bathroom stall and you’ll be doing just as great, right Lindsey?

I read somewhere that Obummer prefers older white men. Now it looks like Grahamnasty has admitted the same thing. I guess that explains why McCain is regarded as something besides a senile old fool. Man toy maybe ???? It makes me sick to think two out of the three call themselves “Republicans”.

How can you be a republican and not like old white men. It would be a case of self loathing.

Got me there since IR12. LOL

could this race get any more bizarre?

The jury is still out on that question, but word has it they are working on it.

Fuck him and the horse’s cock he sucked.

So Graham is into white little boys?

So does he only ride the white chocolate Hershey highway?

If Lindsey became POTUS, who would be FLOTUS? He CANNOT survive the vetting process!

You guys can try to make this a gay joke if you want, but you know this is a Mitt Romney type gaff. It shows what real Republicans believe. i.e. that they are elected to to benefit rich people. They don’t give a crap about anyone else and for that reason if you are not a rich, you are being screwed by Republicans.

“you are being screwed by Republicans”

Do you mean homosexual Republicans?

It’s impossible to grow up gay down South without a sense of humor.We haven’t had a real republican in office since,Richard Nixon.Now,’politics’ is just one big freak show.Next election,my vote is going to,EXXON..You think any of this bullshit matters?Good for you.

Lindsey graham. Giving the people what they want
If what the people want is a closeted gay old republican in name only, who never met a Sunday morning political chat show he didn’t appear on.
Lindsey graham cracker crust is to politicians as alleged ex sheriff James r Metts is to law enforcement.
People of South Carolina Couldn’t you find a republican to run for office ?!??
If you keep re electing bottom of the barrel candidates (yes I’m talking about you bobby top flight Harrell) … You’ll continue to garner the attention of the other 49 states (and not in a positive fashion). Mississippi is mocking South Carolina – it’s that horrible!
Anyway back to graham for a moment
Being a member of a while all men’s club is bad enough. Being caught telling white men you’re gonna take care of them when (not if but when) you are president … Kill me now. You’re just not making this $&@! Up!!
This really happened.
Vote libertarian. I am.

Lindsey Graham for president to do list:
•alienate non white voters – check
• “take care of” all white males at the males only clubs. One male at a time
• confirm heterosexuality by marrying Ellen degeneres (Wait? She’s already married?!) check anyway
• appear on Fox News Sunday morning with Chris Wallace to apologize to Christians. And Methodists.
• try to talk bob schieffer in to letting him apologize on Meet the Press. Apologize to the democrats for being more offensive than Joe Biden (check)
• hope that his flamboyant Jedi mind tricks will work on the other 49 states voters. Check
• support our troops. You know … Don’t ask don’t tell. Check