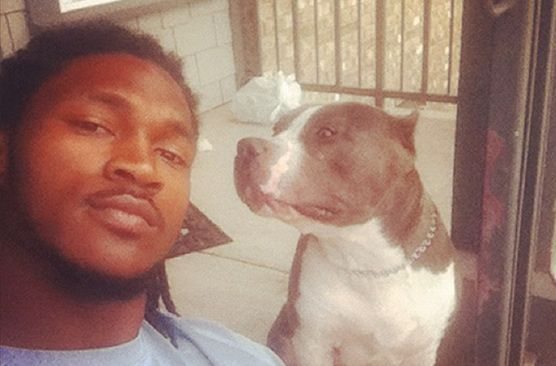 || By FITSNEWS || Houston Texans’ defensive end Jadeveon Clowney was transported to an emergency room in Pearland, Texas earlier this month after he was bitten on the right arm by teammate D.J. Swearinger‘s pit bull (above).

News of the bizarre injury first broke on CBS Houston – and was soon confirmed by Swearinger, a Texans’ defensive back who was also Clowney’s teammate at the University of South Carolina.

“My dog and (C)lowney were just playing and it wasnt a serious bite,” Swearinger (a.k.a. “Jungleboi Swagg”) tweeted.  “They were only playing … cool out on all that.”

Clowney, the No. 1 pick in the 2014 draft, is still recovering after undergoing a risky microfracture surgery on his right knee in December.  Previously, Clowney suffered a meniscus tear in the knee after landing awkwardly during his NFL debut on September 7.  He returned to action seven weeks later, but struggled to recapture his trademark explosiveness off the line and was experiencing swelling in his knee after exertion.

Basically, his rookie season was a bust …

Last month, the Texans said Clowney was progressing well following his microfracture surgery – which raised eyebrows given the arduous recovery and risk it entails.  Microfracture procedures reportedly have a success rate of 75-80 percent – although there are numerous professional athletes who have seen the procedure effectively end their careers.  Many others have come back from the surgery at far less than their original capabilities.

We’re obviously hoping Clowney is able to come back at full speed … even if that means he’ll be terrorizing our founding editor’s new “man-crush,” Indianapolis Colts’ quarterback Andrew Luck.

Grady Jarrett Is Not Very Original …