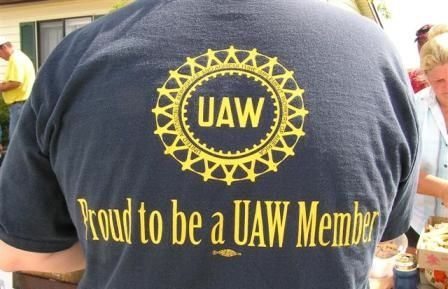 THIS IS “WATCHING OUT FOR WORKERS?”

|| By FITSNEWS || This website is no fan of Big Labor … as we’ve made abundantly clear over the years.  Unions are cancers … and we view ongoing efforts by the administration of Barack Obama to prop them up as being fundamentally harmful to the economy, and to workers.

That’s because Big Labor doesn’t care about workers … as evidenced by this report from Bloomberg.

The Bloomberg report exposes a glorified caste system imposed by the United Auto Workers (UAW) in 2007 as part of its negotiations with Chrysler, Ford, and General Motors (a.k.a. “Government Motors”).  Under the terms of the deal, 50,000 workers already employed at automotive manufacturing facilities got to keep their $28 per hour wages (amounting to $58,000 a year, not counting benefits) – while wages for new workers were slashed.

“In 2010, Sharron Chambers was a member of the middle class, earning between $40,000 and $50,000 a year at Chrysler’s sedan plant in Sterling Heights, (Michigan),” the Bloomberg report begins. “Since then she’s had her pay cut in half while doing the same work. She’s been unable to make the monthly payments on her car and house and has lost both. She had to move with her two children into her sister’s town house in suburban Detroit. They had to sleep on a mattress on the floor.”

How many union workers are facing Chambers’ plight? An estimated 30,000 … and it’s about to get worse for them as the big three automakers begin contract renegotiations.

In addition to creating an inherently unequal caste system within the union, the deal has also driven wages down for non-union workers in the auto parts industry, Bloomberg reported.

“A quarter of auto parts employees make less than $13 an hour for jobs that once paid $18,” the wire service noted, referencing data from the National Employment Law Project.

Gotta love how those unions love the “working man,” right?

Anyway … something worth considering as Big Labor makes a big push in the Palmetto State.

John Boehner’s Backers Get Paid Off