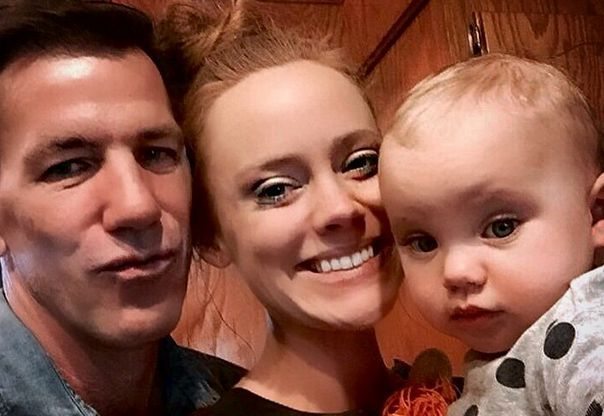 The 52-year-old playboy and his 22-year-old girlfriend appeared together in a photo with their daughter, Kensington Calhoun Ravenel.

The tag on the photo – posted to Dennis’ Instagram page – says “Family is Forever.”

Ravenel ended his relationship with Dennis last October – days before the conclusion of his disastrous 2014 U.S. Senate campaign.  In late January, the two were said to be communicating exclusively through their attorneys.

Dennis said at the time Ravenel scared her and that she was “considering a restraining order” against him.

“If you only knew half the stuff he’s done,” Dennis told us. “I just want him to help himself and do what is right by his daughter, and by me. He’s broken so many promises to me and to our ‘family,’ I pray, pray, pray that he gets his life on track and becomes the Father I know he wants to be.”

We asked Dennis at the time if she would ever consider getting back together with Ravenel.

“He’s lucky it was me that he had a child with,” Dennis continued.  “Any other woman … hell, any person … would try and screw him over so bad after the things he’s done.”

The second season of Southern Charm airs Monday, March 16 on Bravo TV at 10:00 p.m. EDT.  Last year’s show consistently drew more than a million viewers per episode.  Ravenel has been a main cast member from the show’s inception, while Dennis becomes a main cast member this season.

FITS founding editor Will Folks – who had a cameo appearance in the show’s first season – described the program as enjoyable mindless entertainment.

“Obviously it’s a train wreck – and its star is perpetually on the verge of a Randy Quaid-style meltdown,” Folks said. “But who isn’t gonna watch that? I mean come on.”