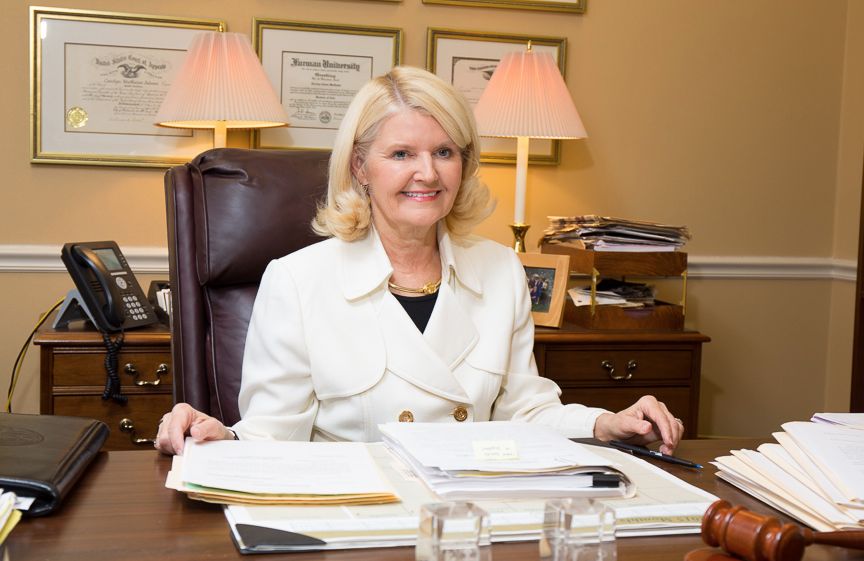 || By FITSNEWS || This website has written extensively on the nepotism angle related to this week’s contentious race for a top judicial post in South Carolina.  In fact our coverage has sparked mainstream media interest – which has in turn sparked S.C. Gov. Nikki Haley‘s involvement in the race.

Anyway, having blown up this story in a manner benefiting one of the candidates – incumbent administrative law judge Carolyn C. Matthews (above) – we figure we owed it to her opponent, Bill Funderburk (husband of S.C. Rep. Laurie Funderburk) to parrot a few of his message points.

You know … even though we’re all “unfair, imbalanced” and everything.

According to Funderburk supporters, the nepotism angle we’ve been covering isn’t as serious as the issue of incumbency – pointing to Matthews’ sixteen years in the same post.

“Nepotism is bad but the power of incumbency is worse,” one lawmaker supporting Funderburk told FITS, adding that “attorneys in the General Assembly will not vote against an incumbent judge.”

Why not?  Because if that judge loses, the lawmaker is “marked” – and not just by the judge in question.

“They all put a mark on (the legislator),” our source said, referring to a network of judges who reportedly work together to stave off challenges to their positions.

The result of this system?

“You can’t get rid of a bad judge,” the lawmaker said.

Frankly, we don’t think the real issue here isn’t nepotism.  Or incumbency.  It’s that South Carolina is the only state in the nation which permits lawmakers to select and vote on judicial candidates – a fundamentally flawed system which continues to produce corruption, not competency in the judicial branch.

That’s the real story of this pitched insider battle between a veteran judge and a lawmaker’s husband … that the state’s legislative branch simply cannot be trusted with this responsibility.  In fact, as state lawmakers mull major reforms to South Carolina’s existing (and woefully under-enforced) ethics laws, we hope they put the scrapping of legislative elections for judicial candidates near the top of the list.