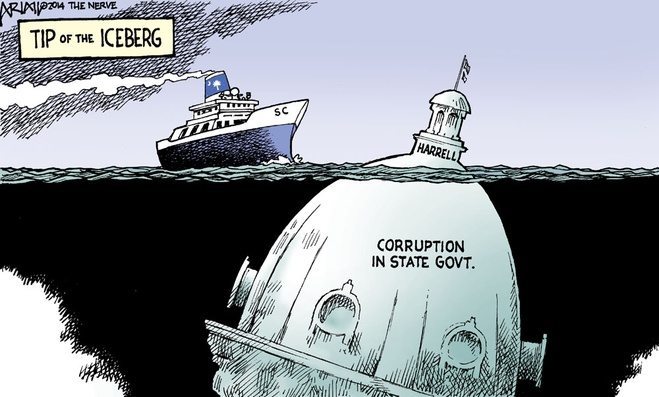 By FITSNEWS || Ever since this website first reported on a major corruption investigation at the S.C. State House, rumors have abounded as to the nature and extent of the probe.

Thousands of words have been written in an effort to determine who’s being investigated – and for what.  Our most recent reporting on the matter can be found HERE, but the bottom line is simple: Until the team of federal-state prosecutors completes its work (and issues indictments) no but they know for sure what’s going down.

Anyway … this week our friends over at The Nerve, a publication of the S.C. Policy Council, released a political cartoon by Robert Ariail addressing the probe.

In the cartoon (above), Ariail depicts the recent scandal that took down former S.C. Speaker of the House Bobby Harrell as being the “tip of the iceberg” of corruption in South Carolina government.  He also depicts the “ship of state” as steaming headlong toward its date with disaster … completely oblivious as to what is lurking below (sort of like our citizenry is completely oblivious to … well, lots).

We can only hope Ariail’s sources – like ours – are accurate and the true depth of all the shady self-serving behavior at the S.C. State House is brought to light.

More to the point, we hope voters can steer the ship away from corrupt leaders in the future … although the impending reelection of ethically challenged “Republican” governor Nikki Haley doesn’t exactly bode well.

As Seen On A South Carolina Highway …

She should be “Patient Zero.”

Sheheen seems to be garbled. He has been in the senate long enough to be involved in whatever is going on there.

What are you “frustrated” about?

All you do is criticize the Democrats.Its obvious you are a Republican.

Republicans dominate ALL levels of government in this state

Sheheendoesnt have a chance and everyone knows it ,but you a so called”frustrated” voter want to talk about him?

Come on tell us how “frustrated” you are with them!

Thanks for your reply. I have never joined the Republican party or donated any $ to it. But I do vote Republican much more often than Democrat. Just so you know, I am frustrated by some Republicans too, like Mark Sanford, I still cannot believe he got elected to any office after the Hiking-the-Trail fiasco. Doesn’t reflect well on our state, does it??

” I still cannot believe he got elected to any office after the Hiking-the-Trail fiasco. Doesn’t reflect well on our state, does it??”

…and I can believe that the people of SC would reelect Haley after the disastrous leadership or rather the lack leadership that she has shown. News flash, Nikki Haley is a far WORST governor than M. Sanford.

Sadly, it seems that most voters are not swayed by corruption any more, regardless of party. Most people just vote for whoever they think will put the most $ into their pockets.

No they don’t…in South Carolina they vote for whoever has an “R” behind their name. A sloth would win here as long as he’s a Republican sloth. That’s the funny thing about the majority of us who live in SC, we are far from rich, yet most vote for the party [R] who clearly represent the interest of the 1% and corporations….go figure. But thanks for the lively discussion :)

I respectfully disagree. A friend of mine is now running for the state legislature as a Republican and I will be very surprised if he is elected. (Race is the most powerful factor in local elections, but people don’t want to talk about that.)

So, you’re a friend of Tony Culler’s, are ya?

I have never heard of Tony Culler. But, from your comment, my guess is that he has a tough challenge ahead of him.

My mistake. Didn’t read your comment carefully enough. Culler is running against Clyburn for the SC House. A VERY tough challenge. He’s the one who made the “Gremlins” remark against gay married couples.

Anyone who worked for a cabinet agency during Sanford’s 8 years knows for a fact that he was not one bit better than Haley has been the last 4.
She has only built on the messes he created. That’s why they seem worse now. They have been festering.
One day SCGOP voters will wake up to the fact there is more to governing than a meaningless dog whistle political gesture.

I still cannot believe he got elected to any office after the Hiking-the-Trail fiasco.

I’m not surprised. Name recognition is golden in this state.

The GOP has lost its way. It has turned into its own brand of mafia. It protects itself at all cost, it does not often punish its evil doers. It spends public money to prop itself up and will do anything to please the money masters.

As a 65 year old republican, I know what I am talking about.

The Republican Party no ties to values that I recognize. Though I must say, the Dems are not much better.

No Mark, they are the same, both are corrupt. Immoral, unethical and feckless liars!

And adding to your analogy is the fact there a big, fat rat who is singing.

If it incarcerated 90%, including Haley, would suit me.

With all these problems, Sheheen is right. We should be debating the Confederate flag. WAIT! WHAT!

What difference does it make what Sheheen wants to “debate.”

He is going to lose.

I vote Republican, not because I’m satisfied with my choice, but because it is the only viable choice. I may vote Democrat in the state constitutional offices other than governor. I think they should all be cabinet offices – appointed by the governor and confirmed by the Senate.

Not a very good rationalization there Republican.

Gee you “only” vote for Nikki Haley because there simply is no other “choice.”

Why is it that all you Republicans here come up with that kind of “stuff?”

You vote Republican because you are a Republican.

At least have the courage of your convictions rather than that silliness.

Yeah you have no “choice.”

I’m a Republican in ideology, but that does not guarantee the candidates competence. I don’t agree with Romney on a lot of things , but he was a competent governor, businessman and ran a successful Olympics.

I’m for Education Reform that gives all parents viable choices they can afford. Haley has given us a little of the same ole same ole. Sheheen wants a lot of the same. I want the roads fixed. Would even support a gas tax increase, but not if statehouse politics and political contributors are going control how it is spent. People complain about the governors appointees scandals, but at least they can be removed (forced to resign) if elected we would never get rid of them without a court case.

Haley could behead puppies on live TV and still get reelected.

If she’d behead cats instead I’d vote for her for president.

Would anyone in their right mind trust Haley, Eckstrom, Peeler, etc., with their wallets?

I certainly would not trust Obama or Biden with my wallet.

Why can you Republicans leave DC politicians out of a discussion on SC politicians….deflect much?

Because talking about Democrat-controlled DC takes everyone’s mind off the fact that Republican-controlled SC is in far worse shape.

Because talking about Democrat-controlled DC takes everyone’s mind off the fact that Republican-controlled SC is in far worse shape.

Cue that idiot “Buz” with a 6,000 word essay about long-forgotten stuff in Myrtle Beach.

Nah No need. It will be what it will be. “Coastal Kickback” will be a relatively small part of it, due to negation of the Statute of Limitations from Shep Guyton,
Harrell and several others spilling what they know.

Not ‘long-forgotten’ for Buz. He has often commented about his FBI contacts and in my opinion , is still trying to take down those he falsely accused of crimes in what he defines as ” Coastal Kickback”.

I really believe that is why he has tried to befriend some of those same local politicians and public servants after calling for their resignations or arrest/indictments-his WORK is not done.

Yes, two party rule cuts the corruption in half.

Actually, it multiples corruption by two.

Only when “bi-partisan” committees are formed.

A lot of them trusted Harrell. I am beginning to believe Sic has fallen in love!

Henry McMaster is salivating! Nikki is going down and he will finally be Governor!!!!

I was thinking about a different meaning for going down…

Maybe it will be Bakari who winds up being Governor.

Yep, I thought about this, too. SC first black gov by default.

Haley is target one without a doubt. Harrell did not rollover so easy without the knowledge that Haley started the probe ordering Keel and Wilson to target him……this aint over and if the voters put Haley back in office Tuesday our state will be futhur embarrassed.

This whole probe issue is confusing to me. Are you saying that Haley initiated the probe and that she is the primary target of the probe??

She is saying Haley targeted Harrell but its going to backfire after Harrell tells what he knows about Haleys criminal behavior.

Harrell shouldn’t have to tell the feds about Haley’s criminal behavior. It’s been out there for ALL to see since BEFORE the 2010 general election. It came out when she finally released her tax records just before the primary that year.
I am specifically referring to the illegal, unregistered lobbying by a sitting house member that was later whitewashed by the house ‘ethics’ committee after her Sanford defense: ‘everybody’s doing it’.
Mortgage fraud conspiracies need to be prosecuted, but that is almost all Bill Nettles and his US Attorneys have been doing while all this political corruption bubbles and boils around them.

We deserve it.
But, we are never humiliated enough to stop, think and do something about OUR problems in evaluating candidates. Our voters only respond to the dog whistles.

I have been a fan of Robert Ariail’s for a very long time, but this may be his best one yet. Bravo, sir.

Please do not let Toal slip through…..

Damn, Robert Ariail is good. Whatever you think about the merits of the story, his cartoon is a fantastic depiction of it. How La Socialista justified firing him and keeping the worthless Warren Bolton and Pippi Wrongstockings is beyond comprehension.

Amen! Huge loss. Why did they let him go when SC has more grist for politicalcartoons than any of these united states…

Call me a doubting Thomas, but on this one, I’ll have to see the wound(s) before I believe any other actions take place.

Is this the reason she is going to India right after the election? To avoid the Feds?

I will be sooo disappointed if more pol heads do not adorn fed pikes..

It’s not likely that anyone will get indicted. These probes and investigations muddle on for years. Just look at the Myrtle Beach Ad-Tax fraud. We’re still waiting for that investigation to produce indictments. When you consider that all the government attorneys. law enforcement agents, investigators, and judges owe their existence to the very politicians that they “attempt” to persecute it just becomes a game with no end. The Harrell plea is just a fluke, an exception, not the rule. Call me cynical.

Diogenes searched for that honest human
I think he would’ve been sorely vexed with South Carolinians.
The more things change …

Bobby Harrell, who had to resign his office after federal charges of misusing campaign funds, got 40% of the vote – what?!