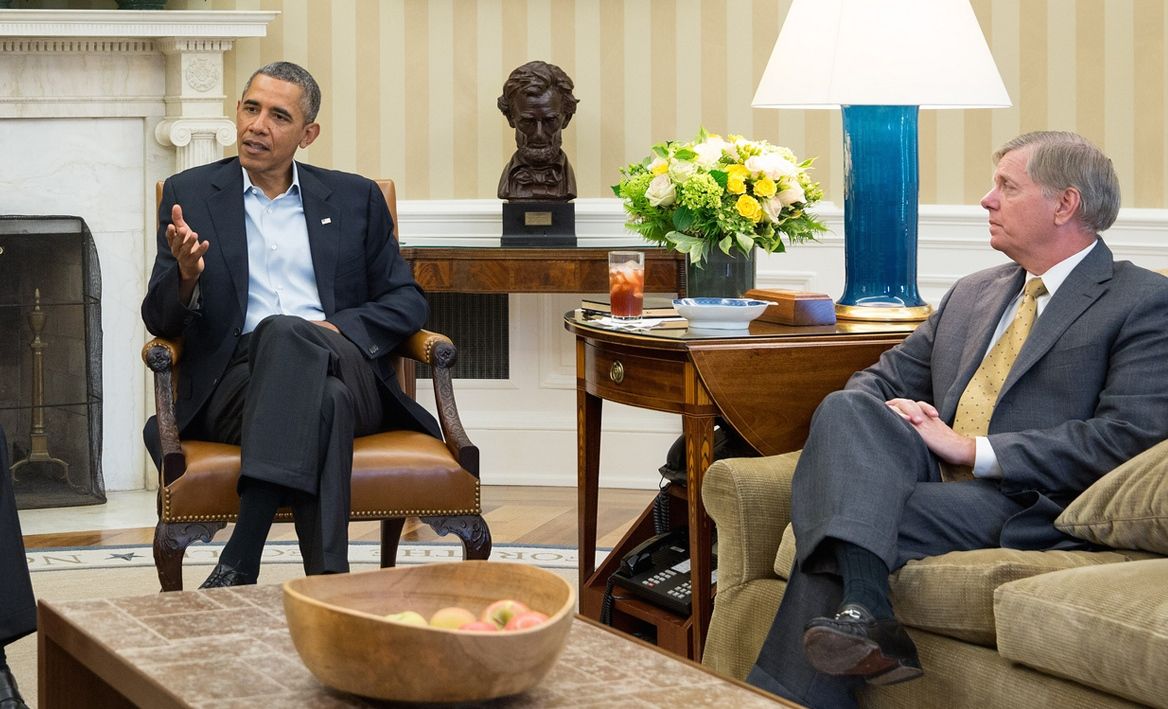 By FITSNEWS  ||  U.S. Sen. Lindsey Graham has all the time in the world … at least when it comes to appearing on establishment-friendly “inside the Beltway” talk shows in Washington, D.C.  In fact with the exception of his fellow fiscally liberal warmonger John McCain, no politician has more time for such self-serving hyperventilation.

Of course when it comes time to come back home and face the people of South Carolina, Graham insists on picking his crowds.

And he’s definitely got no time to debate.

Graham’s cowardice – nothing new to readers of FITS – drew a swift and stern rebuke from S.C. Sen. Brad Hutto, the Democrat campaigning for this seat.

“Lindsey gets breathless with excitement when it comes to sending our young men and women to war but is terrified at the thought of defending his own record in a public debate,” Hutto said. “(This) seat does not belong to Lindsey Graham, it belongs to the people. The people deserve to hear from him.”

Hutto specifically singled out Graham’s recent demand that U.S. ground troops be sent to Syria as evidence of his lack of “courage.”

“How can Lindsey continue to advocate for American boots on the ground all over the Middle East and beyond when he himself doesn’t have the courage to participate in an hour long debate with me and Thomas Ravenel?” Hutto added.

At this point it’s abundantly clear Graham – despite his abysmal approval ratings – is going to be reelected to a third term as South Carolina’s senior U.S. Senator.  Hutto is simply too liberal to have a prayer against him, and so far Ravenel’s petition campaign has failed to ignite.

That makes it all the more embarrassing for Graham …

Seriously, man.  Show some balls.  If you’ve got them.

I saw what you did there!

“How can Lindsey continue to advocate…when he himself doesn’t have the courage to participate in an hour long debate with me and Thomas Ravenel?”

Careful challenging his “courage” there fat boy, the only uniform you ever wore had a Boy Scouts of America patch on it. As for why he should debate you – he probably should, get rid of that remora leech drug dealing, drunk driving, FEC rule violating, baby daddy and “reality TV star” buddy of yours that you’re hoping will take some votes from Lindsey when he’ll really take them from you and maybe he will.

Colonel, there you go again using truth and logic.

I got this medal for a paper cut in Desert Storm, and This one for an intense court room battle in Kuwait (had three objections over ruled and had to jump on a live subpoena to save us all). This one was for action above and beyond the call of duty (showed up early for all the Article 32 hearings for two years straight). The Rainbow Warrior medal is for classified actions in the rear.

We all get the “rainbow ribbon”, ostensibly for completing initial entry training and advanced individual training but you may be on to something about it recognizing an individual soldier’s ability to BOHICA.

Ya know I don’t think I would be casting physical aspersions on anyone if I was supporting Lindsay Graham Bub.

Given the choices I will likely vote for Graham. Hutto’s a liberal turd and we’ve got more of those than we need now. Should Republicans take the Senate, Graham will be forced to toe a far more conservative line – I’m banking on it.

And Grahams a worthless piece of Neocon shit.

And we have enough of those.

Gee thanks for the epithet lesson Bub!

Once again Deo, thanks for the insightful commentary.

He will toe the line nicely when confirming Obama’s new Attorney General and any other ultra-liberal appointments, as usual.

Graham will be forced to toe a far more conservative line – I’m banking on it.

I can dream can’t I? Face it boys and girls, Lindsey Graham will continue to be the senior senator from South Carolina, like it or not.

Lindsey Graham will continue to be the senior senator from South Carolina, like it or not.

I thought the same thing…on the surface it seems a ridiculous statement and I was about to post a similar response to yours…but after thinking about it he probably has a point even though I despise Ms. Lindsey.

You are a true conformist to what is wrong with the USA. Deny it all you will. But it very obvious in your hundreds of postings on this site, and elsewhere. You are not a solution. You are a part of the problem. You need to be stripped of rank.

I’d love to know where else I am posting.

As for conformist, no, not hardly. Realist? Guilty, but not a conformist by any stretch of the imagination.

Just remember, good ole King George actually laughed at the colonists early visions for government…thinking them impossible and I’m sure he considered himself a realist.

Debates are a waste of time. A vote for a Democrat is a vote for our enemies abroad, evil and perversion.
Independents? Sore losers that neither party wants anything to do with and no chance of winning an election. O

Agreed, ” If you ain’t White, you ain’t right, Nuke the planet. Install Republican rule, ( Hitler ) and go on down the road. UHH-RAA !!!

A vote for a Republican is a vote for our enemies domestic…Exhibit A…the Koch Brothers!!!!

And don’t forget Republicans support evil and perversion as well….just ask the Lov Gov and his airplane diving brother who has kids dying on their property…

They are not mine.

Well…….lets see. The entire state’s media is in the hip for Graham and Clyburn and Scott. Just look at the actual coverage that is being reported. Morning drive personnel can scream all they want too and Jon Stewart can playfully mock til the cows in Clemson come home; but until Goliath Graham is hit with an energy bill from a poor black woman whose only son has gone off to DIE for Oil, the voters will never see a “choice”…!!

According to Politics 101, a candidate is not supposed to debate opponents over which he has a substantial lead. Graham is right not to debate people like Revenal.

i would not even acknowledge that guy as a canidate.

This gutless wonder has no qualms about sending soldiers overseas to bleed and die for his cronies in DC but doesn’t have the balls to debate. WOW What a statesmen. I may be the only person in SC that doesn’t vote for this POS but I will be one. I can’t vote for Hutto, philosophical differences, but I will vote for T Rav just so I don’t vote for Grahamnasty.

These ARE the ones you elect. All Republicans ? I’ll take Obama and Ebolia for 2000.

He would be ripped to shreds, and he knows it. Do the debate any way with a card board cut out of Miss Lindsey.

The cardboard cutout would do a better job than the man himself.

Graham To Obama, “Now you understand I have to talk shit about you until after the elections, right?” …. After November, I will be able to do more to help you.”

Graham doesn’t need balls. He just needs straight ticket voters, and SC has plenty of those.

Graham is six points in the lead, has the ball on a first down, there’s only 20 seconds left on the clock and Hutto has no time outs. Why the hell would he throw a pass?

Why the hell would he throw a pass?

Chad Morris on line one…

McCain was on the news last night, basically pounding his fist while demanding troops on the ground to fight ISIS. Meanwhile, the border with Mexico remains wide open. And he wants to go on another killing spree – the cost will run easily up to 10 Billion. Meanwhile, military resources are for weapons are being depleted to dangerous lows.

And, the press never asks him: ‘Don’t you think we need a War Tax this time?
Or, is it too important to keep those tax breaks and capital gains and carried interest rates the way they are for people like Mitt and your heiress wife, the adulterous Cindy McCain?

Graham doesn’t even have to be alive to win… hell, South Carolina would elect his suit!

I wish they would. Somehow, I believe his suit would be less damaging to our country over the next six years.

Heck, Lindsey is not worried. He has been in North Carolina campaigning for a couple of candidates over there. His biggest worry is the young man from Sptbg. (Gowdy) but that won’t be soon.

I want Graham to be burned at the stake.

To the Millennials, the fix is in. Look, even Boomers could not have fathomed the depths of the takeover of our government. As late as 2010 the glaring consistency to empower the Establishment (Democrat/Republican) really became crystal clear with the put down of the Tea Party at the IRS level and the embrace for illegal immigrants made possible by ignoring federal law and state sovereignty. The Establishment controls corporations, politicians, events, outcomes, the military, healthcare, and our very existence. Is there a solution?

Embarrassing fro Graham? In what way, that he beat back an entire pack of cuckoos in one night and has no credible challenge to this day? What political consultant would advise a candidate to risk a comfortable lead by debating two wingnuts who just want to see themselves on TV. Whether you agree with Graham or not, that’s just nutty logic. This is real politics, not rainbows and unicorns.

Besides, who in the Hell cares about drawing a “stern rebuke” from Hutto?! Good Lord…

Not many smart people in South Carolina. But Lindsey is certainly causing more conservatives in SC to vote democratic.

difficult to imagine anything of substance coming out of such a debate. also hope Ravenel dies from a coke induced cardiac arrest.

I get madder about this the longer I think about it.