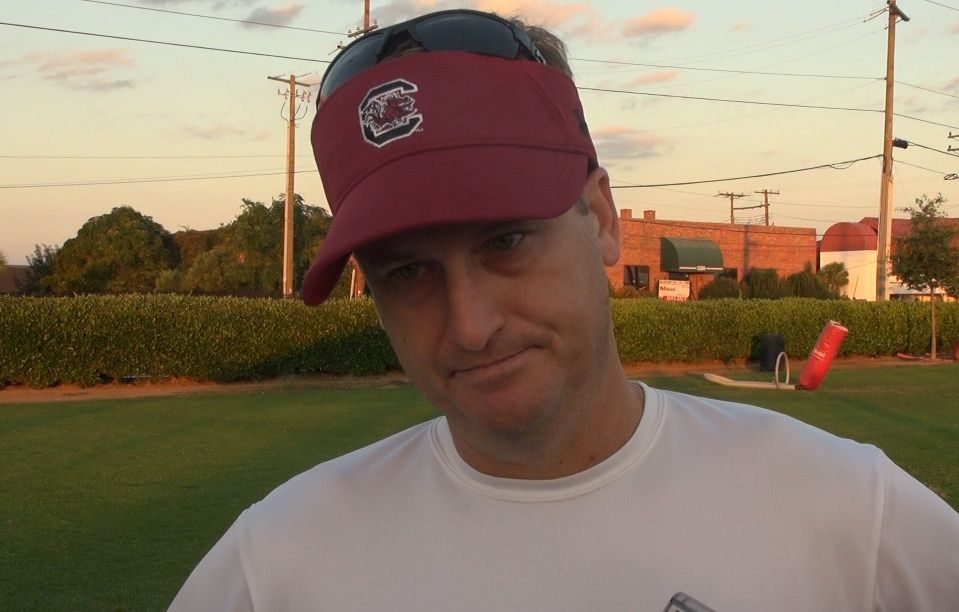 By FITSNEWS || No, no, no, no … this is not one of those posts.  There is no evidence University of South Carolina head football coach Steve Spurrier has any intention of retiring anytime soon … nor is there any evidence his son, Gamecock recruiting coordinator, co-offensive coordinator and wide receivers coach Steve Spurrier Jr. is the program’s “coach in waiting.”

And no … this discussion has nothing to do with the fact the Gamecock football team is off to its worst start in six years, and unranked for the first time in four years.  Or that this rapid descent was punctuated last weekend by an inexcusable 21-20 loss to Missouri in which the head ball coach’s legendary offensive genius seemed to be in short supply.

Or totally out of stock, to put it accurately (no pun intended) …

But we’re not going to “go there.”

This website tried to run Spurrier out of town on a rail following the 2009 season – and with good reason (or so we thought at the time).  The Gamecock program appeared to be going nowhere fast – losing a bowl game named for a pizza delivery website to a team from the now-defunct Big East.  Spurrier was 35-28 overall at the time, with a losing record against SEC competition.

We challenged Spurrier to win games … and he responded.  From 2010-13, his Gamecock teams went 42-11 – with one SEC East championship followed by three consecutive 11-win seasons as well as three straight Top Ten finishes and New Year’s Day bowl victories.  The Gamecocks finished the 2013 season ranked No. 4 in the nation – a school record – and up until last weekend’s debacle had been ranked in the Top 25 for sixty-nine consecutive polls, also a school record.

Not only that Spurrier has reeled off five consecutive victories over South Carolina’s arch-rival Clemson – and done so at a time when the Tigers have also been among the nation’s elite programs.

Prior to Spurrier’s arrival, South Carolina had won ten games just once in more than a century of football – and had never finished a season ranked in the Top Ten.

Simply put, he turned around a program many felt would never be successful … and he did it based on successful in-state recruiting.

Since 2011, South Carolina’s top recruiter has been his son, Spurrier Jr. – who like his father is in his tenth season in Columbia, S.C.

Prior to joining the Gamecocks, Spurrier Jr. coached alongside his dad for two years with the Washington Redskins of the National Football League.  Before that he spent three seasons as the wide receivers coach at Oklahoma under Bob Stoops – helping lead the 2000 Sooners team to a national championship.

The 42-year-old Palo Alto, California native has grown up around the game – and played college football at Duke, where he earned his bachelor’s degree (prior to earning a master’s degree at Florida).

So … is “HBC Lite” ready to take the reins of the program his father built into a contender?   And if so, will he get that chance?  And if so … when?

Both Spurriers have gone out of their way to downplay the speculation that the Gamecock job could stay “in the family” when the elder Spurrier decides to retire.

Meanwhile Spurrier, 69, has said publicly he wants no role in the decision-making process – going so far as to imply that his involvement would be inappropriate.

“I would have no input whatsoever on who follows me here at South Carolina,” Spurrier told Bennett in February. “I have never thought a head coach should even make suggestions.  We have two men here very capable, (athletics director) Ray Tanner and (University president) Harris Pastides. The athletic director and the president, they make the call.”

Barring any unforeseen circumstances, we think Spurrier will continue to pace the Gamecock sidelines for the next two or three seasons.  He clearly hasn’t lost his competitive streak, he remains in excellent health and given his success over the last four years the job is obviously his for as long as he wants it.

There may be some adjustments on his coaching staff assuming the 2014 season continues its middling trajectory, but Spurrier isn’t going anywhere anytime soon.

As for his eventual replacement?  It’s clear Spurrier Jr. will be a big part of that conversation – and based on his success recruiting over the next few years, it’s also clear he will have a major impact in determining the trajectory of the program when that day does come.

We challenged Spurrier to win games and he responded.

Meh, I haven’t really seen much from Jr. that makes me think he’ll be a great Head Coach.

“…We challenged Spurrier to win games … and he responded…”

Overheard on the 3rd tee at Cobblestone:
“…hey Coach, you heard what Folks has been saying about you?”
“What folks?”
“Will Folks”
“Will folks what”
“No, that’s his name”
“Whose name?”
“Never mind, it wasn’t important…”

I challenged the world to keep spinning on it’s poles and it responded – still spinning isn’t it?

And Will writes about Sanfraud’s narcissism. Looks like Will was well taught.

I was about to slam these pompous celibates as you did, but you said it well enough. F__k em.

Why even do this. Focus on the state house crap going on. That is much more interesting than this crap.

As for SOS retiring, we will continue to coach for 6 more years so he can beat Bear’s all time SEC wins.

Politics gets very little readership when offered in FITS mundane, establishment like way. There’s a frenzy of coverage (over-exposed) because Harrell is a Republican in trouble. So there is nothing unique about it for FITS.

And Haley is routing the Democrats. So unless you present the side I explain on SCPSD -like no one else does- it’d difficult to pull hits on politics, especially with the FITS broken record, political whore angle. So it’s no wonder he’s trying to emulate SCPSD by offering something different. He still has a ways to go, though, to be as sharp as SCPSD.

lulz..”like no one else does”.

There’s a reason for that.

Holy shit, he did it again! are your number keys broken or the shift button?

FITS, do you ever get tire of 65% of your prose being the vomiting of tired, already-stale recitation of old information?

Tip to readers: I get Page Views at an astronomical level when I post about Gamecock football. I’m guessing why FITS is attempting this.

While I admit – the premise anyway – is WAY original for FITS…it is based in so much stupidity, that it discredits any idea he concludes with. Not to mention – I could not get to the end, because FITS was boring the H#!!! out of me (the reasons are earlier stated.) And he stated the conclusion in his headline.

Kudos for coming up with something new, FITS…but Zero on presentation, relevance or sound thinking.

Describes the SC Political Digest to a “Big T”

Hmm: I’m “Zero on presentation, relevance or sound thinking” yet the BEST you – and most of you ever can do – is use the words I create against me, because you’re too stupid, and devoid of thought, to ever come up w/ a clever definition yourself…..

Don’t get upset, Col. you’re one of about 10,000 incapable of articulating on the level I do. If you could do as well…THAT would be news.

You are a funny dude. And I don’t even think you mean to be. You really believe your own BS.

Dang!!! Give the boy sixth grade english comprehension and he thinks he’s Chaucer.

Hold on, just hold on a second. Did anyone else notice Big T actually made a complete post with out using any of his Hellen Keller typing words (#^^$(*@$^^@ %#$&#).
Did Hell Freeze over, or did I read it right? I don’t know, I feel kind of lost right now. Did someone hack his account? I am freaking out man!

about 10,000 [people in the world] incapable of articulating on the level I do.

Is ” Political Digest ” a sudo news outlet that spawns from fit’s ?

“We challenged Spurrier to win games … and he responded.”…if we could only buy Folks for what he’s worth and sell him for what he thinks he’s worth.

Nothing to see here. After reading this article, I have one overriding question: Why did I just read it? From what I can gather, SOS, Jr. hasn’t said anything about even wanting the job, and there’s no indication of SOS even wanting to move one.

The good ones want a path into the NFL. With instate Clemson, being in the SEC East, and all the nice facilities for USC athletes, recruiting should be the easy part. Players can get a degree or to the NFL from here. Set up a few football frat houses in that real nice corner walking distance from everything and watch the greats clamor to play here…under Steve Jr!

However, you have to earn it Steve Jr. Don’t tell us after the Swearinger-Holloman-Clowney-Thompson-Lattimore instate recruiting success there is no Parte Deaux. If you lose to KY, Auburn, TN, Fla, and Clemson this year, it becomes real hard to support a Spurrier Dynasty. Play some MAC teams, Big East teams even other ACC teams for recruiting and schedule strength. Go all in! Star recruiting power based on location and facilities should draw in South East recruits. Really, the premise of Steve Jr taking the helm has three seasons to materialize…starting right now. Good luck and get her done!

He’d be a better option that Skip Holtz!

I don’t know, Skip at least has been a head coach before.

He’d be a better option that Skip Holtz!

Jr. may want to at least look at being a head coach of a high school team before getting any idea of being an SEC head coach. His short stint as offensive coordinator was a a series of poor play calling and his old man had to step in and demoted him to a position coach.

In 2006, I gave my tickets on the 45 to my son, because I was to old to climb 16 steps in a gingerly manner. Thanks to Steve, I now have the best seats in WB.. the SEC Channel. He has brought our school to football greatness. This year sucks, so far, surely. But I don’t have to sweat or freeze to witness whatever happens. Again, thanks to Steve. But I think he learned a lot from Lou to know his son doesn’t have a rat’s chance to follow him. He WILL get a great letter of recommendation.

And no … this discussion has nothing to do with the fact the Gamecock football team is off to its worst start in six years, and unranked for the first time in four years. Or that this rapid descent was punctuated last weekend by an inexcusable 21-20 loss to Missouri in which the head ball coach’s legendary offensive genius seemed to be in short supply.

The wheels just fell off in Lexington.

Mike Dantonio is the man for SC when the HBC retires.