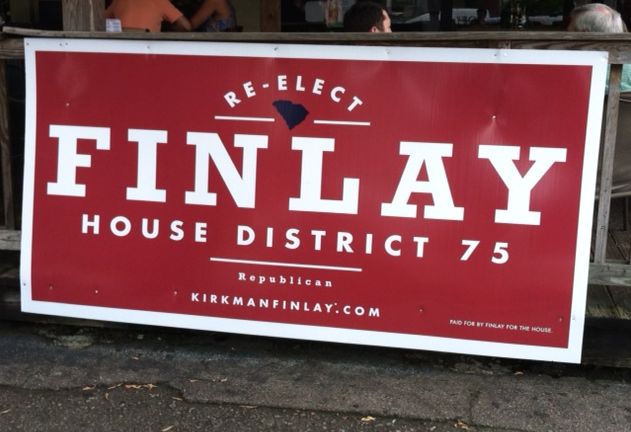 By FITSNEWS  ||  Reform-minded S.C. Rep. Kirkman Finlay (R-Columbia) is leading liberal trial lawyer Joe McCulloch by more than ten points in a rematch of their 2012 race for S.C. House District 75.

Wait … isn’t “reform-minded” a descriptor aimed at influencing your opinion on this race? Yes. It is. But it’s true. And isn’t “liberal trial lawyer” similarly a pejorative term aimed at swaying your view? Again, yes. It is. But also true.

And finally that polling margin is accurate … according to GOP and Democratic consultants who ran the surveys in the district.

See … here at FITS we’re all sorts of “unfair, imbalanced” (hence our motto).  But we back up our unfairness and imbalance with the truth.

And speaking of the truth, we’re reliably informed that McCulloch’s campaign has become exceedingly desperate in its effort to cut into Finlay’s margin.

According to our sources, a young political operative who goes by the name of “Eric” has been driving across this Columbia, S.C. district stealing and destroying Finlay’s political signs.  That’s illegal, people.  Political signs – while annoying – represent free speech when placed on private property with the consent of the property owner.

Unfortunately “Eric” did not follow the first rule of sign destruction:  Make sure no one is watching when you do it.

A farmer was working in his field just south of Williams-Brice stadium recently when he saw “Eric’s” black SUV pull up next to a Finlay sign.  “Eric” hopped out (as a female date waited inside his SUV) and began destroying a Finlay 4X8 sign – which is one of the larger political banners you see on roadsides.  The farmer approached “Eric” and asked him what he was doing – at which point the young man responded that he was being paid to do a job.

The farmer then inquired, “by whom?”

“I am not allowed to say,” Eric responded.

Given our long-standing contempt for McCulloch, we’re going to try a little market-based experiment.  If any of our readers have information related to the destruction of these signs – and if we are able to positively identify “Eric” based on that information – we will send the first one who communicates such information a check for $500.00.  And as is always the case at FITS … all sources will be kept confidential.

In addition to our journalistic interest, we’re told local solicitors may also be looking for “Eric.”

Again, we can’t stand political signs.  The fewer the better as far as we’re concerned … even if we’re talking about signs from elected officials like Finlay who are actually doing a good job of keeping the public trust.  Whatever we think of these visual abominations, rival operatives cannot go around destroying the lawfully placed signs of their opponents.

Anyway stay tuned … we have little doubt our expansive network of sources will turn up the information we’re seeking rather quickly.