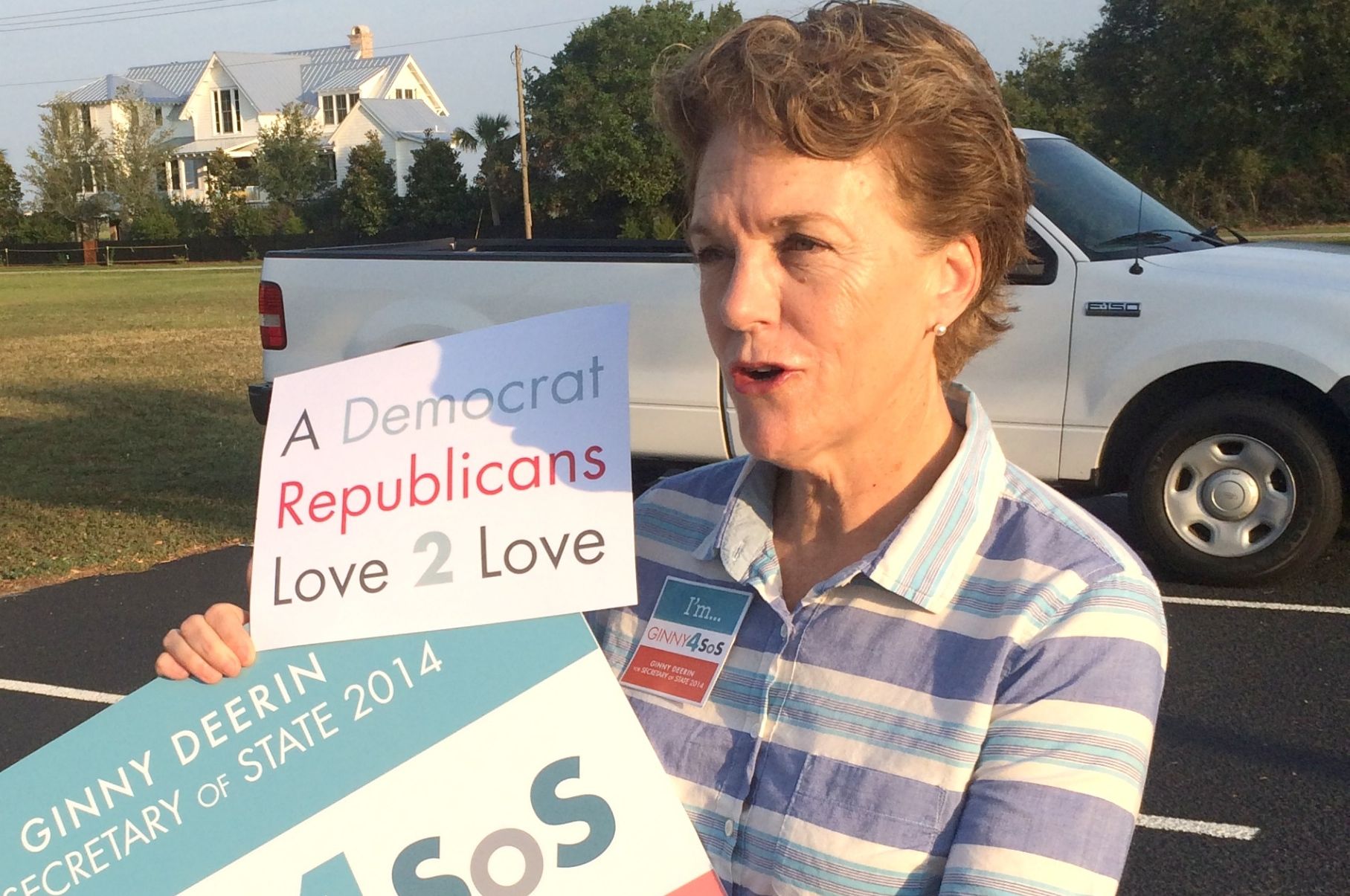 We don’t know much about S.C. Secretary of State candidate Ginny Deerin – other than she’s the first Democrat ever endorsed by the S.C. Club for Growth, a limited government group that has typically embraced fiscally conservative “Republican” candidates for elected office.

“We are endorsing Ginny Deerin for three reasons,” the group’s chairman said. “First, her plan to cut the budget, cut the fees and cut regulations in the Secretary of State’s office compellingly aligns with our commitment to fiscal conservatism.”

Obviously Deerin isn’t going to win.  She’s running as a Democrat in a state where enough people reflexively pull the “Republican” lever to deliver consistent victories to the GOP.

Wow … home girl has got some moves, although we’re guessing in a state like South Carolina Deerin’s support for equal rights is going to “move” voters out of her column.

That’s too bad … Deerin seems to be a much better choice for Secretary of State than the incumbent, “Republican” Mark Hammond.

Russia Is Ready To Rumble

I was waiting for that top button to pop off….

i was not impressed and I am not a straight republican voter. Saw nothing there to make me trust her, save playing to a safe crowd.

If she can convince more people to be gay, then certainly it will help slim the welfare rolls.

Hmm……..right off the bat, neither one of the candidates (Ginny or Mark Hammond…….we wonder if Mark Hammond has any relation to Hammond Academy) have any visual or vocal history on this website from what I can remember. Heck, I don’t remember any of their thoughts on the Post and Courier or any other newspaper in our state. That is a BIG signal that they are not thoughtfully transparent. A big red flag to any taxpayer…!

Since Hammond is a 12 year incumbent….I will be voting for Ginny. What has Mark Hammond done to get all Charity accounts online in real time for ALL to see …so that everyone can decide just how ethically fiscal the charities are..! If you are a charity and do not post your monthly checking account and balance statements for all financial dealings to a state website for accountability….you should not be a charity getting tax benefits…!!

In response to your last paragraph, if you want to see a charity’s financial data, visit citizenaudit.org. I don’t think real time financial data would prove beneficial when put through any cost-benefit analysis.
With regard to the current SOS and the efiling situation, there is actually a very wide array of online offerings at this very moment. I’ve actually filed several documents through SCBOS and UCC online with more than satisfactory results. Hammond’s my guy any day of the week.

+10 points and a copy of “Erin Brockovich”

…….step back and think….if Hammond is your guy; then where is he on FITSNEWS for all to see..?

Philip you appear to be very selective in your outrage and demands for REPUBLICAN Mark Hammond to be a regular on Fits and you question how “ethically ” financial and moral his charities are? You demand fiscal accountability for Mr.Hammond and slander his character in your request for information yet give self-identified loser Tom Ervin a pass on the way he is financing his campaign for governor.

I just figured a Paul Drake type like you that advocates for truth and the interests of the public would ask how poor Tom apparently turned his his $108,000 IRA/401k into several million dollars for his failed campaign? At one time he was spending as much as Haley and Sheheen combined and had only raised about $60,000 in campaign contributions!

What sayeth ya political hack for da dems? :-)

Is Tom Ervin not subject to the same disclosure requirements that the other candidates are? Has he failed to meet the requirements? What is your point exactly, and what evidence do you have that he hasn’t meet the law?

If he wants to spend money on his own campaign, how is that worse than whoring around for contributions, which is the norm?

You are the one asking the question about Ervin following the law.I have no evidence that he has not.
My point is that several months ago Ervin portrayed himself as a candidate that drained his $108,000 IRA/401-k(?) to run for governor as one of the working man common folk yet has apparently spent millions of dollars on a campaign that is not even being included in almost 100% of the polling data being conducted.

He can spend as much money as he wants.Just always wondered what is in it for him (if anything).He has zero % chance of winning and despite disagreeing with his politics seems to smart to piss away millions on a fantasy?

Riddle me this ….”dollar boy”…

(….”How does Dominos Pizza support the war effort by using 50% LOCAL energy in the Pizza empire financials…”)

If one only raises 60K in campaign loot then how do voters really KNOW the candidate is beholden to them instead of other interests…?

Philip can i suggest you go see a Dr. Never mind you are from the Low Country that explains all i need to know. Congrats on Congressman Sanfraud.

You can do so much better than this type of retort….

If you are from the Upstate……we appreciate your efforts in keeping Trey Gowdy focused with a Democrat on a Benghazi panel..!!

Ya know…Toyota…..we wonder how big a smile you would grin if this Secretary of State lady rode a Kawasaki to her inaugural …?

Trey is focused on his hair and Benghazi in that order….
I live in the home of Refrigerator Perry, James Brown, The last orginal Marlboro Man, The BomB Plant, and as of the last 5 years TO MANY BIG10 Natives.

LOL….you go Toyota……….ya know, I’m sure you can get some fresh chestnuts to roast for all your Big10 newbie neighbors…..

…Its a great day in South “Toyota” Carolina….

The SC Club for Growth has screwed the pooch on this endorsement. As I’ve said before Ginny Deerin is so far left of center she makes Hillary Clinton look like a tea partier.

I’ll bet Mark Hammond is shaking in his boots. LOL Mark is a decent guy doing a good job. No need to change that I see.

Tom Ervin supports this peverted lifestyle and state sanctioned gay marriage. Is that Tom in the Batman tank top? :-)

This place has officially just gone nutty. One look at that video tells you everything you need to know (especially when she had to read her notes to pull off the cheesy “Let people be….equala-teee” cheer. Holy wow…

They don’t want equality. They want extra rights that contributors don’t have. If she’s for that, she is the problem.

I like her! What have the damn Republicans done for this state?