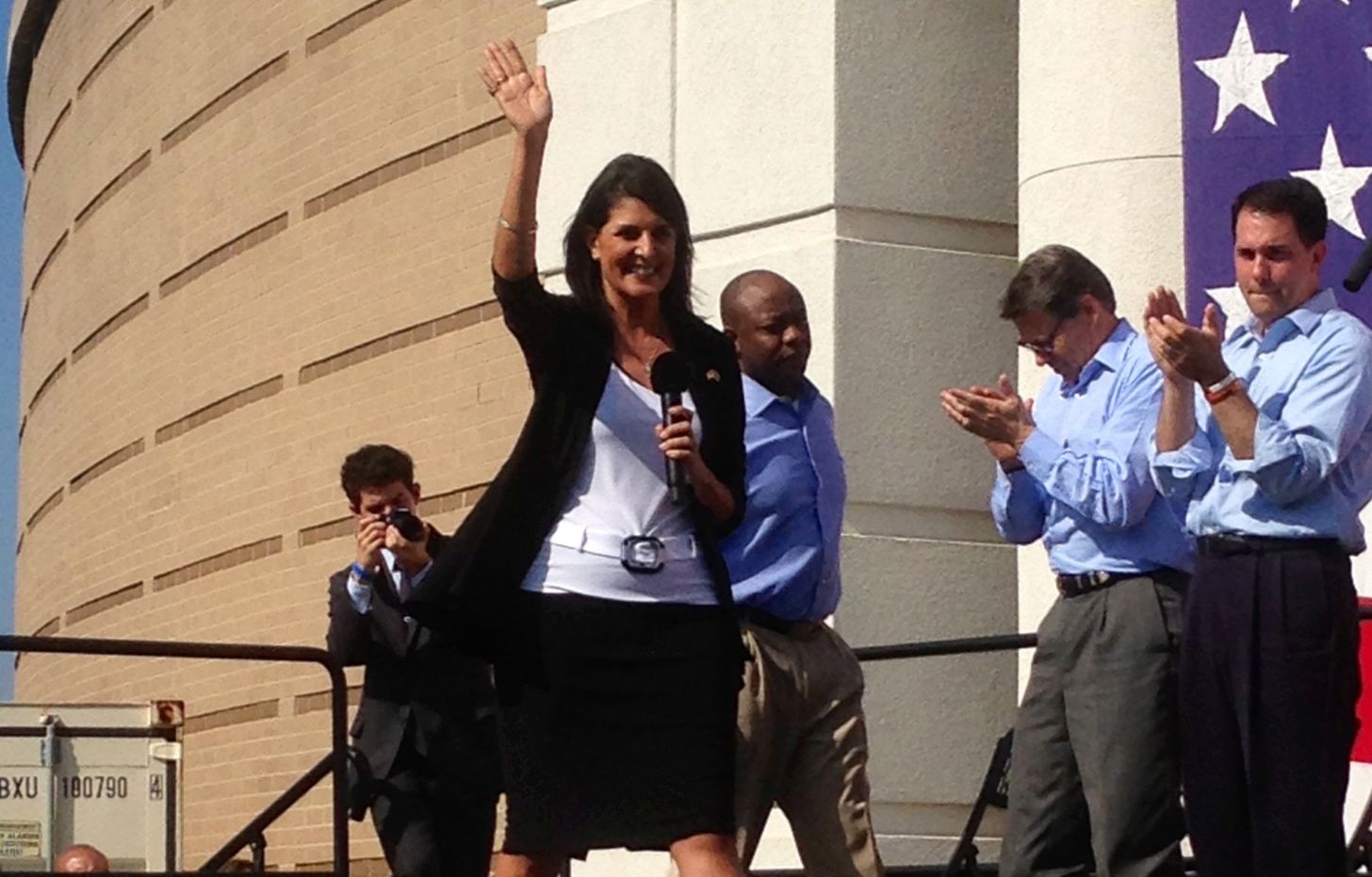 For the third straight month, South Carolina’s workforce remained at its lowest level in recorded history … further proof that the “economic miracle” touted by the Palmetto State’s “Jobs Governor” Nikki Haley is nothing but political fiction.

South Carolina’s labor participation rate for the month of May stood at 57.9 percent – same as it was in April and March.

That’s the fourth-worst figure in the country, almost five full percentage points below the national rate of 62.8 percent – which has been hovering at three-decade lows for the past few years.

When Haley took office, the state’s labor participation rate stood at 60.4 percent – but it has been falling precipitously ever since (despite a flood of “jobs” announcements purchased with hundreds of millions of taxpayer-funded incentives).

In addition to the diminutive size of the state’s workforce, there are also serious questions emerging about its skill … especially at the Boeing aircraft manufacturing facility in North Charleston, which is held out by Haley and others as the crown jewel of the state’s command economy.

Sources: Bobby Harrell Will Be Cleared

Mark Sanford And The Meaning Of Life

“It is hard to top what happened in South Carolina last week when Gov. Nikki Haley unveiled a string of significant projects that promise to bring more than 7,000 jobs to the Palmetto State.

In Chester County, Haley disclosed that Singapore-based Giti Tire, the 10th-largest tire company in the world, would build a manufacturing facility that could employ 1,700 people within a decade and produce up to 5 million tires a year during the first phase of production. The plant represents a $560 million investment.

Then two projects were unveiled in York County. First, the Lash Group announced a $90 million national headquarters that will employ 2,400 over the course of several years. The company works with healthcare providers and drug manufacturers to help patients get access to prescribed medications.

Second, LPL Financial announced it is building its new headquarters in Fort Mill where it will employ 3,000. The $150 million building is expected to be completed in 2016.

The math is huge. The three projects encompass 7,100 promised new jobs, and an $800 million total investment. If those projections are fully realized, these employers will help move this state’s economy forward.” (GreenvilleOnline)
Facts are a stubborn thing.

“Facts are a stubborn thing.”

The fact is that the SC Commerce department has a sketchy record of fulfillment of its press releases in both of terms of jobs and dollars invested, in fact, their pickled yet esteemed leader Bobby Hitt has publicly admitted they don’t follow up on the companies they announce as it would be, paraphrasing, a waste of taxpayer dollars….lol

Lash Group and LPL are just hopping the border, likely to take advantage of shit we’re handing them. Whether they stay or not is questionable. Also makes you wonder how many of those jobs will simply be people who move over to the new location.

EDIT: I should credit the Giti one a little in that it actually is a new plant, according to Giti’s website it will be the first plant in the US.

My old standby proves itself right, way more than wrong, take every government issued press release and believe the exact opposite and you will be much closer to the truth most of the time.

Uh huh, that is the smartest thought ever uttered by man!

hey… you know what? I have esp!!! when they ask me what color the card is, or which color the ball is going to fall in – I get the wrong one every single time. What are the odds?

Do you know that SC Taxpayers have to pay Giti $1,000 in tax credits for every person hired? They can hire, fire and rehire somebody else – $2,000. Only a fool would turn down a sweet deal like that – to the detriment of SC Residents.

Facts are a stubborn thing.

Not as stubborn as paid commenters.

Your line of faulty logic is that any job coming to SC is here because of Haley. That is false reasoning. Jobs were coming and going from SC long before Haley became Gov and will be doing so long after she is gone.

She is not the first to claim credit for the work of SC, her people and her taxpayers.Other Governors have done it.

I find it offensive that she takes credit for all good things, and none of the blame for bad things such as when jobs leave our state. It is greedy and dishonest of her to claim credit for what others have done. and for job OUR TAX DOLLARS have bought.

You also can’t have it both ways. Why blame Haley for people choosing to leave the labor market. For those in the labor market, unemployment is only 5.3%. That’s 1% below the national average.

She takes all credit, she should take all blame. Otherwise, Haley is playing a game that she CANNOT lose. And that is a game the voters should not allow.

Will she ever take responsibility for the failures of her hand-picked cabinet agency leaders? How many have resigned in shame or disgrace? SCDOT, SCDOR, SCDEW, DSS. Does she bear no responsibility for putting these people in charge?

How many millions has the data breach cost SC taxpayers thus far? How much will it cost in future year? As far as I know she has never accepted one iota of responsibility for this monumental failure? Where is the leadership?

FITS is the only stupid [email protected][email protected] outside the Union and Obama Administration praying (to his bust of Sanford) that a 777 crashes, so those ignorant F*#k$ can blame Nikki Haley…

When you and Sandi meet up for hot conservative sex, does your penis stick inside of her like a tongue sticks to a cold metal pole?

What the fuck dont you just use stationary from Haleys office to write your own letter to Fits. Praising your goddess….what a idiot.

… and I see lots of Hispanics with North Carolina automobile plates working on construction sites across the entire state. All, of course, getting 1099s instead of a employer paycheck. Hmmmmm?

If only they weren’t such good workers, and working so damn cheap… they won’t hire my lazy ass in construction… I want a 15 minute break every 2 hours and 30 minutes for lunch!

1099, the biggest corporate fraud ever perpetrated.
But you know what?
The state of South Carolina teaches this scam in it’s Small Business seminars.
great, ain’t it?
YOU BETCHA!
IT’s A GREAT DAY IN SOUTH CAROLINA!

Actually the the work force and employment numbers have both increased since Haley came into office. The problem is that the non military, non institutional population over 16 year old has grown faster. If fits reported the raw numbers you would see continuous growth.

Either people are moving to SC or more people are turning 16 than are dying. Possibly people are living longer and retiring in SC.

THE.DIRTY SECRET THAT LAWYERS, DOCTORS AND JUDGES DON’T WANTED YOU TO KNOW.
As bad as SC workforce participation rate is, West Virginia’s is twice bad. At 54.2% it is 10.6% blow the national average and 5.7% below the SC average.

The reason? Social Security disability fraud. In some areas 15% of the adult population is on disability according to 60 Minutes. Lawyers are having doctors sign medical reports that paralegals filled out. For denials they go before judges that have much higher approval rates.

Often they are claims for spinal or mental problems that are difficult to diagnose. They also submit claims soon after unemployment benefits run out.

South Carolina had one of the nation’s highest poverty rates in 2011, when nearly 19% of the population lived below the poverty line. It also had one of the nation’s lowest median annual household incomes, at just over $42,000. South Carolina not only had one of the nation’s highest average unemployment rates in 2011, but also one of the lowest labor force participation rate (unemployed workers actively seeking a job). Meanwhile, few other states had a larger percentage of workers receiving SSDI benefits, which does not require recipients to actively look for a job. State residents were among the most likely to attribute their disability to diseases affecting the musculoskeletal and circulatory systems, such as back pain. South Carolina residents were among the most likely to have high cholesterol or blood pressure, or to have been diagnosed with diabetes in 2012.
——————————————————–
This link is page 1 of a the article published in May. SC is on page 2.
Embedded link in article doesn’t work.

None of this should surprise anyone. The state is run by Republicans. In states run by Republicans, people are disproportionately poor, under-educated and have bad health. All things that increase the likelihood of disability. If you don’t believe me See

You need to read the article again. It’s about the South. The one statement about Republicans, is only about the South. There is no comparison in the article about states run by Republicans compared to Democratics. I have made the comparison and since Haley took office, only North Carolina’s Governorship has changed party. Since then Republican lead states have had more job growth.
The social safety net has not shrunk as article implies, but has increased as poverty has increased.

——-
Ifn we let more of them lazy bastards die so their friends can see it, that’ll get them off their butts back to work digging new potholes in our roads!

——–
Taxes made them folks poor.. Them po folk caint get no slack.. it’s a rigged game.. mah diction aint all that good, and we had to work when we was little, so ah caint reed, and I caint write… and my cypherin aint no good neither.

Ah work hard every day, and things never seem to get no better.. some libertarians were around yestiday.. they all told me I was poor cuz of them rich democrats taking all our Southern money to pay for sin… and them left wing liberals are racist, and keeping us po negro folk dependent, so’s we cain’t never get none a those good thangs we see them rich folk have, like shoes.

Remove the Ebonics and I’m in complete agreement.

Funny how all the jobs BOTTOMED OUT about the time Obama took office…and it has not gotten better in 6 years under him..despite the media telling us it was ALL GOOD just before the 2012 election…

Haley the corporate welfare queen lies again about jobs. Tax money is being used to bring low paying jobs for a few south carolina folks the rest are compnay employees just driving across the border. Wonder how much Haley is getting in campaign donations to pay these companies to relocate here? Hmmm time for some FOIA request to be sent over to her high school staff.

Of the 10 states with highest proportion of 18 to 64 year olds on Social Security disability, seven have among the lowest labor force participation rates in the country.
247Wallstreet 5/2011 data.

Which states are we talking about and what does that tell you?

See my comments below.

Mexicans are taking all the embedded software engineering jobs!

Will program Arm9’s for crack (either kind)