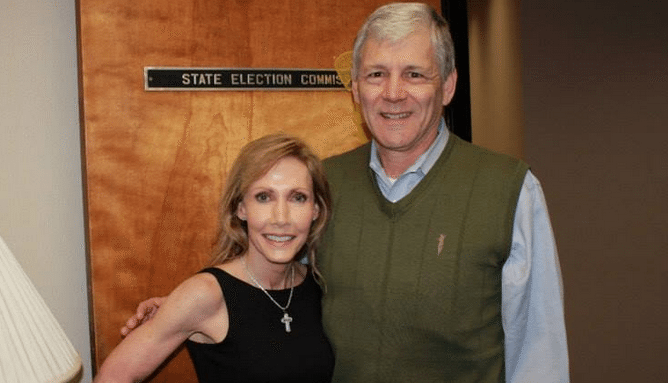 FITS has received the following statement from “independent Republican” petition candidate Tom Ervin in response to the SCGOP’s issuance of a letter instructing him to stop referring to himself as a Republican on the campaign trail in 2014.

“In her latest attempt to salvage her national political ambitions, the governor has now directed the state Republican Party staff to trample on the Bill of Rights, specifically the Right to Free Speech.

Using Chairman Moore’s ‘logic,’ voters who consider themselves Republicans — but don’t agree with the governor — are no longer Republican, or so says the governor through her intermediaries.

But, I have no quibble with Chairman Moore. He seems like a sincere young man who is simply carrying out orders from the governor. We all know that. In fact, I look forward to working with Matt — or his successor — as the next independent REPUBLICAN governor of South Carolina.

I was proud to vote in the Republican Primary in 2012, to host an event in my home for Mitt Romney, and I’m proud of the 2014 sustaining membership card in the South Carolina GOP I received from Chairman Moore.

Since I announced my candidacy, thousands of South Carolinians — including many Republicans — have joined our effort to restore integrity and honesty in Columbia. Why? Because we’re about offering common sense solutions to the problems plaguing our state. I wish the governor showed as much passion in protecting our vulnerable children who have been abandoned by the director of DSS, fixing our crumbling roads, reforming our tax code and giving parents more choice in the education of their children as she does in protecting her political future.

Oh, and I hope she joins me in opposing frivolous lawsuits.”

Don’t Believe The Spin: 2014 Not Settled

Lee Bright: Sotomayor Slips … And So Does Lindsey

Keep it up bitch

Ervin needs toooo cease and desist from all his damn whining while hiding behind his wife in all these pictures. Who is the candidate?
Ya quit the party loser.Enjoy your fundraisers with Pelosi and the other socialists in the democratic party you are now supporting.

I’m unaware that Ervin is “supporting” Pelosi.Tell us all about it wont you?

It’s typical for an establishment GOP maroon to trot out the Republicans’ boogeymen against their opponents to score cheap political points. I wonder if Haley can borrow that cardboard cutout of Nancy Pelosi from Mark Sanford?

Sure. A vote for Ervin is a vote for Pelosi, Reid and the dem/soc party and regime. He quit the republican party. Got mad and now apparently wants to get even. Dems will pour money into SC if they think gov can be defeated. In my opinion he is now working for the dem party.

Gee that sure explains everything.Thanks!

A vote for Ervin is a vote for Pelosi, Reid and the dem/soc party and regime.

You impress me with your level of ignorance.

Cato Institute has stated Obamacare IS just that,redistribution of wealth.
Keep firing away Smjerks. Deo Vendice loves your juice and vicupstate is always available for leftovers.

Sure, the establishment Dems. and Repubs. are scaredc to death someone will come in and upset the apple cart. Afraid the voters will wake up and see, what we have always done has gotten us where we are (in a mess). The same old tired, worn out rhetoric and faces run over and over for every office!

WE NEED SERIOUS CHANGES TO THE SYSTEM AND THE OLD WORN OUT PEOPLE WHO RUN IT!

Today (4-26-2014) I was told by some State employees who work for cabinet agencies, they were warned about signing petitions for Ervin.
I use to think this was a free country, with Constitutional rights!
Guess that all changed with Obama and Ohaley!

Matt was overheard saying that “she was driving him crazy!”

She drives me crazy too! And I don’t have to deal with her personally anymore!
Every cell in my body is glad to be out of there!

I bet in the end he out performs Nikki in the vote counting.

I was proud to vote in the Republican Primary in 2012, to host an event in my home for Mitt Romney, and I’m proud of the 2014 sustaining membership card in the South Carolina GOP I received from Chairman Moore.

Hilarious.I bet Charlie Crist hosted a few events as a REPUBLICAN GOV. Florida and carried a GOP membership card before he figured out he couldn’t defeat Rubio in the Republican Primary for an open senate seat and proceeded to not only run as an Independent but continues to try and destroy the state Republican Party as a democrat.
Sounds like Tom Ervin, does it not?Or it will soon be?A vote for this man,in my opinion, is a vote for Barak Obama and the Pelosi-Reid legislative agenda.

You were proud to support Mitt? I voted for him but felt ashamed that he was alternative to Obama.

Voting for Romney was almost as hard as voting for McCain. I had to go wash after that one.

I agree with you on McCain.Mitt? Other than Jesse Helms, I have never worked harder for a political candidate.
A man of honor and decency.He would have helped save the republic.

More like a man of undisclosed tax rates, offshore accounts, car elevators and the like.
By the way, you do know Jesse Helms was an unapologetic bigot don’t you?

Thank you for contributing, sir.You’re always ‘witty’ and I appreciate your candor on the subject of the day.

republicans are stoopid, give ya-self a break. McCain was the man VS GWB, but ya went w GWB. Imagine Cain VS 911? We would of been on top of the world. Ya blew it then, you blew now. In the future, you’ll blow it again, former republican.

One problem with Ohaley and some of the Republican establishment, they feel they own the State and “How dare anyone other than a Mute and Blind, brain dead Republican lemming run”!
If you are a brain dead Republican Zombie, you can lie, cheat, steal, violate the law, commit adultery and you will be accepted, elected and reelected.
IE:
Mark Sanford
Richard Eckstrom
Ken Ard
Bob Peeler
Harvey Peeler
Bobby Harrell
Jean Toal…OH never mind, she’s a Dem.(but they voted for her anyway)
Hugh Leatherman
Larry Martin
Ronnie Cromer
Joe Wilson

Oct 24, 2010 … A Florida Senate committee has recommended making it tougher for political … Charlie Crist’s bolt from the Republican Party to run as an …

I can’t hardly wait for the election. Nikki’s in for a big suprize!

Was she a feral child?

i liked his ad a lot more than the sick GOP ad saying anyone charged with a violent offense should be hung without trial.

Just like all the the times she’s called herself a Christian. What a loser.

Tom Ervin should brand himself as the Independent Cease-and-Desist Candidate. Worked for a sandwich shop.

Lawyer’s letter inspires Beaufort restaurant to change sandwich name
http://www.islandpacket.com/2014/04/23/3074449/after-letter-from-attorney-beaufort.html
[Excerpt]
Joe Fox insists that when he changed the name of one of his signature sandwiches to “The Cease-and-Desist,” he was only doing what a competitor’s attorney demanded.

But as a result, the owner of Carolina Dog and Deli on Ribaut Road says he is serving more sandwiches … with a side of Facebook commenting.

Whats the name of the attorney?

It appears the Ervin campaign has hired the Colbert-Busch advisors and communications team.Losers.

Is it just me or does the lady in the picture look in dire need of a large hot fudge sundae?

Tom’s wife, Kathryn Williams, is a very successful trial attorney or plaintiff’s lawyer in Greenville. She has served as the president of the Trial Lawyers organization and has been designated as a “Super Lawyer”.

Great. A judge and a trial attorney. They’ll be much different than the group currently running the state. lol

Trikki Nikki is worried now he knows she is going to make it hard for her to get re-elected now for sure.

Too bad Nikki has the sheep vote. If Ervin can beat his Bible in the upstate, maybe he can force a run off, but in the end she wins again. But what if he drives to Columbia and sleeps with Will Folks. Wouldn’t that improve his chances?

What runoff?Ervin is running as an Independent.The candidate that gets the most votes in the General Election wins ,whether its over Fifty Percent or not.

He’s an attorney. So is his wife. Have they gotten any child molesters off lately??? (Op Research, please)…

Remember: Sheheen said it’s a lawyers job to avert justice, if you’re slick enough to finagle it…and the client can pay the fee…

Republicons are doodoo in 14,LOL.

Last time I checked Haley was just Governor….and a lousy one at that. She is not lord of all creation….shout out to the Koch brothers you trying..

I can’t wait for the sheeeet.

Here is a link to the Super Lawyers biography of Tom Ervin’s wife:

Pretty well documented that Tom Ervin gave the allowable maximum of $10,000 to the South Carolina Democratic Party in 2004.
“Democrats aren’t apologizing for the big-dollar donors.

Individuals can give state parties as much as $10,000 under federal law and “we’re trying to max out all of our donors,” Ms. Macrina said. In August, two donors, Tom Ervin of Greenville and Martha Faucette of Columbia, gave the maximum.”

Ain’t no doubt Ervin is a Democrat and working with DNC to elect Sheheen, is there? I am confused on why he is apparently campaigning with that ugly , nasty , abortion loving bitch ,Nancy Pelosi, this early in the race .
That is Pelosi in the pics on FITS, correct?She is even wearing a ‘cross’-disgraceful.

You may hate Haley, but you are a F*#king Dumb@$$, trying to equate her w/ Obama. It makes you look ignorant.

Distancing herself from Obama has been the ONE Thing Haley has done better than anything else, besides raising money, based on her rejection of Obama…

I always enjoy your profanity laced diatribes and rantings!
Better to to thought a FOOL, than to open your mouth (print your ravings) and erase ALL doubt!!!!!
She is a liar, like Obama, incompetent like Obama, surrounds herself with loosres like you and Obama!
Now go take your valium laced laxative.

If you miss that, it is because you are likely a simple-minded idiot, who drinks in the media spin, instead of investigating and thinking for yourself.,…

You are correct. There are so many similarities between Obama and Haley that it is scary. The warning signs are there just like in 2012. People knew what would happen if Obama was elected, yet the sheeple voted for him, and now you get what you get. Same thing now. We know what we will get if Haley wins again. More embarsassment. And the effing moronic voters who make up our electorate will do it again. Have at it, dumbasses.

The fact that you believe all this shows your low IQ, especially when it comes to politics. You cannot think for yourself…you are so easliy swayed by the Limbaughs and Hannity’s, and the extremely low minor league hacks who pass for conservative media in South Carolina.
Union take-over of our jobs? Come on, seriously? In South Carolina, that’s going to happen and she is the champion? But low information dolts such as yourself will swallow whatever is spoon fed to you.
So you vote for her, because remember, YOU benefitted from having your finanical information stolen. YOU have made that a virtue. And you claim to love SC, but allow Haley and the rest of them to keep us at the bottom. Well good for you…you will rot at the bottom.

so does independent RINO yet have the petition signatures or does the ad campaign figure into your John Hancock’s wanted so we don’t have to rely on ACORN tactics?

They can’t sue for this. I mean, they can, but they won’t win. http://www.thebryancrabtreeshow.com/well-sue-you-says-the-gop-to-ervin/