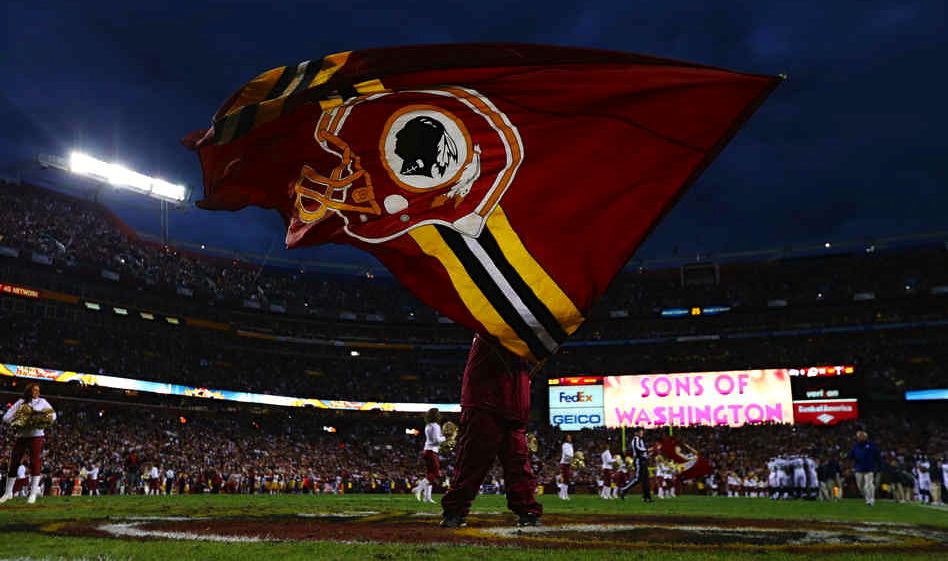 U.S. President Barack Obama took time away from the debate over a partial government shutdown to play politically correct policeman for the National Football League.

Saying the Washington Redskins’ team name was offensive to “a sizable group of people,” Obama told the Associated Press if he owned the team he would “think about changing” it.

“I don’t know whether our attachment to a particular name should override the real legitimate concerns that people have about these things,” Obama said.

“I don’t want to detract from the wonderful Redskins fans that are here,” he added in a sop. “They love their team and rightly so.”

What’s offensive to a sizable group of people isn’t the Redskins’ team name – its the team’s piss-poor on-field performance. After winning the Super Bowl following the 1991 season, the Redskins have posted just three-ten win seasons. They’ve also had fourteen losing seasons in their last 21 years – and are off to a 1-3 start this year.

Also offensive? Politicians like Obama butting their noses in where they don’t belong …

Redskins’ owner Daniel Snyder has vowed he will not change the team’s name – and polling shows that 80 percent of Americans support the team keeping its name.

Assuming Obama and the P.C. police are able to force the Redskins’ franchise to change its name – it wouldn’t be the first time a sports team in our nation’s capital has bowed to the pressure. In 1997 the Washington Bullets of the National Basketball Association (NBA) became the Washington Wizards – citing the District of Columbia’s high murder rate as one of the reasons for the name change.

Well, it is . . . so why should he not say that it is?
(Note to FITS – perhaps if you were American Indian you might understand – I know you do not posses empathy so I guess the point will be lost on you . . .)

Educate yourself, DumbAss. Do a little search of American Indian and see what you find, DumbAss! Hey – and FU, too!

SC Blues has it right. It is mainly well-meaning but clueless white liberals who insist on “Native American” rather than “American Indian.” Fact is we are ALL native Americans if we live here. The ancients, the elders, had no concept of major differences due to race. If you were white or black and married into the tribe or were adopted into it, you were the people of the tribe, period. Entirely up to the Chief, Council and will of the people. Government politicians, administers and the slave owners/sellers imposed all the racial lines and bullshit rules.

Hey dipshit, do you really think a teams name is a core function of government?

A core function of government?? Are you an imbecile or what, DumbAss?

The offensive part might be how the US government royally fucked over the “redskins” many many years ago, TBH. Team names hardly means shit compared to the Trail of Tears.

Still, I agree that Blackskins or Whiteskins would be called out. Society is kind of odd that way.

Society is FUCKED that way. lol

He should learn his day job first. Then he can branch out to more esoteric matters.

Chargers should be banned because its sensitive to people with spending problems. Texans for people of Mexican descent. Notre Dame for peace loving Irish people and of course the gamecocks because it promotes animal cruelty

Saints….. Offensive to non-Christians
Steelers…Offensive to thieves who are also poor spellers
Packers….Offensive to Lindsey Graham

Is it possible to be offended at being called a Viking? Just seems too badass to be a bad stereotype.

Racist! They are only badass because they are white you cracker!

— and then there was the baseball team that signed a two-headed gorilla as a pitcher……..

TBG – It’s embarrassing but the craziest thing happened. I meant to edit it when I could remember how it went, but I forgot the rest of the joke. It must be funny because I’m laughing now!

It’s now trending back towards “Afro-Americans”. I’ve been told.

Buck then could rename the team to Washington Sodomites

There first round draft pick has already been announced

Obama just proved opinions are like assholes every one has one.

Let Native Americans complain about it if they want. Doesn’t seem to bother most.

“Redskin” is an offensive accolade. The complainants are of Native American heritage. Being part Cheyenne, the accolade is insensitive if not racist. Just another consistent anachronism in America, like the best blow jobs come from Detroit knavettes. Be careful, still some savage in me. Old fashioned Cheyenne Resistance is just a few beers away. Stopped drinking fire water in 1998, could cause a relapse…and you do not want that.

BTW, Obama forgot to barricade 200 Federal Airspace milee, by act of Congress, is above our heads. Gotta give him credit though. He did order the National Park Service forbid charter boat captains in Florida from boating on Florida Bay as it was now “closed” due to the shutdown.

Obama is a chump.

Odd, we assumed you pretty much “like” the whole “thing”.

well,you’re correct,but ‘intact’ guys hold a special place in my heart.circumcision is barbaric

I’m starting to get the distinct impression that you would suck a dick. Am I reading too much into your remarks?

People have called me all sorts of names,but once I suck their dick,they just call me…

Obama’s comment “if I was the team’s owner”, last time I checked, someone who has always existed off of government jobs and never worked in the private sector could never afford to own an Professional sports franchise, including the WNBA.

This truly show’s how clueless he is. What a dumbass!!!!

You what is a REALLY offensive name… The Washington Senators, now that’s offensive

I find it offensive that the government commands me to catagorize my race…how insulting!

It always has, but it started with the crown, before the revolution. And the truth to all the shit about wiping out Indians because they killed, scalped and raped “white people” is as bogus as it can be. Go back and look at the events of the Indian wars, of Bacon’s Rebellion and the fight for Fort Christiani. Both sides in the Revolution used Indians to fight for them, and sometimes “free blacks” joined in, and mixed-race “white Indians” and “black Indians” and so-called “tri-racial isolates” as well. Half the people in Horry County today, whatever race they claim, are the heir to the diaspora after Bacon’s Rebellion, as are the Melungeons, the Lumbee, etc.

All y’all who think you are white can only show “proof” of that by white
skin, straight hair, blue eyes etc., which exist by selective breeding
adopted as a survival strategy when the fucking government of the US,
the states, etc., were either condemning all who claimed to be Indian or
looked it to either slavery, perpetual indentured servitude, economic ruination or death.

Many of y’all who think you are white can only show “proof” of that by white
skin, straight hair, blue eyes etc., which exist due to selective breeding
adopted as a survival strategy when the fucking government of the US,
the states, etc., were condemning all who claimed to be Indian or
looked it to either slavery, perpetual indentured servitude, and economic ruination or death.Nice chioces, huh? Might as well be some white people! Now, OBMANA, if he wants to make a difference, would address ALL of that, say the government fucked up, we all just people, bet over it — and stop carrying water for some whiny-ass rez Indians who are tilting at windmills.

To a great many Indians, the term “redskins” is the same as “niggers.” It just is. But nobody much gives a shit because the establishment has made Indians into a joke. The official government and society line is that Indians are all either dead or living on reservations in 3rd world conditions or living the high life of hookers and blow with casino proceeds. As a person of substantial American Indian descent who (despite being “raised white”) I see race as kind of a cruel joke. Most of us who live in the Southeast with families that go back past, the end of the 18th Century have “native blood.” Many who believe themselves to be pure white have a touch of African blood as well. (Woodpile, back door man, you know how it went) “Blood quantum”, “one drop rule”, Afrocentrism and all of that is bullshit, and in general race itself is bullshit, just another way to divide us. >>>>>

“Redskins”, to be precise, is more offensive than “Braves” or “Indians” as a team name. Just as “Brass Ankle” is more offensive than “Redbone.” And for God’s sake, Obama is the worst person to be weighing in on this, it just fires up people who want to draw that line and not even consider a name change for the team. But in my opinion, as a “non-rez ‘white Indian’ from a currently non-federally-recognized tribe, there are FAR more pressing problems among the Indian population in general what what some stinkin’ ball franchise calls their team. In other words, I just don’t much give a shit.