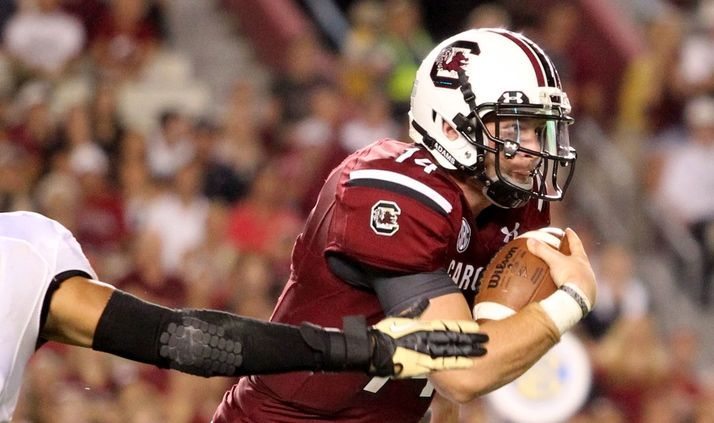 It’s been a rough year for our founding editor when it comes to picking college football games … although we hope October will be the month he hits his stride.

This weekend he’s coming in under the Las Vegas line for the University of South Carolina’s SEC East showdown against Kentucky. Odds makers have the No. 12/13 Gamecocks (3-1, 1-1 SEC) favored by three touchdowns at home over the Wildcats (1-3, 0-1 SEC) – who are in their first season under former Florida State defensive coordinator Mark Stoops.

We think that’s a little bit excessive … although not by much.

For starters, Kentucky’s defense is no joke. Senior linebacker Avery Williamson is the leading tackler in the SEC this year (42 stops) while junior defensive end Za’Darius Smith – a 6-foot-6, 254-pound transfer from East Mississippi Community College – is second in the conference with 4.5 sacks.

Offensively, Kentucky isn’t as good. The Wildcats rotate two quarterbacks – Maxwell Smith and Jalen Whitlow – while relying on freshman running back Jojo Kemp (who is averaging 8.9 yards a carry) for a pop out of the backfield.

The big storyline of this game is Shaw – and whether he should be starting after injuring his shoulder during USC’s sloppy win over Central Florida last week. South Carolina has the luxury of having an experienced backup quarterback in junior Dylan Thompson – who has won both of his career starts and played well in back-up duty for Spurrier’s offense.

We polled the question and 73 percent of our readers said Shaw should sit out this game compared to only 27 percent who felt he should start.

Obviously Shaw has been cleared to play medically – and there’s no doubting his competitiveness. Also, Shaw is tied for second all-time on South Carolina’s career wins list (20), tied for fourth in career touchdown passes (38) and ranks ninth all-time in passing yardage (4,292).

He’s not going to want to miss a chance to move up in those categories as he continues to make his mark on a resurgent Gamecock program.

Will The Real Jadeveon Clowney Please Stand Up?

The Magik Round Dice roll out to—–

Rumor has it Clowney is suffering from menstrual cramps today. The doctors have given him a Midol and told him that he was pretty.

I heard he has an ass pimple that will only allow him to stand around a lot with his hands on his hips.

His period is so bad that he couldn’t dress tonight. It’s clear that he’s already punched his NFL ticket. Might as well sit him the rest of the year, all he’s doing at this point is waiting for his draft pick, I hope the NFL teams are watching and picking up on this… “With their 3rd round pick, the Jacksonville Jaguars pick Jadaveon Clowney”.

HAH! —– you did get it closer for KY! The 4th quarter screwed it up for me…

The Magik Round Dice roll out to—–

Not bad dude; not bad at all…

mmm mmm! Big win for the Old Ball Coach! Not!