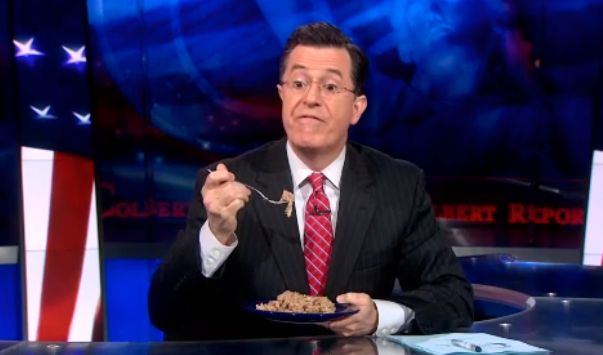 How is he taking her surprisingly lopsided loss?

“I gotta tell you, tonight I am angry, and for once that doesn’t make me happy,” the South Carolina native said on his show, The Colbert Report. “And I think you know why. My sister lost!”

“How could this have happened?” Colbert wondered aloud. “I was so sure Lulu had won because CNN called it for Sanford. But the voters – what can I say – the voters of South Carolina have spoken. Mark Sanford beat my sister. And I believe that means Mark Sanford is now my sister. And on behalf of my entire family I want to say we’re deeply sorry about him – now I know how Kevin Manson must have felt.”

Colbert goes on to say he “feels so betrayed by South Carolina” and that if the Palmetto State is going to turn its back on his family – he’s going to turn his back “on them.”

“From now on – and I never thought I would ever say this – I am from North Carolina,” he says. “I’m a Tar Heel now – whatever the fuck that means.”

The comedian then thumbs through a North Carolina fact book to acquaint himself with his new state’s symbols – including the state bird: The Cardinal.

“That’s a stupid bird, but it’s mine now and I love it as much as our state dog … the, uhhhhh, Plott hound,” he jokes.

“Most shockingly I will now no longer enjoy South Carolina’s tangy, savory, juicy, and deeply delicious barbecue made with our unique mustard-based sauce,” he says.  “Now I officially love North Carolina’s sauceless vinger-based meat product that they call barbecue.”

Colbert also uses his routine to poke fun at the dirty politics that played a role in his sister’s defeat.

“I saw firsthand how her opponent smeared her with outrageous accusations that I knew to be untrue,” he said. “And that has made me wonder if other campaigns have done this as well.”

“I mean, is it possible that John McCain doesn’t have an illegitimate black child?” Colbert continues. “And does that mean Meghan McCain is white? I don’t know what to believe anymore!”

Lots of people were wondering how Colbert would respond to his sister’s defeat, and we gotta say … dude hit it out of the park. Also it’s worth noting that Colbert-Busch’s defeat isn’t necessarily bad news for the comedian.

After all, he’s got Mark Sanford providing his show with regular material again …