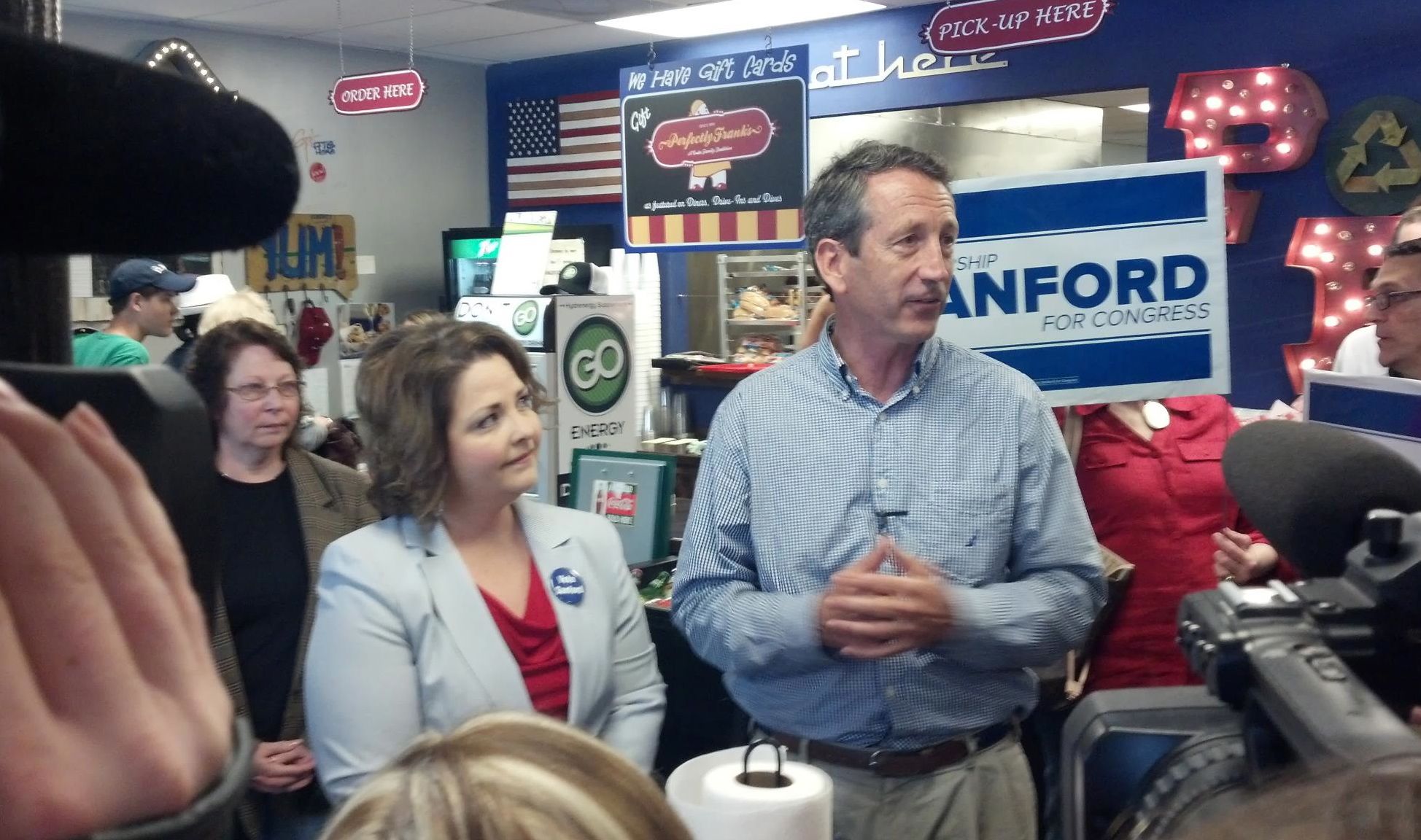 We’ve read (and written) plenty of bizarre Mark Sanford stories over the years, but a report filed this week by NBC News hottie Ali Weinberg is a worthy addition to the collection of crazy.

Weinberg attended a campaign “meet and greet” scheduled by Sanford’s campaign at some “ha ha funny” named hot dog joint in Summerville, S.C. (it’s called ‘Perfectly Frank’s‘ for those of you who care).

Wait … why is a national NBC reporter covering a Sanford “meet and greet” at a funny-named hot dog joint? Well, the former “Luv Gov” is one day away from pulling off one of the more remarkable political comebacks in American political history (assuming he can squeak by Democrat Elizabeth Colbert-Busch in a tight race for the Palmetto State’s first congressional district).

Anyway … Sanford has (not surprisingly) been dogged by problems with female voters, especially after his ex-wife Jenny Sanford – who still polls very well within the first district – accused him of habitually trespassing on her property in violation of the couple’s 2010 divorce decree. Naturally that dust-up reminded female voters of Sanford’s infamous 2009 scandal – when he was busted lying to his family, staff and state about his whereabouts (he was in Argentina knocking boots with his then-lover, now fiancée Maria Belen Chapur).

Sanford – desperate to prove he still had some mojo with female voters – took Weinberg on a little trip to find women who “hated” him.

“Let’s go to this woman – does she look biased?” (Sanford) asked as he crossed the street, the NBC reporter walking next to him …

… after Sanford caught up with the woman he had pointed out, she told him she was a big supporter and that she would be making phone calls for him on Tuesday.

A staffer, mimicking Sanford’s tongue-in-cheek approach, suggested that the woman had been planted.

A few shops down, he stopped in a women’s consignment store to chat with two shoppers who were visiting South Carolina from Arkansas, but who had seen some of his campaign ads and signs, which they said were “beautiful.”

“You look like you’re totally capable and we wish you luck,” one of the women told him.

Laughing, Sanford pointed to the two cameras in front of him, saying, “you hear that?”

Wow … talk about a politician who is desperate to feel the love. Any love.

Sanford and Weinberg’s informal “canvas” continued … although no haters were uncovered (the two eventually encountered a woman who said she disagreed with Sanford’s personal conduct, but still supported him ideologically).

“I can honestly say that I have never heard of a candidate approaching voters and asking them if they hate him,” Jason Easley of Politicus USA noted. “Sanford is exhibiting some emotionally disturbing behavior.”

This website endorsed Sanford (unenthusiastically) in the GOP runoff against a fiscally liberal “Republican.” And we had planned on endorsing him in this race against Colbert-Busch. However his shameless efforts to “run to the middle” in a recent debate were too much for us.

Which is why we’re officially sitting this one out …

Do we still think Sanford will be a better vote on fiscal issues than Colbert-Busch? Yes … absolutely. But Sanford’s all-consuming desire to be liked by everyone (and to be right on every issue) is a dangerous quality. Should he win on Tuesday, we would strongly advise Sanford to check such childish self-indulgence at the door and focus on voting the way he did during his first stint in Washington from 1995-2001.

SC-1: WTF Are They Doing Here?