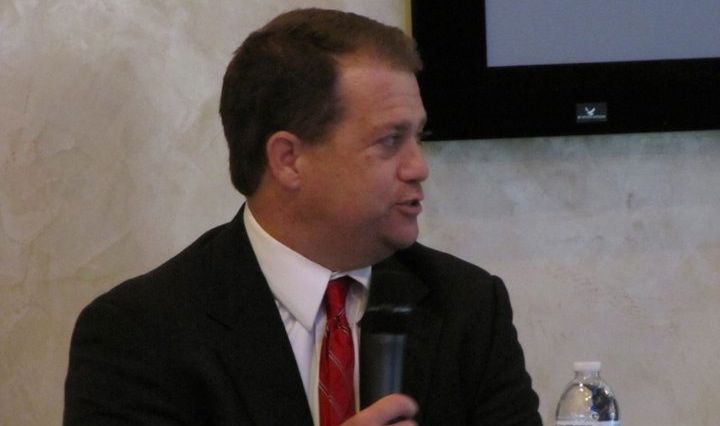 God told S.C. Sen. Lee Bright (R-Spartanburg) to run for the U.S. Senate … according to Lee Bright.  And now, Lee Bright is close to giving God his “final answer.”

Bright tells The Politico he is “leaning heavily” toward announcing his candidacy against liberal U.S. Sen. Lindsey Graham in the 2014 GOP primary for Graham’s seat – and that a decision will be made within the next three weeks.

Of course FITS readers already know what Bright’s decision is … he’s running against Graham. No doubt about it.

The question? Whether this fiscal and (rabidly) social conservative lawmaker will emerge as a credible opponent – or whether anti-Graham interests will gravitate toward another candidate.

As this website has noted on numerous occasions Bright has a rock-solid record when it comes to protecting our tax dollars. Which is good. Of course he’s also one of the more sanctimonious members of the S.C. General Assembly – routinely seeking new ways to legislate his Judeo-Christian morality. Which is bad.

Plus Bright is … how do we put this delicately … not that “bright.”

Well, S.C. Sen. Tom Davis – long considered the runaway favorite in the anti-Graham derby – is reportedly reconsidering his previously announced decision not to run for the U.S. Senate in 2014. If he decides to jump into the race, odds are he would be the most credible candidate.

Davis is every bit as fiscally conservative as Bright – except without all the far right social rhetoric. He’s also got a firmer grasp of policy and is much quicker on his feet than Bright.

Meanwhile Nancy Mace – a FITS co-owner and the first woman to graduate from The Citadel – is reportedly being courted by allies of former U.S. Rep. Ron Paul.

Mace stoked speculation about her possible interest in the seat with a recent appearance on nationally syndicated radio host Laura Ingraham’s show.

Graham may also face a challenge from openly gay Spartanburg, S.C. resident Bruce Carroll, who helped found the group GOProud. Given the persistent rumors surrounding Graham’s own sexuality, that could make for an interesting dynamic in the upcoming campaign.

Can any of these candidates knock off Graham? It won’t be easy. The fiscal liberal from Seneca, S.C. will have a mountain of money to fend off attacks and will also benefit from the fact South Carolina’s primary will be open to Democratic crossover voters.

Still, Graham’s recent assault on U.S. Sen. Rand Paul (R-Kentucky) for the latter’s impassioned defense of liberty has rubbed many South Carolina Republicans (even the establishment ones) the wrong way.

So … will it be a tipping point for GOP voters who were already frustrated with Graham over his many previous betrayals of conservative ideology?