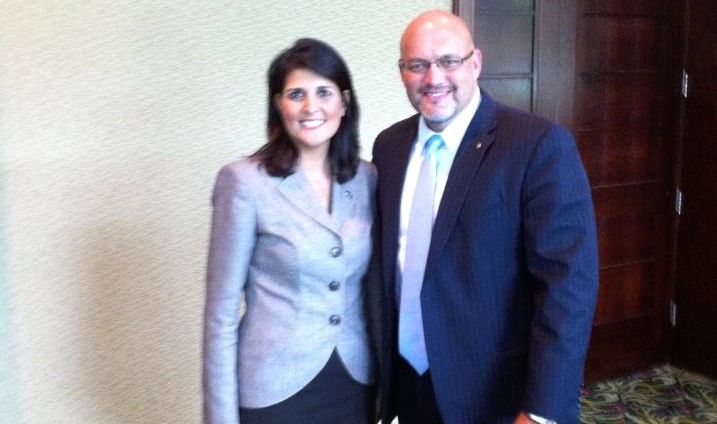 In a bid to freeze out any GOP primary opposition for her upcoming 2014 reelection bid, S.C. Gov. Nikki Haley rolled out a “grassroots steering committee” which included 164 Palmetto State Republican activists earlier this week.

“Governor Haley has made clear that she will wait until the summer before deciding whether to run for re-election,” a release from her campaign noted. “However, she has instructed our team to get prepared in the event that she does run. Today, we are releasing the names of those who have generously agreed to serve on the Haley Grassroots Steering Committee.”

Among those names? Charleston, S.C. funeral home director and Republican Party activist Mark M. Smith – who is president of the East Cooper Republican Club (one of numerous “there but for the grace of God go you” GOP groups which gather monthly to fluff establishment politicians).

But unlike the other names on the governor’s list, Smith is much more than just a political asset to Haley …

The married father of three was Haley’s high school sweetheart in Bamberg, S.C. during the late 1980s/ early 1990s – as well as her on-again, off-again lover for an extended period of time thereafter.

When did the relationship end?

Who says it’s over, people …

FITS has recently obtained information indicating Haley and Smith remain in close contact (and not always about politics) – info which has been confirmed by those close to Smith.

“He talks to ‘Nikki’ all the time,” one East Cooper Republican tells FITS. “They’re very familiar – and when you talk to him he definitely lets you know she isn’t the governor to him and he isn’t just some party guy to her.”

Haley married her husband William in 1996 (after he agreed to change his name to Michael). The governor – who was accused of having a pair of extramarital affairs during the 2010 Republican gubernatorial primary – has issued a blanket denial against allegations of infidelity, claiming to have been “100 percent faithful” to her husband for the duration of their marriage. Not only that she’s vowed to resign her office if proof of an extramarital affair ever surfaces.

Meanwhile Smith – who brands himself as a devout family values conservative – was dogged by allegations of extramarital affairs during his failed bid to capture a city council seat in Mount Pleasant, S.C.

Haley may soon get a chance to set the record straight regarding her past lovers. Earlier this month Haley was referenced as the “other woman” in a pending divorce trial. And while we don’t expect her to be hauled into court (governors are exempted from that sort of thing) we do expect an effort to be made to depose her – at which point Haley has some serious decision making to do.

Do we care at this point whether Haley ever comes clean? Or ever gets busted?

Not really … we’re more focused on her policy positions these days than her sexual ones. Still it’s always fun to check in on what “Naughty Nikki the Insatiable Governess” has been up to.