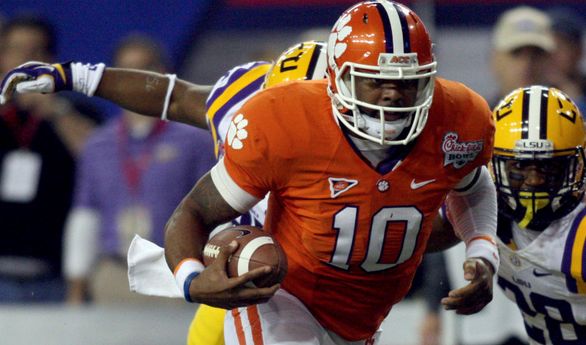 You can put those “West Virginia scored again” jokes on ice … and silence at least some of the dismissive talk about the Atlantic Coast Conference.

Clemson University overcame a double-digit deficit in the fourth quarter to knock off eighth-ranked Louisiana State on New Year’s Eve – grinding out a gutsy, signature win over one of the powerful Southeastern Conference’s elite programs in the 2012 Chick-fil-A Bowl.  To pull off this improbable 25-24 upset, Clemson’s much-maligned defense had to make a pair of critical fourth quarter stops against the Bayou Bengals.  Meanwhile its offense had to convert a long fourth down play against one of the nation’s top defenses just to give second team All-ACC kicker Chandler Catanzaro his shot at a 37-yard game winner.

They did … and Catanzaro split the uprights with his kick (even after LSU tried to “ice” him).

“We grew up tonight,” Clemson head coach Dabo Swinney said, savoring perhaps the biggest win in his five-year Clemson career. “I’ve been telling them ‘you’re at the doorway of greatness,’ sooner or later you gotta step through the door.” 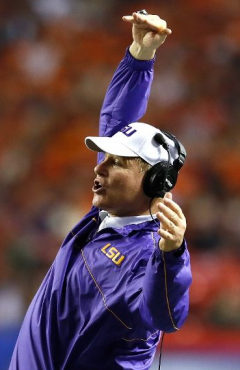 With the upset No. 14 Clemson (11-2, 7-1 ACC) earned a healthy dose of national respect as well as the program’s first 11-win season since 1981 (and fourth in program history).  The Tigers also staked their claim to a Top Ten finish – which would be their first in more than two decades.

Meanwhile LSU (10-3, 6-2 SEC) lost to an ACC opponent for the first time since 1955 – and lost a non-conference game for only the second time under head coach Les Miles.

Miles – whose team was playing for the national title a year ago – found himself on the receiving end of some stinging criticism from LSU fans when his team’s usually conservative, run-happy offense inexplicably called three passing plays on its last drive of the game.  Clinging to a 24-22 lead, LSU needed just one first down on its final possession to put the game on ice.  Why, then, did Miles call three passing plays in a row – stopping the clock and enabling Clemson to preserve all three of its timeouts?

That was the burning question in Baton Rouge, Louisiana as 2012 ticked into 2013 … a question Miles has yet to satisfactorily answer, by the way.

Playing without All-American wide receiver Sammy Watkins – who was knocked out of the game on the Tigers second play from scrimmage – Clemson’s offense was forced to rely almost exclusively on 2012 ACC Player of the Year Tajh Boyd.  And did Boyd ever respond – turning in one of the grittiest, most courageous performances we’ve ever seen from a college quarterback.

Boyd completed 36 of 50 passes for 346 yards and a pair of touchdowns – including a 12-yard strike to wide receiver DeAndre Hopkins with just under three minutes left in the game that brought Clemson within two points.  The 6-foot-1, 225-pound junior also ran 29 times for 22 yards – including an 11-yard touchdown run which answered an early LSU score.

But Boyd’s stats weren’t what was so inspiring- it was the heart he showed.  Pounded relentlessly all night by LSU’s nationally renowned defense, Boyd kept picking himself up off the Georgia Dome turf to rally Clemson in critical situations.  And it was invariably Hopkins on the receiving end of his passes when he did.  The speedy 6-foot-1, 200-pound junior receiver set a Chick-fil-A Bowl record with 191 receiving yards on 13 catches – including a pair of scores.

None of Hopkins’ catches was more critical than the 26-yard pass he hauled in from Boyd on fourth-and-sixteen with less than a minute-and-a-half on the clock – a clutch reception that kept Clemson’s game-winning drive alive.

Every bit as impressive as Clemson’s last second offensive heroics was the effort turned in by its unheralded defense.  First-year coordinator Brent Venables’ unit sacked LSU quarterback Zach Mettenberger six times (3.5 of which came courtesy of senior defensive end Malliciah Goodman) and picked him off once.  More importantly, Clemson’s “D” forced eight three-and-outs – including stops on the Tigers’ final three possessions of the game.

Courtesy of the ACC Digital Network, here are some Chick-fil-A Bowl highlights …