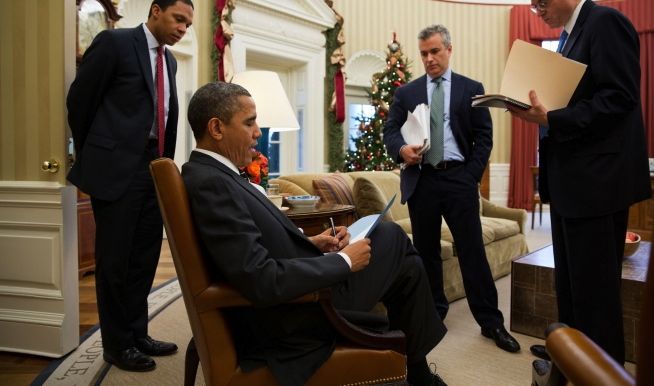 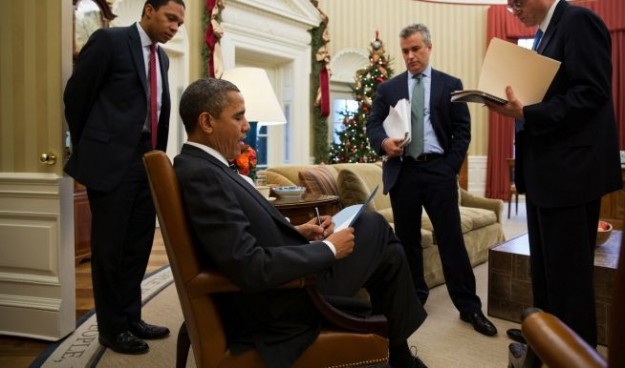 U.S. President Barack Obama is returning to Washington, D.C. this week from his latest Hawaiian vacation – purportedly to try and avert a plunge over the so-called “fiscal cliff.”

Wait … doesn’t Obama want the country to go over the cliff?  Absolutely … which means he’s really returning to manage the “blame game” associated with this latest high stakes political drama.

For those of you who haven’t been following this goat show, tax cuts passed in 2001 and 2003 are expiring on December 31.  There’s also a $109 billion spending cut set to go in effect as part of a 2011 deal to raise the federal government’s debt limit to its current level of $16.4 trillion.  Not surprisingly, neither Democrats nor “Republicans” want to see that $109 billion cut take effect.  Yet as they keep the gravy train flowing, both parties also want to give the impression that they are serious about reducing the government’s skyrocketing debt – even though deficit spending will climb by at least $7.7 trillion over the coming decade no matter what deal is struck on the “cliff.”

Against this backdrop Obama initially proposed $1.6 trillion in tax hikes over the coming decade – the vast majority of which would go to fund government growth.  “Republicans” in the U.S. Congress countered with an $800 billion tax hike proposal – and have since upped their tax hike plan to $1 trillion.

Obama has rejected both of those proposals – while at the same time insisting Congressional Republicans grant him the unilateral authority to raise the nation’s debt ceiling moving forward.

Where do negotiations stand now?  Nowhere … which means all American taxpayers are likely to see their taxes go up in 2013.

And while pundits point to January 1 as a day of reckoning for the U.S. economy, we may already be feeling the impact of the “cliff.”  According to data released earlier this week, the 2012 holiday shopping season appears to have been slower than analysts expected – with the stalemate over the “cliff’ cited as one of the contributing factors.

Well, even if the clock ticks past midnight on New Year’s Eve with no deal in place, the new Congress could take action to rescind some of the tax hikes associated with the “cliff.”  But will they?  And can anyone in Washington (well, all but a small handful of free market supporters) really be trusted to do what’s in the best interests of citizens and taxpayers anymore?

America is fundamentally out of balance, people … struggling to sustain a massive federal government that has veered wildly into a host of speculative endeavors and non-core functions taxpayers have no business subsidizing.  Yet rather than address these excesses with long-overdue cuts, both parties are debating over how best to stick taxpayers with the bill …

Is Mister “Read My Lips” Dead Yet?

US Senator Busted For DUI