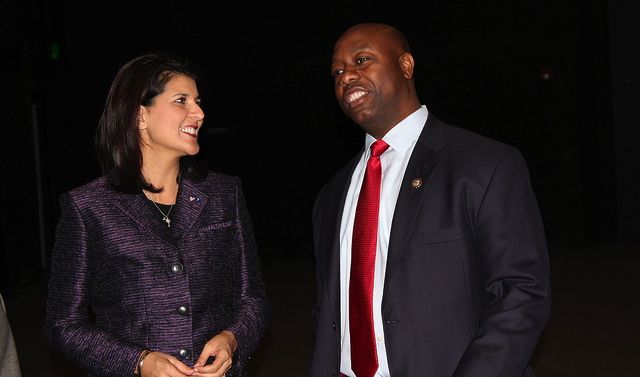 NOTHING SAYS “THANK YOU” LIKE A BIG PILE OF CASH

U.S. Senator-designate Tim Scott is wasting no time raising campaign funds for the woman who appointed him to his new post – an ethically dubious fundraising pitch that was accompanied by all sorts of fawning praise for S.C. Gov. Nikki Haley.

Less than 72 hours after being tapped by Haley to fill the U.S. Senate seat being vacated by fiscal conservative champion Jim DeMint, Scott is already assisting Haley in raising money for her 2014 gubernatorial reelection.

Talk about a new land speed “pay to play” record.

I was honored earlier this week when Governor Nikki Haley gave me the opportunity to replace outgoing Senator Jim DeMint.

Watching the Governor from afar has been incredible. I can’t imagine the daily pressures of governing this state. But I can see with clarity the conviction, integrity, and character that she governs with.

The Democrats are already in attack mode against her, and as I send this, they are already preparing their smear campaign against the Governor in the next election. We need Nikki Haley in office to continue fighting for the conservative principles we hold so dear. I understand it is the holiday season, but Governor Haley needs just another $27,450 to end this month strong.

Please consider making a donation here to help her reach her goal.

This is only the beginning, but the future is incredibly bright and looks great in our state!

South Carolina is better because we have Nikki Haley as our governor and I look forward to working with her for a long time to come.

Aside from Scott’s patently ridiculous assertions that Haley is governing with “conviction, integrity and character” (huh?) or fighting “for the conservative principles we hold so dear” (what?) or his claim that “South Carolina is better because we have Nikki Haley as governor” (did he mean to say “Georgia is better?“) – talk about a shameless move.

Seriously … how unseemly is this appeal?  This guy hasn’t even been sworn in yet and he’s already paying off the person who appointed him.

So … how much cash is Scott on the hook for with Haley?  We don’t know … but we’re sure Boeing and others who have bought his vote in the past will be more than willing cover the tab.  And however much Scott agreed to raise for Haley, it’s obviously more than the $400,000 IOU Haley has with former S.C. First Lady Jenny Sanford.

As we’ve noted previously, Scott doesn’t know his ass from his elbow when it comes to assessing “integrity” or “conservatism” in other politicians.  Remember, this is the guy who recently praised corrupt, fiscally liberal S.C. House Speaker Bobby Harrell along similar lines.

More than his demonstrably false fawning, though, Scott’s fundraising efforts on Haley’s behalf make it painfully clear that DeMint’s Senate seat was for sale to the highest bidder from the very beginning.  The only question left to answered is how much it cost – and who negotiated the fee (our money is on Haley’s longtime political consultant Jon Lerner, who reportedly played an integral role in negotiating Haley’s “Savannah River Sellout“).