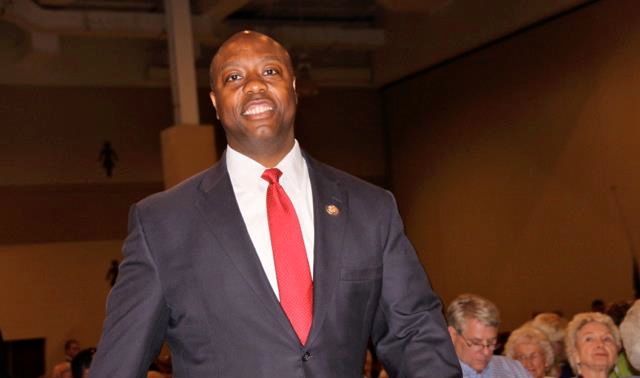 POLITICAL PRESSURE, FINANCIAL PROMISES SAID TO BE AT THE HEART OF HIS “FLIP FLOP”

Scott was initially opposed to reauthorizing the bank – and raising its borrowing capacity – but this trio of anti-free market politicians convinced him that it was in his best political interests to support the boondoggle.  Boeing is also alleged to have promised Scott hundreds of thousands of dollars in campaign contributions.

Not surprisingly, these loans make it harder for U.S.-based airlines to compete – which costs them jobs.  This diminished competition also results in higher airfare costs for consumers.

Anyway, Scott – who was elected as a “Tea Party” leader – has become increasingly unreliable on fiscal issues of late.

Not only that, he recently endorsed the reelection bid of Harrell – one of the most corrupt, fiscally liberal legislative leaders the state of South Carolina has ever seen.  In cutting a television ad on Harrell’s behalf, Scott claimed that the scandal-scarred Speaker “protected taxpayers” and “had integrity” – claims which should have immediately prompted lightning strikes.

This website endorsed Tim Scott in the 2010 GOP primary because we believed that the limited government, pro-free market rhetoric he campaigned on was going to be accompanied by votes consistent with that rhetoric.  And for awhile Scott did vote consistently with the taxpayers.  More and more frequently, though, he has evolved into a tool of powerful legislative leaders at both the state (Harrell) and federal (John Boehner) level – putting his own career advancement ahead of the best interests of the people he is supposed to be protecting.

Like Haley, “Republicans” will continue to elect Scott because he’s a minority and the party needs non-white faces to sell its new message of revenue enhancements and slightly less explosive and unsustainable government growth.

That’s not the message Tim Scott campaigned on, though … which leads us to believe that he is well on his way to become yet another “Republican” sellout.

Every man has his price.

Agree w smirks here. Every man has his price.

Is Scott’s price 40 acres and a mule?

Also known as prostitution. Not very Christian, is he?

He’s like the rest of them now. It doesn’t take long.

Since when has Scott been fiscally responsible…? He is so proud of his vote for the US to not pay it’s bills. It’s fiscally responsible to welch on your debts? His vote to not raise the debt ceiling reminds me of the sherif in Blazing Saddles when he has the gun to his head .

Along with little Mulvanney, he counts votes and when he sees the bill will pass, he “courageously” votes against it.

Typical politician. Votes for what lines his pocket and get him ahead.

Maybe he is the bastard child of Clyburn.

If he is, I suspect we’ll see lots of buildings and whatnot with his name on them in the near future.

Has anyone ever seen this guy with a woman?

Houseboys have to toe the line…

Ask Obama why he kisses up to Warren Buffett and Mr. Soros so…

why is it “courageous” when demint votes like his handlers and owners tell him to do..

but its a sellout and caving in when someone else does so?

It’s not. They’re both courageous. I’ll even say the Demlicans are a bit more courageous than the Republicrats.

Neocons want liberlism. Libtards will drop you like a bad habit for voting for a tax decrease or allowing people to keep their own hard earned money. That means the gubmint has less to hand out to them.

Boeing is part of the military industrial complex.

They close shop tomorrow unless the Feds buy lots of product from them.

I flew on a Boeing 757 yesterday. I guess that is one of those military industrial complex planes.

Actually a great deal of our military fly coach or business. Its a big part of why the airlines can afford to sell you a ticket from LA to Frisco for $29 round trip. That and the landing fees they recieve, per passenger on the order off $500+, is the only reason we have such low airline prices here.

They will frequently lease fleets during wartime in order to not have to buy the planes themselves. Cost a fortune to have a fleet of 737’s lying around so you can transport troops. Can’t say I agree or disagree.

Nevertheless, Andrew has shit for brains if he thinks Boeing’s only product is selling to the military, or that the military wants any more product from them and other war machine producers.

But But But the tea party elected this guy. We all know Republicans are the good guys protecting us from the evil socialism the democrats are pushing. Where is Big T when you need him?

and why should Scott not be a liberal RINO? all black politicians who join the GOP get on the garvy train. In fact, the gravy train is the chief motivator.

after Obama smashed Rpmney at the polls, be on the alert for an actual defection to the Democratic party by Scott, followed by a life on K Street with a home in the beautiful DC suburbs such as McLean Va.

He’s Boehner’s beyotch. Going along to get along.

Boeing is more important to the US than a few airlines, which come and go since they are paper constructs.

We must have a highly capable aerospace industry. Fuck the so-called “free market” when that’s at stake.

Our international COMPETITORS laugh at “free market” ideals, and their profits prove they are making correct choices. Grow the fuck up.

Business is war, and government fused with business got the US the prosperity we all enjoy.

Speaking of price, who pays YOU? We know who pays everyone else, but someone is paying your bills. We hear it’s trial lawyers and Democrats.

Scott is a Little Black Sambo, an Uncle Tom, begging, currying favor with white crackers — twice weekly by e-mail — for campaign money. His e-mails are hyperbolic, breathless, stoked with contrived drama, always demonizing democrats (all of them are evil). All this even though he has no serious rivals and he acts out more conservative than Rush Limbaugh. Something unbalanced with this man.

BS Benson you D&*%licking racist whore. The color of their skin has nothing to do with it. Republicrats and Demlicans alike prefer to bleed their constituents alive.

You just figured out he was a tea party fraud? LOL. this site is such utter bullshit! here’s how it works with womanbeater will, every time going all the way back to sanfraud: tout these fake political scum as people who really believe their fraudulent messages- like a true believer, then endorse them and obfuscate their obviously transparent message (intentionally contrived to convince the truly naive and gullible aka the entire SCGOP), continually repeat that they are “fiscal conservatives” over and over ad nauseam. then, when its obvious what they were all along, act indignant and weakly criticize them, but with all intent to endorse and pimp them again as soon as called upon to do so by handlers and controlling agents. dude’s nothing but a paid whore messageboy who spews the same garbage on a repeat loop. this lowlife womanbeater would sell ANYTHING if the price was right. O YEAH and he says he doesnt vote nor really care about politics except as his job, his business, and how he uses it to make money. the lowlife smackhead womanbeater openly admits it. LOL

Is that you, Nikki? Oh, maybe not…all the words are spelled correctly.