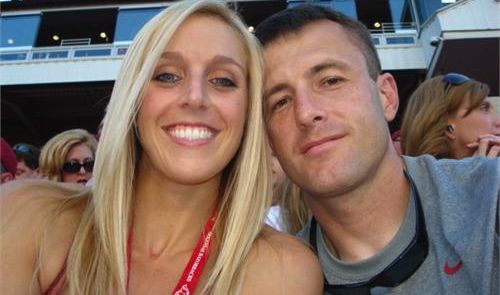 A few months ago this website exclusively reported that Jessica Dorrell – the mistress of former University of Arkansas head football coach Bobby Petrino – was coming to Columbia, S.C. with her fiancée Josh Morgan.

Morgan – a low-level athleticrat at Arkansas – was hired earlier this year by the University of South Carolina swimming and diving program.

Now it appears as though Dorrell, too, has landed on her feet (as opposed to her back) in the Palmetto State.  According to our sources, the buxom, 25-year-old blonde has been hired by the S.C. Association of School Administrators (SCASA) – one of the preeminent defenders of South Carolina’s worst-in-the-nation government-funded school system. 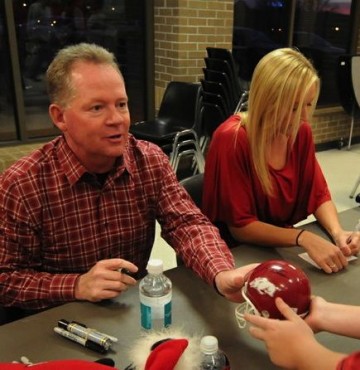 It’s not exactly clear what Dorrell will be doing for SCASA – a taxpayer-funded educrat lobbying organization – but our guess is that S.C. Senate “Majority Leader” Harvey Peeler (R-Cherokee) and State Sen. Nikki Setzler (D-Columbia) are making “staff” inquiries as we speak.

One source familiar with Dorrell’s hiring told FITS she will be working “a few hours a week” with the organization doing fundraising work.

“She really is a solid fundraiser,” the source said.

As supporters of market-based accountability in education, we obviously loathe the SCASA and the waste, inefficiency and diminished academic achievement its lobbying perpetuates.  However “times is tight” in the Obama economy and we’re not going to begrudge Dorrell for trying to scratch out a living.

We hope she fundraises upright, although if she did decide to go horizontal it obviously wouldn’t be the first time that’s happened in South Carolina.

Dorrell was an all-SEC volleyball player at Arkansas who was hired by Petrino as the student-athlete development coordinator for the Arkansas football program last year.  While working in that capacity, she and Petrino – a married father of four – began a physical relationship.

How do we know this?  Because Dorrell – who was engaged to Morgan during her affair with Petrino – was riding with the 51-year-old coach when he crashed his motorcycle on a rural Arkansas road in early April.

Petrino initially claimed that he was alone at the time of the crash – although that turned out to be a lie told in an effort to conceal his affair with Dorrell.  When the truth came out, he was fired for what Arkansas athletics director Jeff Long termed “a pattern of misleading and manipulative behavior.”

After winning 21 games in 2010-11, Arkansas’ program has sputtered this year – dropping to 4-6 on the season after last weekend’s loss to South Carolina.

Thanks To WACH Fox